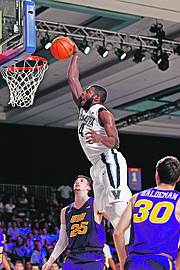 The Villanova Wildcats made tournament history by becoming the first two-time winners of the Bad Boy Mowers Battle 4 Atlantis.

The triple B’s - Jalen Brunson, Mikal Bridges and Phil Booth led the Wildcats to the 2017 title with a 64-50 win over the Northern Iowa Panthers at the Atlantis Resort’s Imperial Arena.

The trio of team captains also got key contributions from Eric Paschall who added 10 points and Donte DiVincenzo who scored eight.

Juwan McCloud led the Panthers with 13 points, Bennett Koch finished with 10 points and 12 rebounds and Tywhon Pickford had a near double double with nine points and 10 rebounds.

Ranked No.5 in the country, the Wildcats, who previously won the tournament in 2013, improved to 6-0 on the season while the Panthers dropped to 5-2.

Wildcats head coach Jay Wright said the opportunity to play in the Bahamas is one that his team is always eager to take advantage of.

“We want to thank everyone here at the Battle 4 Atlantis for a great Thanksgiving weekend. Everything is first class, that’s just part of what they do here. Everything is just perfect for a tournament and honestly we like it here, we play well down here“They’re smart enough, there’s a challenge coming here, everything is taken care of, you’re treated like a king, but this is paradise, there’s a lot of temptations here, and if you get caught up in that and that’s more important to you than being a good basketball player and a good teammate, that can affect you. These guys and the guys we’ve had over the years, they’re really

good basketball players, and they’re intelligent and they know this is a good opportunity to play great competition, and they take it very seriously.”

“One thing I learned (in the tournament) is that we don’t quit,” he said. “It’s something every Villanova team strives to do, to play hard for 40 minutes. We really got tested during this tournament, and we just kept battling back, kept grinding, kept sticking together and kept pushing through it. No matter what the fatigue was or what the score was or who the opponent was, we just kept pushing through it, knowing that we had each other’s backs.”

Bridges scored six of the first 15 points for Villanova, and their trap forced two turnovers en route to an early six point lead. Brunson got into the act with a pair of jumpers and along with Bridges, dominated early with 18 of their team’s first 24 points. UNI fought back and a McCloud layup cut it to one, 24-23, but Villanova took a 32-29 lead into the half.

Neither team could score in the first three minutes of the second half until Brunson broke the ice with another three pointer and a six point Wildcat lead.

Pascall followed shortly with a dunk down a wide open lane and the first double digit lead of the game 44-33.

Koch responded with back to back scores in the post and the Panthers lead cut to seven with 6:30 left to play. After a DiVincenzo score, Spencer Haldeman made a corner three but the Panthers wouldn’t be able to pull any closer. After two empty trips up court, Villanova made them pay with Bridges dished an assist to Booth for a three and a nine point lead.

The Wildcats appeared to wear down all three of their tournament opponents, winning the second half by a combined total of 37 points.

In addition, UNI committed 14 turnovers, while the Wildcats gave up the ball only three times. The Panthers also had a rarely seen statistic, failing to attempt a single free throw the entire game, as Villanova was whistled for just six fouls.

“I’m tremendously proud of the way we played this week,” Panthers head coach Ben Jacobsen said, “We just didn’t make enough plays today. We had opportunities and we just didn’t make enough plays today to be in a possession game down the stretch. The guys have done what they needed to defensively, they did a great job on the boards, we just didn’t have quite enough offense today but I love this team and we’re going to get better and we’re going to be right there when it matters.”