More Than 100 Deported - But None From Adelaide Beach Sloop 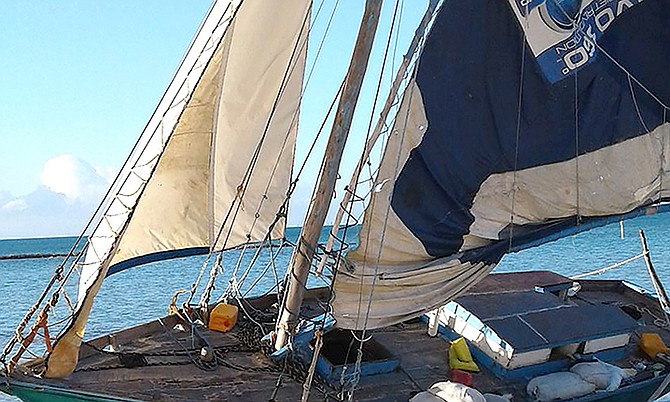 The sloop that was found on the shoreline of Adelaide Village in this photograph posted to Facebook.

MORE than 100 illegal Haitian immigrants have been deported in the weeks since a large empty sloop was discovered on the shoreline of Adelaide Beach, however immigration officers say none of the captured migrants is suspected to have been on board, according to Kirklyn Neely, head of the Immigration Department's Enforcement Unit.

In an interview with The Tribune, Mr Neely said no one is "admitting to being on the vessel" but immigration officers' efforts have still paid off. He said an additional 150 illegal Haitians, who were caught in about two weeks, are at the Detention Centre waiting to be deported.

"We are still searching, we are still looking. So far, we have sent 114 Haitians back home on a Bahamasair flight and 18 on a smaller plane. These are the persons who were caught since our search began for the persons on board the vessel," he said.

"We have an additional 150 Haitians at the Detention Centre waiting to be deported. It costs us about $45,000 every time one of those Bahamasair flights are chartered. We caught a lot of illegals but no one is admitting to being on that boat."

Authorities believe the immigrants who landed in mid-November had help from people already on New Providence and warned anyone who was found hiding them would be jailed, fined or both.

Mr Neely estimated between 150 to 250 undocumented migrants were on board the sloop.

The hunt for the migrants began three Sundays ago when the RBDF said it was investigating reports of a wooden Haitian sloop landing in the southwest area of New Providence.

The ship came ashore sometime on the night of November 11 or the morning of November 12, the RBDF said, adding that the number of suspected migrants on board were unknown.

The intense immigration sweeps since the landing have angered local activist and attorney Fred Smith, QC.

Mr Smith, president of Rights Bahamas (RB), has written to members of the government expressing displeasure about the "complete and intentional" breakdown of the rule of law regarding the actions of immigration officials and the Royal Bahamas Defence Force.

Comrades! You can walk up to counter at the airport and buy a non-reserved one-way ticket to Haiti for $279. Now, if you ask airline give you a special airfare discount for 114 in your group - they going give you bulk purchase whopping discount. Even at full airfare price $279 x 114, it equals $31,806. I thinking InterCaribbean Airways would be happy fly all 114 passengers - regardless of nationality - one way to Haiti for say $25,000. Be interesting to know if immigration department booked the flight themselves, or through a travel agent?

Hmmmmm. These illegals do not cooperate with the authorities because there is nothing to gain and will shelter and protect each other because of the greater ties that bind them by culture, poverty, language, food, same hometown, history, likely same human trafficking network, same Bah shantytowns etc.Years ago when Pres. Martelly visited unannounced at the Farrington RdCentre some 7,000 showed up in a matter of hours. A less understood part of culture is 'Restavek' where they are even prepared to even leave their children with others in hopes of a better life for them. What may seem like illegal economic migrants is actually Haitians colonizing the Bahamas as has been happening utilizing all means necessary.

Yeah I was wondering that. How can they tell who was on the boat and who was not?

Does it really matter? Either human cargo or contraband was on the boat. Illegals are being deported. That's a good thing!