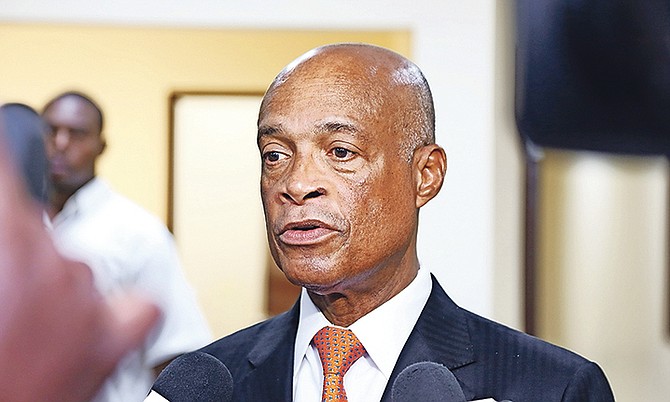 EDUCATION Minister Jeffery Lloyd has criticised those opposing the government’s decision to accommodate Dominican students and others following the destruction Hurricane Maria brought to their country, challenging naysayers to re-evaluate their Christian values and decide “for ourselves if we want to live it or we want to just talk it.”

Speaking on the sidelines of a dedication service for the re-opening of the Stephen Dillet Primary School, Mr Lloyd said he understood that as few as 20 students may opt to come to the Bahamas, with preliminary indications pointing to all of them enrolling in the private school system.

Mr Lloyd said government officials were still working to determine the extent of the country’s assistance to Dominica.

The South Beach MP was asked to respond to the scathing commentary by Pineridge MP Rev Frederick McAlpine in Parliament last week.

Rev McAlpine, a Free National Movement backbencher, recommended that wealthy Cabinet ministers take money from their own pockets to contribute to the Dominica’s restoration efforts, rather than give its citizens safe haven in the Bahamas.

He also recommended the government pay Bahamians to work in Dominica and help with restoration instead of allowing storm victims to have safe haven here, as he suggested they may never leave once they get used to a better standard of living.

And in what appeared to be a swipe at Prime Minister Dr Hubert Minnis, who wiped tears from his eyes earlier in the day as he spoke of the destruction in Dominica and the harsh reactions some have had to his plans to help citizens there, Rev McAlpine said he was crying for his own people.

Mr Lloyd, who yesterday hadn’t heard or read the comments first hand due to his recent trip to Washington for the Inter-American Committee on Education, said he had to accept the remarks through the prism of freedom of speech and democracy.

However, Mr Lloyd said as a man who took his Christian beliefs and responsibilities “seriously,” he could not subscribe to any viewpoint that set aside compassion, generosity and willingness to extend oneself as prescribed by Christianity.

“This is what [Christians] are called to do,” the South Beach MP told reporters. “Jesus spoke of: ‘I have come to serve, not to be served.’”

Mr Lloyd, clearly irritated by the nature of public discourse since the government’s initial decision, questioned how the Bahamas could call itself a Christian nation, if its people are hesitant to help those in need.

“I subscribe to that which is enshrined in our Constitution, that we are country undergirded by spiritual and Christian values. And I take my Christian commitment seriously.

“I don’t talk this, I live this and one of the principal expressions of Christianity is compassion and generosity and a willingness to extend yourself even beyond your own needs, to assist a needed brother and/or sister,” Mr Lloyd said.

He continued: “So we have got to take a look at ourselves in the mirror as a Christian country, supposedly, and ask ourselves if we understand what that ethic really means. And then we can determine for ourselves if we want to live it or we want to just talk it. And it is easy, of course, which of those we can do.”

“But I am a serious Christian and I mean that. I live that in every fibre of my being. I don’t have time to talk it.”

Of the Minnis administration’s decision, Mr Lloyd said: “The government would have done what any Christian, compassionate, sensitive people would have done; people who would have done for us in our time of need when our own country was afflicted by the passage of natural disasters.”

He said the Bahamas, following many natural disasters, has been the recipient of donations from many countries throughout the Caribbean; specifically a $100,000 donation in aid from Dominica post Hurricane Matthew last year.

Referring to the two-island nation of Antigua and Barbuda’s decision to accept roughly 1,000 Dominicans despite the destruction Barbuda sustained during the passage of Hurricane Irma last month, Mr Lloyd called that country’s efforts “magnanimous” and a stellar example for the rest of the Caribbean.

Mr Lloyd added: “Here is a country, a twin country, that itself has suffered from the most damaging effects of Hurricane Irma, where Barbuda is virtually wiped off of the map and yet, this Antigua and Barbuda country is receiving over 1,000 Dominicans.

“They themselves reeling from this serious damage. But yet they are there offering, in this time of desperation for themselves, offering this extension of generosity.”

“How magnanimous. . .. How we in the Bahamas, as blessed as we are, cannot do the same?”

FNM just don't get it. Dominica is getting more from our government than Bahamians are. This country is in deep shit and they worrying about Dominica. Worry about Freeport. Worry about Ragged Island. WORRY ABOUT THE BAHAMAS...

That is the point that Minnis is missing ...... for political brownie points!!!!!!! Just give them a donation (200K) and let us get down to fixing our own broken country (thanks to Hurricane Perry).

Comrade Father, forgive them - cause { I am not making up } - how we see a striking disinterested of kindred hearts towards those of your own kinds of poor and near poor - who were promised "NO MORE VAT on their Bread Basket Items" but were lectured, "Tis not your time" cause the public purse is empty of funds.

Tal...we truly cannot afford to remove VAT from breadbasket items. Bear in mind that for a significant portion of this country THAT is all the taxes they pay.

Proudloud...you are right. I would go further and say nobody is going to worry about the Bahamas until our currency is devalued. Even then they will say we are blessed because we are next to the USA so we have no cause to complain.

Im sure there are at least a million out of the 12 million in Haiti who go to bed hungry many nights. Lets bring them all here and feed them starting tomorrow. Isn't that the Christian thing to do? Lets quadruple our population over the next two months. Why not?

I hope that the Bahamas never endures the type of devastation that hit these countries. If it does and you lose everything. I wonder if you will have the same view of someone/another country reaching out to help you.

The Bahamas is not immune from disaster and may also need this same level of assistance one day. Actually the Bahamas has already been a recipient of aid. As the minister noted in the article: " He said the Bahamas, following many natural disasters, has been the recipient of donations from many countries throughout the Caribbean; specifically a $100,000 donation in aid from Dominica post Hurricane Matthew last year."

Only the most foolish of individuals would ever believe they have the right to determine and say who is and who is not a Christian, while at the same time boasting of their own Christianity. Jeff Lloyd is truly a very small man in more ways than one!

He lives his Christianity with every fiber of his being. only when it is convenient. Is the former deacon serious? and who does he think he is fooling? even persons who voted for him are beginning to see the light.

This Minister of Education is stuck in the private education system of the 1970s ....... smh

Comrades! The majority of the poor and near poor will not be helped by simply creating more low paying jobs. Fact is, 165,444 of Bahamaland's poor and near poor are already filling those lower wage positions. They are the 'working poor and near poor" - who most need VAT removed from "Bread Basket Items".
Bahamaland, has no good excuse, not to offer its citizens BahamaCARE Nationalized Medicine, along with a Yearly Guarantied Income" of $24,400.00.
It's a national disgrace that we are burying "3 to 6" Paupers bodies in the Poor and Near Poor Peoples burial plots, intended one deceased.

What y'all really should be concerned about is why all our natural resources are being taken out of this country and only a handful of Bahamians are benefiting. It was discovered in the 1980's that the Bahamas, like Haiti, has billions and billions of oil right under our feet. These oil reserves are worth trillions of dollars. Enough to make every single Bahamian a multi millionaire (that's just from oil not salt and aragonite and other resources yet). Yet the country continues to be saddled in Billions of dollars in national debt. The power grid i and generation facilities are near collapse and unreliable, and every Bahamian household struggles to pay outrageously high electricity bills. Over 1000 Bahamians, mostly young males, been murdered over the past decade and diseases like cancer, diabetes AIDS and hypertension is threatening to wipe out the native Bahamian , if only financially. Yet we cry about rendering assistance to a country less than half the size of ours when we all are suffering the same plight.

Prediction: Minnis will be ousted in a vote of no confidence by Cabinet and removed (like he was before) by the Governor General before the end of March.

stop drooling in ya dreams, y'all PLP's are so shallow minded and backward thinking.

Wow......sounding so much like Fred Mitchell..wonder if we done gone jump from the frying pan into the fire