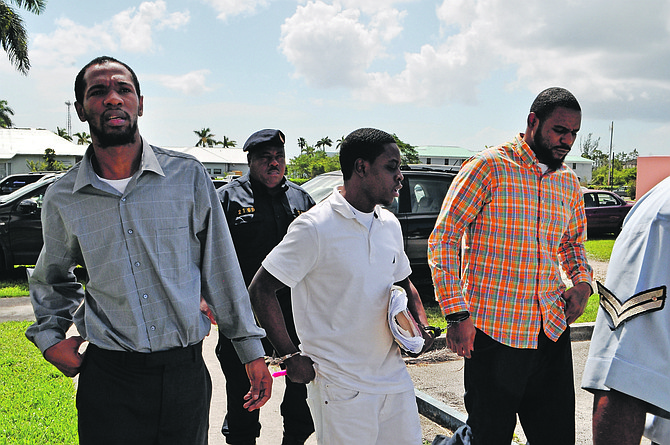 Pictured are the three men accused of the double slaying of a Grand Bahama couple. Seen being escorted from the Supreme Court in Grand Bahama yesterday are (from left) Kevin Dames, Devaughn Hall and Paul Belizaire. Murder charges were dropped against Allan Alicime and Virgill Hall, who accepted a plea deal with the Office of the Attorney General to testify as witnesses for the Crown. Hall and Alicime were convicted of armed robbery and are currently serving time in prison. Photo by Vandyke Hepburn.

The bodies of Barry and Sheena Johnson were discovered some 12 hours after they were brutally murdered at their residence in Deadman's Reef, the Supreme Court heard yesterday.

Details of the murders were given during the opening of the murder trial for three of five men arrested two years ago for the couple's murders.

Paul Belizaire, Allan Alicime, Devaughn Hall, Virgill Hall, and Kevin Dames were originally charged with the murder and armed robbery of the Johnsons, who were found shot to death on September 13, 2015.

Two of the accused men, Allan Alicime and Virgill Hall, have turned witnesses for the prosecution.

Crown counsel Erica Kemp told the Court both men accepted a plea agreement with the Office of the Attorney General.

The murder charge was dropped against the pair, who were only convicted on the armed robbery charge. Kemp said they are currently serving their time in prison, and have decided to give evidence for the prosecution.

The case is being heard before Justice Estelle Gray Evans, and a jury of seven women and four men have been empaneled to hear the evidence.

Kemp said the couple was discovered by a tenant who resided in a unit of the Johnsons' triplet apartment on the morning of September 13, 2015.

The tenant had heard gunshots the night before sometime around 9pm and 10pm and a vehicle leaving at a high rate of speed. The next morning, she discovered the bodies of her landlord and his wife, and called the Police.

Barry Johnson was an employee of the Freeport Container Port, and his wife, Sheena, was a teacher at the Eight Mile Rock High School. The deaths of the high school sweethearts shocked the Grand Bahama community.

The prosecution's first witness - Police Detective Sterling Francis 3174 of Criminal Records Office - arrived at the scene in Deadman's Reef around 10.20am on September 13.

On his arrival, he said a crowd of spectators had gathered in an area a few feet from the residence and another female officer was already at the scene, which was later cordoned off.

He saw the body of a dark male in an orange Freeport Container Port coverall lying face down outside in the pathway to Apt 7 with an apparent gunshot wound to the head. Officer Francis later saw a dark-skinned woman in an aqua and white-coloured blouse and blue panties lying down in Apt 7 with a wound to the head and forearm area.

He also discovered a projectile in the ceiling of the couple's living room. He took photographs of the bodies, the projectile, and of the exterior and interior of the apartment.

Francis also attended the autopsy of the couple which was performed on September 15 by Pathologist Dr Mandy Pedican at the Rand Memorial Hospital morgue.

He took photographs with a digital camera of the post mortem, and collected biological samples taken from the deceased for a post mortem kit.

Defence counsel Geoffrey Farquharson had objected, claiming that photographs taken on the digital camera and downloaded from the memory stick via a computer to a CD was inadmissible because that evidence was not included in the document in the Voluntary Bill of Indictment, although it was disclosed in discovery produced by the prosecution.

Justice Evans overruled his objection and allowed Francis to proceed.

Officer Francis then told the court that he downloaded the images on to a CD and later made photographic enlargements, from which he made several albums. Both were entered into evidence as exhibits in court.

Francis described each of the photographs in the album, some of which were very graphic showing bullet wounds to the heads of the couple, lying in a pool of blood.

Neil Brathwaite and Erica Kemp of the Office of the Attorney General are appearing on behalf of the Crown. The trial continues.