Mixed Views On Who Should Lead 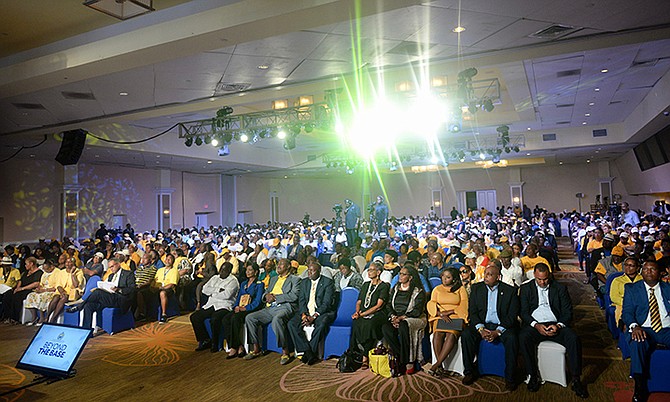 DELEGATES at the Progressive Liberal Party’s (PLP) 53rd National General Convention had mixed views about who should be the next leader of their party with many saying it is time for interim Leader Philip “Brave” Davis to take the reigns and others championing outspoken Englerston MP Glenys Hanna Martin as the best person for the job.

Mrs Hanna Martin is the first woman to vie for party leadership, and while gender was decried as a deciding factor, it was a recurring theme among people canvassed by The Tribune.

Supporters on both sides underscored the integrity, political legacy and fortitude of each candidate, both of whom were among only four PLP candidates to win seats in a devastating 2017 election run. Both candidates were the only Cabinet ministers in the Christie administration to win their respective constituencies.

“When it’s coming near to the voting (it may pick up), but I guess it’s probably one consensus among the people where we know we need a new leader, it’s just who. (In January) it was time consuming because trying to get a new leader with the election a couple of months later it would have been a bit confusing. This is the first step towards rebuilding this party.”

Mr Rolle told The Tribune he firmly supported his MP Chester Cooper, who is running for deputy leader; however, he said he was still weighing his options for the leadership ticket.

Mr Davis and the Exuma MP toured the Family Islands, courting delegates for support as an apparent team ahead of the organisation’s October convention.

“This is what a convention should look like everyone trying to do what they can in the last minute rush but also being respectful to others.”

“This is exciting, I admit that I was surprised because January was a bit more contentious with the whole ‘one leader’ thing but right now it’s very healthy, and this is what we call democracy.”

Mr Johnson said on Monday: “The energy is more of sombre energy because we know at the end of the day we came here to do business. A lot of people are in there (morning session) trying to understand what we think the way forward should be and to contribute to what they think we should do going forward so they know the leadership is a part of it but that’s only one part of it this is about moving forward.

As former minister of works, Mr Davis, has underscored the need for the party to “renew and rebuild,” highlighting much needed reforms to the party’s constitution to ensure it met modern expectations.

Many of his supporters stressed on Monday it was “his time” to lead the party after reportedly being promised an opportunity well ahead of the PLP’s 2012 election victory, adding that the leadership post was firmly rooted in succession.

A contingent from San Salvador praised the MP, pointing to his extensive support of the island community and their families.

Ricardo Clarke, a 40-year-old Centreville supporter, said: “I’m here supporting ‘Brave’ Davis because I feel when you become the deputy you become next in line for leadership. Mr Davis didn’t jump the chair, he took his time and now it’s his time. We should rebuild the party before we get into something we shouldn’t get into.”

Mr Clarke stressed that the former deputy leader had long been carrying the party on his back and shoulders, and as such, “respect was due.”

When asked what was different about the two conventions this year, he said: “What’s so different is you have some people trying to play man, trying to get in a race where they’re not supposed to be, respect the chair.”

Asked to clarify, Mr Clarke explained that Mr Davis should automatically become leader given his tenure as deputy leader. He said protocol dictated Mr Davis would then pass the reigns on to Mr Cooper, adding that the outcome of both the gender equality referendum and American President Donald Trump’s election win over Democratic rival Hillary Clinton signaled voters did not want a woman leader.

Mr Clarke said: “What I’m trying to tell you guys is in life what ain’t supposed to be for you ain’t for you. (Mrs Hanna Martin), she fit good, she would have run (as) a good chairman, or if you say a deputy, but I like Chester Cooper in favour because he’s young and vibrant and he had a lot to give and learning from ‘Brave’ Davis he can take this country to a different level.”

In a bid to liven the mood in the lobby, Calverna Small, 56-year-old Golden Isles stalwart councilor, and a handful of supporters chanted: “Be Brave, be brave, If you ain’t brave don’t go hunting. Stay brave! It’s Brave time.”

Ms Small, first vice chairman of the PLP Women’s Branch, said: “You gotta get hype with this thing. From 2009 Perry Christie promised that in two and a half years he was going to demit office and give ‘Brave’ that opportunity. ‘Brave’ has never been given an opportunity, now it’s ‘Brave’ time. I’ve been around the PLP for the last 37 years, it’s ‘Brave’ time. It has nothing to do with gender, the PLP party has a protocol where you tow the line it passed on from Sir Lynden.”

Ms Small continued: “It ain’t Glenys time yet because even Alfred Sears before Glenys. We don’t have a problem with women, my thing is the party needs change especially with women, and Bahamian women know we act on emotions and attitude right now.

“This party needs to be rebuilt, reenergised, rejuvenated, it has personally nothing to do with Glenys because I love her, but it’s ‘Brave’ time.”

In January, former Attorney General Alfred Sears threw his hat in the ring against then PLP Leader and Prime Minister Perry Christie, a move some considered a threat to the party’s stability due to the proximity of the general election. Mr Christie resigned as PLP leader days after the party’s election loss in May.

On Monday, Mr Sears released a statement saying he would not accept a nomination for a leadership position.

Mr Sears campaigned on a 26-page manifesto outlining his vision and policies for sustainable national development through, among others initiatives, empowering local government and implementing anti-corruption policies.

At her campaign launch, Mrs Hanna-Martin called for transformation in education, a renewed fight against poverty and efforts to combat the deteriorating health of Bahamians, an issue she said was nearly a crisis.

Branwell K Rolle, a 49-year-old Englerston stalwart councillor said he stood behind his representative because she represented the strongest voice of the Official Opposition in the House of Assembly. For him, a grave and long-standing concern was the deleterious impact of unchecked campaign finance on both party and national elections.

“(Campaign finance) It should have been at the forefront for a long time,” Mr Rolle said, “and I don’t know why it’s not because I feel you get better representation and the better execution of your promises while campaigning if you have a limit on a campaign financing. It also shows a form of bribery because you have people in a position where they can’t help themselves then you prey on that.”

Mr Rolle continued: “If you ask someone what they voting for they just say (a candidate) you ask them why, ‘because he give me a couple of dollars,’ it’s so sad that the party has come to that level and I hope that they will find a way to solve that issue. Our seriousness in appealing to the wider public will be determined after Wednesday, the public will judge us after Wednesday.

Mr Rolle said: “The best leader for the party is Glenys Hanna Martin, a woman of integrity, well accepted throughout the country. She mash up the entire House (of Assembly) by herself but not only that she’s well-respected from across the other side, they always complement her. She has a track record in her ministry as opposed to her opponent, I say that without contradiction and without fear.”

“Honestly speaking I believe he might win,” she said, “I tell you one thing all is one, and we’re not supposed to be separated from each other. But I think she will give him a good good run and that’s what you need, to know that someone is here for you. Everything will work fine, and we don’t want it to be no malice with nobody, we don’t need that. It elevates the leadership a challenge like that. I want solidarity. I want to keep it together.”