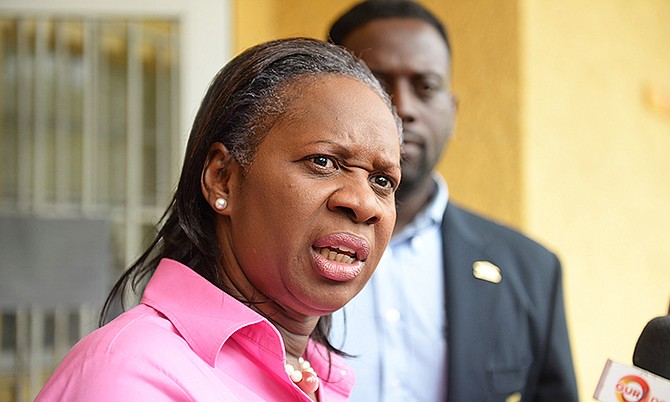 A VIRAL video of junior high school girls gyrating on a platform as fellow students watched and cheered at a public school function drew outrage yesterday.

Bahamas Union of Teachers (BUT) President Belinda Wilson said the video features students of H O Nash Junior High School during an event at the school's “fun day” on Tuesday.

The video shows three girls, believed to be ninth and eight graders, gyrating to dancehall music during a dance competition on an elevated platform in the school's assembly area as other students watch.

At one point, a boy jumps on the platform and runs directly behind one of the girls, staring at her bottom as she gyrated while bent over. A second girl then jumps on stage and begins twerking before she dropped into a split, prompting cheers from other students. A third girl then comes on stage and starts to gyrate suggestively. A disc jockey is overheard encouraging the students’ behaviour.

At one point during the video, an adult male is seen walking through the throng of students, but it is unclear if he is a school official.

"Someone should have been there to monitor them," she said.

When The Tribune spoke to her yesterday, she had not yet spoken to the school's principal.

"I would have to get the information from the principal as to if there were persons assigned to monitor the dance," she said. "When you have a fun day, you would have different areas of responsibility for each teacher or department. It begs the question as to who would've been assigned to the dance."

Ms Wilson stopped short of saying someone should be disciplined for not monitoring the children.

Education Minister Jeff Lloyd spoke to local broadcaster Our News about the issue yesterday, placing the blame on the way some parents raise their children.

“It is disturbing, there is no question about it, but that’s not the fault of our schools. These children come from a home . . . somebody namely parents, guardians, whomever, are responsible for their conditioning," Mr Lloyd told the news station.

“Where is this behaviour learnt? Not at the school.”

Mr Lloyd said he would await the full report on the incident before determining what punishment, if any, would be given out. However he said he was in full support of the school and its principal.

The Ministry of Education also released a brief statement on the controversy yesterday, saying the matter was being looked into.

“The Ministry of Education is aware of a video circulating on social media in which it appears that students are dancing inappropriately on a public school campus,” said the statement from Acting Director of Education Marcellus Taylor. “We await the findings of an internal investigation to determine what future course of action will be taken.”

Across social media, people reacted angrily as the video drew thousands of viewers.

"Minister of Education, please as a mother, we crying out to find out what went wrong here in this video - and now should fun day be removed out of the schools?" wrote one person on Facebook.

Another said: "If this is a school sponsored event, the head master/mistress should be removed from office. This is a disgrace. The school yard is not the place for this type of performance. The young girls are inviting boys to treat them with disrespect and possibly encouraging rape. Thank God these are not my girls––as a parent I would be ashamed."

Not everyone thought outrage was warranted, however.

One user said: "This ain't nothing new…y'all went to private school aye? This been happening for years, the only difference is smart phones…good thing they wasn't around."

Man all we used to do is wine in ringplay when I was a kid. Hell. I remember wining in a play where all parents attended.

Let us concentrate on these no good fathers who abandon their children. That is our number problem in terms of family and community. Dancing, not so much...

This is a non-issue.

The princioal and teachers were probably all in the storage room taking inventory of their bullet proof vests and putting them on just in case anyone was planning to do something bad at the Fun Day. Thank God nobody did anything bad.

I don't think you can really compare the type of 'ring play' of yester-year to the twerking of today.
The dance moves today are far more sexually suggestive. Just look at the music videos that these children copy these dances from now... and the music videos of the 80s.

Comrade, realistically if we tell it likes it is, don't you thinks that the young ones does learn their dance moves nastiness from the adult participants at Kanavals Bahamaland.... all instructions in nastiness - courtesy Public Purse?

Tru dat. When you een gats money, the opiate of da people een religion, its sex. And we is da most hypersex of all da peoples -- maybe except da yardies. I must admit, I used to think dat da yardies is juss cool. Used to try an act like dems, smoking herb and having kids I doan about and such.

Man please. The wining we did was almsot identical to twerking. We simply wined around and around now they wine up and down. Pretty much the same motion...

Watching your comments you appear to have a hard on for Sebas and other 'web-shop' owners.

I take it most of your responses usually come from a position of jealousy.

Twerkin is the new ring play. How did one of the ring play songs go ‘take that penny sausage and put it up in there’ and the boys would wind up on the girls dem. Probably it was the first time some boys and girls found out their anatomy was different, playing ring play (and dolly house when every boy wanted to be the daddy and girls wanted to play mommy. And then the boys realize they couldn’t tuck their shirts in their pants after playing ring play. Not saying it was right nor is twerkin. We had a grandma. Somehow her timing was perfect for punishment. Just when the ring play got good you would feel this wet towel across your back. But cell phones with cameras and social media are taking all the fun and secrets out of growing up. Had it not hit social media the school master or mistress could have dealt with it internally. But now it has become a national issue. Then let’s not forget Goombay Summer. The young girls use to go down town to shake up they self. Was it 4-6 eeeks every summer. Then when schools reopened it was discovered that a lot of school girls were pregnant. (They been shaking alright). And even with Junior Junkanoo. Not until recently did they had to put a stop to what was becoming a contest in vulgarity.

It was with Goombay Summers that illigimate child birth exploded. Not only did the festival make young girls more accessible for sexual activity, but after a while it became fashionable for 16 and 17 and 18 years old girls to have babies. That was their first goal after finishing high school, if they didn’t get kicked out for being pregnant.

I suppose they calling it dancing? Let them dance so long as they do not kill each other the killings worry me.

People can justify this foolishness all they want. It was still very obscene for a 13 or 14 year old girl to be dressed in a skin tight dress and dancing like a stripper. In fact people assumed the first girl was a teacher. Now is the time for these children to learn respect for certain institutions, like their own schools. If they carry on like that in school, at this age, I shudder to think what they would do in a few years at workplace functions.

Isnt this an african fertility dance....?

We are a nation with strong and deep roots in Aftica culture way before Africa was chopped up in 1884 by the Eutopeans. Why we even had naked bare brested women in Africa. No need to be prudish. Whose culture is taught on the school curriculum...Haitian...English....African...Define Bahamian.....

When Miley Cyrus does it she makes more money..

Times have changed and would perfer this to school kids killing.

If Bogart believes that Africa was one country before being "chopped up" in 1884 by the Europeans then he mussa be a history or geography teacher in the public school system.

I saw that video, was just wondering what those girl GPA would be like.

Then when you listen to some of the music playing on some of these radio stations. Promoting vulgar sex, sale of guns, using and abusing drugs and every other antisocial behavior

Belinda Wilson needs a "good twerking" to put a smile back on dat face.

Fully agree John it is everywhere with easy access to the internet. Before the Church played a dominant role in the teaching of the Commandments, parents taught their children values of good broughtupsy. Times have changed, dress lengths have changed, it is a style to wear jeans with holes it. It is a common expression to say someone is a brother or soster with a dofferent mother. Times have changed. We want to be like Singapore but are not prepared to enforce existing laws like flogging and execution.

Am I the only person on the island that has not seen the video?

No. Last year I left one group after it became apparent they were fixated on dead bodies in the road and people fighting. Oh and those chain prayers :\

The worse things get, the more they get on their high "moral horse" Right. Adults lead children down the path, right or wrong. Evidence suggests......