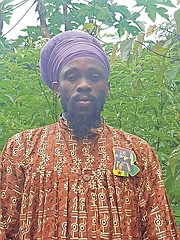 A herbal physician who is known for his talks on diabetes is scheduled to arrive in town today ahead of one of the biggest celebrations on the calendar of the Rastafari people.

Priest Kailash Leonce is chairman of The Great Physician International, a company that is geared towards “the eradication of disease using herbs, the biblical diet and sound social practices”.

“I studied medicine for two years at the Ciencias Medicas in Cien Fuegos, Cuba, after which I continued at The American University of Antigua College of Medicine where I completed the basic sciences in 2005,” he said.

“Having gone through medical school and the study of the implementation of herbal medicine in different times and cultures, we decided to take a right turn to pursue a practice in herbal medicine. Being equipped with the knowledge of the basic sciences (pathology, biochemistry, pharmacology, nutrition, physiology) and the pharmacokinetics of the phyto-chemicals found in the herbs, we are well placed in a position where we can efficaciously treat the disease conditions that plague our nations.”

Diabetes is a non-communicable disease which affects many people throughout the Caribbean, so much so that studies are ongoing to determine how to stave off rising statistics. Diabetes is the fifth-leading cause of death in The Bahamas for all ages locally, with a rate of 29.2 deaths per 100,000 persons annually.

“Diabetes is known as the silent assassin as it destroys the life of its victims mercilessly, from the daily amputations, blindness, organ failure and eventual death,” he said.

The Great Physician International “features a line of products catering to the healing and restoring of proper functioning of the male and female body, for adults and children”. Priest Kailash has authored The Sugar Baby - Naturally Eradicating Diabetes and The Food of 7 Cook Book.

Priest Kailash a long-standing member of the Bobo Ashanti tribe, a sect of Rastafari, which operates as the Ethiopia Africa Black International Congress. The congress has branches all over the world, including at Fire Trail Road East, New Providence. He visits to share lectures and launch his new herbal book, and will participate in Coronation Celebrations, which honour the coronation of Emperor Haile Selassie and Empress Menen on November 2, 1930, in Ethiopia.

He thought it a fitting time to launch his book - The Herbal Manual The Matrix of Medicine - and visit The Bahamas to commune with church members here, while sharing his knowledge with the general public.

The House of Rastafari has invited him to serve as the special guest speaker at its House of Rastafari Council of Elders Appreciation banquet at Akhepran International Academy’s Tehuti Temple on Sunday, beginning at 7pm with $20 admission.

University of the Bahamas students and the general public are invited to his lecture at the Harry C. Moore Library on Monday, October 30 from 7 - 9pm, where he will launch his latest literary work. Students of Akhepran International will hear from the herbal physician on Wednesday at the school at Tehuti Temple from 2.30 – 3.30pm, where parents are invited. President Jacinta Higgs says this lecture will be a part of the school’s pilot project for their Obesity Prevention Programme.

Priest Kailash will minister from the altar at the EABIC Bobo Ashanti grounds at Fire Trail Road East for its all night church Coronation celebrations, including “Ital” food and ancient Nyahbinghi drumming.

• For more information on Priest Kailash and his products, visit www.foodof7.com and www.priestkailash.com.