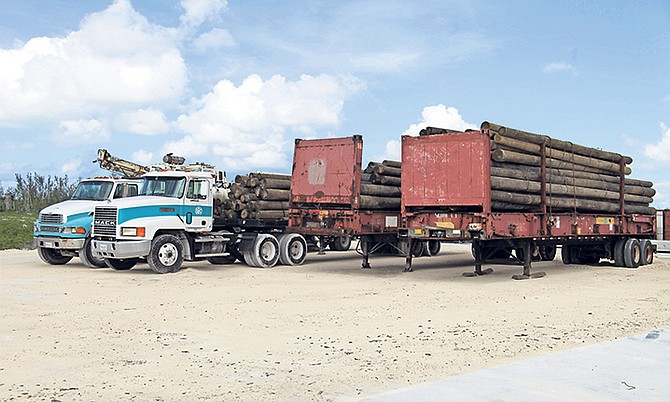 DESPITE challenges with water supply on Ragged Island, clean up efforts are nearly complete as residents forge ahead in restoring their homes more than a month after Hurricane Irma decimated the small island.

According to Elliott Lockhart, QC, spokesperson for a group of descendants who have banded together to get the island back to normal, clean up is about 75 per cent to 80 per cent complete.

However, Mr Lockhart said the government’s intended plan for restoration on the island had yet to begin.

At the time, the prime minister explained renewable energy and smart technology from solar energy and sustainable water purification systems would be utilised for this effort with the help of residents and descendants of the island.

When he was contacted yesterday, Press Secretary in the Office of the Prime Minister Anthony Newbold said the committee to spearhead the Minnis administration’s intended efforts had been formed, but he was unsure of the progress of this work.

Mr Lockhart said: “The clean up of the debris is about 75 per cent to 80 per cent clean and cleared. We have already gotten a lot of the debris off to the landfill.

He added: “We have done a lot but have a lot more to do. The electricity distribution system is operational but I don’t think all the individual homes have been connected because they haven’t been cleared by the Ministry of Works as meeting the standard to be hooked up to the grid.

“And water is still a challenge. It is being manufactured and distributed but not in the quantity for continued supply and the reverse osmosis plant has not been received yet.”

Asked whether the plan outlined by the prime minister had been executed, he said: “The prime minister indicated their intention. The committee dealing with that plan hasn’t been formed neither has it met as yet. But he indicated intention and identified the people and ministries that are going to be participating in that committee along with members from the restoration Ragged Island committee.”

In September, Dr Minnis told Parliament the government would seek not only the assistance of Bahamians, but look to international counterparts to restore Ragged Island.

However, he did not reveal a cost to be associated with this undertaking, adding Minister of Finance and Deputy Prime Minister K Peter Turnquest would offer details at a later date on the price tag of Hurricane Irma’s related costs. Those details have yet to be divulged.

Hurricane Irma’s destruction of the island prompted Dr Minnis to deem the island unlivable in early September as he urged those remaining there to evacuate following the storm because of major health and safety concerns.

Rotting animal carcasses and the destruction of all essential services led Dr Minnis to strongly urge those still on Ragged Island to leave until the small community can be restored.

Despite this, residents of the island at the time said they were determined to go back home immediately and rebuild despite the decimation left by Irma.

Hubert and Peter them aint do sh*t yet...however they made loads of promises.

Thank you KHRISNA RUSSELL for the long drawn out version.

After all doc did not cry for Ragged Island. Was it doc who said they should Ragged Island and go else where?l

Typical bahamian politician. Make promises and don't know how to get them done. Just like the previous PM.

You notice that too eh...