Jonquel Jones Wnba Most Improved Player Of The Year 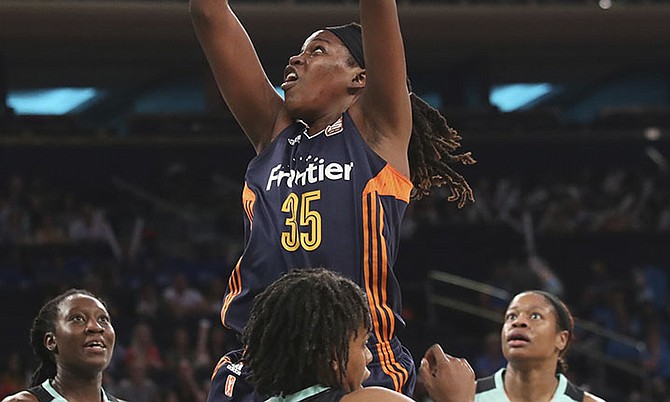 It has been a phenomenal year for Grand Bahamian Jonquel Jones and the Connecticut Sun in the Women’s National Basketball Association.

Still celebrating her rise to the top of the chart as the best rebounder in the WNBA in a regular season, the Sun’s starting centre was named the Associated Press’ Most Improved Player of the Year.

The latest honour came from a 15-member media panel that votes for the weekly poll. The 23-year-old, six foot six Jones earned the recognition after she broke the single-season rebounding mark by becoming the first WNBA player to top 400 rebounds in a season.

Jones, the second Bahamian to play in the WNBA, surpassed the previous league mark of 398 by Tina Charles in her rookie season with Connecticut in 2010 with 8:50 left in the third quarter on Sunday when she pulled down her 399th rebound on a missed shot by Sparks forward Nneka Ogumike.

After finishing with 10 rebounds in the game, Jones wracked up a total of 403 for her career. “I just wanted to come into this game and get into my groove as early as possible when it came to rebounding,” said Jones of the historic accomplishment, which she added made her “feel really, really good.”

At the end of the game, she produced another double double with 10 rebounds and 20 points. “She’s a very special elite rebounder and she’s only scratched the surface,” said Sun’s head coach Curt Miller of his second-year player. “She will get better defensively and offensively. She will only get stronger around the basket.”

A lot of what Jones did helped in the panel’s decision to award Miller, who was also named the AP’s Coach of the Year yesterday. He received 14 of the 15 votes as he led the Sun to a fourth-place finish in the standings after the team lost Chiney Ogwumike to an injury before the season started. The Sun lost five of their first six games before winning 17 of the next 21.

“I’m humbled because there wasn’t a lot of expectations on this group,” Miller said. “Such a credit to those players, every adversity we had, they responded.”

Connecticut finished the regular season in fourth place with a 21-13 win-loss record. They were 10-6 in conference play with a 12-5 mark at home and 9-8 on the road. They were 6-4 in their4 last 10 games, but ended up losing their last two games, including the season ending 81-70 decision to the defending champions Los Angeles Sparks on Sunday.

By virtue of their position, the Suns were awarded a bye into the second round and will host a one-game match-up on Sunday, September 10 against the winner between the Seattle Storm and the Phoenix Mercury that will be contested tonight.

If the Suns are successful, they will advance to the best-of-three semifinals against the Sparks starting on Tuesday, September 12.

The winner of the series will advance to the best-of-five finals.

It was a tremendous break out year in the WNBA for Jones, who posted a career high of 29 points and 11 field goals against Indiana on July 1 and 22 rebounds and six assists against Washington on August 29.

Additionally, she produced five block shots twice, four steals as many times and five three-pointers in a game against New York on June 23, while playing a total of 37 minutes three times.

Jones also participated in her first All-Star game and in her starting role in the mid-season showdown on July 22 in Seattle. As a starter, she not only finished with 24 points, but she left the crowd in awe with her one-handed slam dunk on a breakaway in the 22 seconds as they lost 130-121 to the west.