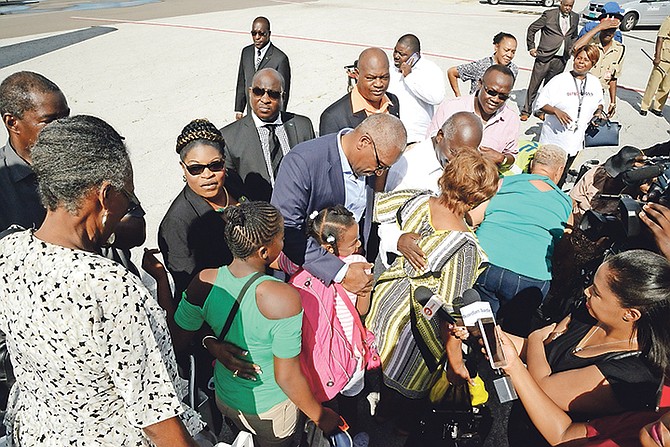 THE costs associated with the largest hurricane evacuation in the country’s history is “immaterial” when lives are to be preserved, Prime Minister Dr Hubert Minnis said yesterday as Hurricane Irma draws closer to the southern islands.

The prime minister, who was at the Lynden Pindling International Airport (LPIA) with Official Opposition Leader Philip “Brave” Davis and other government officials to greet the first group of evacuees from Inagua said, “You don’t put money on lives.”

He was asked to comment on the cost to taxpayers to evacuate residents from Mayaguana, Inagua, Crooked Island, Acklins, Long Cay and Ragged Island.

On Tuesday night, Dr Minnis called these evacuations the “largest” ever seen in this country.

“Money is immaterial when it comes to lives. You don’t put money on lives,” he said in response to a question from The Tribune.

National Emergency Management Agency (NEMA) officials said yesterday as many as 15 flights from the southern islands were expected.

This is something Dr Minnis applauded.

“What we’ve witnessed to today is history,” he told reporters at LPIA yesterday where he personally greeted evacuees from Inagua.

“We have a monster storm coming through The Bahamas from the southern areas. We’ve sent out a warning to our residents and as you can see they accepted and most would have volunteered to come out.

“We have organised various planes to evacuate individuals from the southern island, including Ragged Island.”

He added: “We have great assistance also from the leader of the opposition and I think all of our hiccups are cleared so I want to thank the opposition leader for offering his support also because this is not a political event. This is a national event.

“it shows the maturity as we move forward. Both political parties get together for one common purpose and that is to save lives and show the Bahamian people that we are one family and continue to work as a unified group.”

Mr Davis, who gave input into the evacuation process, agreed.

He said: “Certainly, there are things that are not to divide us. An impending national disaster, threats to our nation’s security, threats to our safety and health are not matters that you could approach along party lines.”

While the cooperation across party lines was commended, Mr Davis said he still had concerns.

“Well I am concerned that they have not heeded that warning. As I said it’s better to be safe rather than sorry. This hurricane is a monster.

“It is packing 185mph winds and Lord knows what devastation will accompany that.

“So if you are still not heeding please take advantage of the efforts now being engaged by the government to bring you to safety and please adhere to the warning and please accept the olive branch being handed to you to make sure that you are safe,” Mr Davis said.

Dr Minnis said because it was possible Mr Davis could be the next prime minister, succession planning and co-operation in times like this were needed.

Irma, according to weather officials has winds of 185mph, making it a solid category five storm.

Although many residents heeded the emergency evacuation, not everyone left those islands. However, officials could not say yesterday how many stayed behind.

Officials have said the southern islands will begin to feel Irma’s impact by this evening continuing into Friday.

The central and northern Bahamas will also likely experience effects of the storm as it churns through the country into the weekend.

Comrade PM Minnis is acting like a Rock Star....... surprised the man's not signing autographs for the Out islanders fleeing the from the path Hurricane Irma? "ACE" is slipping on the job?

PM deserves all props for this to be honest. Inagua probably got 175 mph winds. That's insane and I hope most people left.

i have no problem footing this bill.

better than wasting on carnival to keep some fat cats in style.

Lives and costs are important. That's why you plan ahead to make sure you're doing things cost effectively, negotiating vendor rates etc. however, since they were caught seat of pants again, I'd rather pay up then leave people in the path of the storm.

The greatest joy for me was seeing the photos in the newspaper with the kids coming from Inagua with their hair all neatly plait and their nice "going out" clothes. This is a much better picture than picking them up from flood ravaged homes with nothing but the clothes on their backs. Thank you Bahamas government.

This was a commendable activity. Thank you, Dr Minnis and Cabinet! For the first time, the southern islanders were first on the list. Those who chose to stay had their reasons and cannot blame an uncaring government. Money well spent!

F-I-N-A-L-L-Y we have Prime Minister with common sense!

Perry Christie and Hubert Ingraham could be brought in to give our Southern brothers and sisters dance lessons and provide entertainment because neither of them knows a damn thing about taking care of people...