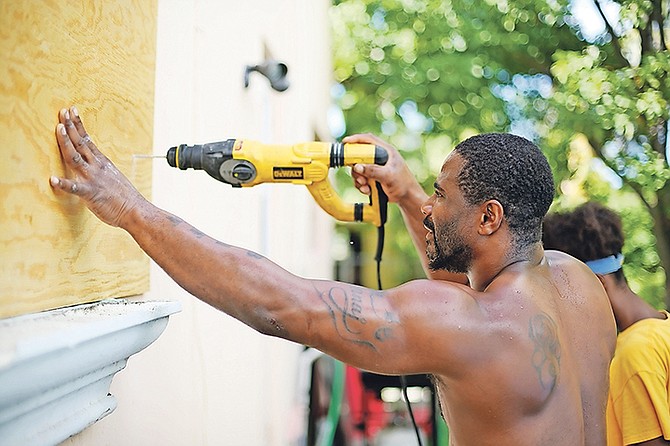 THE ENTIRE Bahamas was placed under a hurricane warning Thursday as Hurricane Irma hurled toward the southern islands with winds up to 175 miles per hour.

In an interview with The Tribune, US Accuweather forecaster Dan Kottlowski, said the centre of Irma would pass very close to the southern islands Thursday night and will take the "full impact" of Irma's wrath.

Irma is forecast to bring "life-threatening wind, storm surge, and rainfall hazards" to the Turks and Caicos and southeastern and central Bahamas today and tomorrow.

Irma's maximum sustained winds have decreased to 175 mph after being steady at 185 mph for nearly two days.

According to Kevin Nugent, meteorologist with US weather service Baron, Irma will continue moving west northwest Thursday night and would pass between Mayaguana and Inagua overnight Thursday. The storm's centre will pass over Acklins Friday morning, he said.

"There was a south and west shift in the track this afternoon from the European model and several other models as well," Mr Nugent said Thursday night. "The new path takes the centre of the hurricane northward through the entire Florida Peninsula. This slight shift in the track is good for parts of the Bahamas and especially Nassau/New Providence and points north and east of there."

On the forecast track, the core of Irma will move near the central Bahamas on Friday and continue over the northwest Bahamas Saturday and Sunday.

Extensive to severe flooding is expected as Irma is forecast to produce rainfall amounts of eight to 12 inches, according to officials from the Department of Meteorology.

The combination of dangerous storm surge and large destructive waves can also raise water levels by as much as 15 to 20 feet above the normal tide. Residents living near the coast are asked to move to higher ground inland.

Residents in the Inagua, Mayaguana, Crooked Island, Acklins and Ragged Island should remain indoors until the all clear has been given.

Residents in Long Island, Rum Cay, San Salvador, the Exumas and Cat Island should begin to feel the effects of Irma by Friday.

Residents in the northwest Bahamas, including New Providence, Eleuthera, Andros, the Berry Island, Bimini, Grand Bahama and Abaco will begin to feel the effects of Irma by Friday evening.

"The centre of this thing will pass very close to the southern islands early Friday and the eye wall is 30 miles wide and outside of that the tropical storm force winds extend up to 185 miles so the entire Bahamas will be impacted. It will be worse for the islands closest to the eye. The central Bahamas will have increased winds by Friday morning and the worst conditions will be late Friday into Saturday. Irma will show us her wrath on Saturday into Sunday.

"New Providence will begin to experience deteriorating conditions on Friday and things will get bad into Saturday morning and last through Sunday. Grand Bahama will experience tropical storm force winds and rain most of Sunday into Sunday night."

Mr Kottlowski urged Bahamians to take Irma "very seriously" because even a slight change could determine Irma's impact on The Bahamas.

"This is even stronger than Matthew," he said.

Last night, American-based Baron Weather meteorologist Kevin Nugent indicated there may be a chance New Providence may escape the worst of the storm.

"There was a south and west shift in the track this afternoon. The new path takes the centre of the hurricane northward through the entire Florida peninsula. This slight shift in the track is good for parts of the Bahamas and especially Nassau/New Providence and points north and east of there."

"Do not underplay it because it's further west than was originally predicted it will still cause major damage to a lot of places. Hope for the best but prepare. There is nothing wrong with over preparing."


On Wednesday, the fierce storm hit the Caribbean islands with 185 mph winds, moving through Barbuda and St Martin. The New York Times reports widespread damage to property, homes, and infrastructure on these and other islands. Gaston Browne, the prime minister of Antigua and Barbuda, told reporters Barbuda "is totally destroyed -- 90 per cent at least." Reports indicate at least 10 have died in the Caribbean.

Wednesday night the storm passed just north of Puerto Rico, and knocked out power to around 1 million people on the island.

Meanwhile, Jose has strengthened into a category two hurricane in the Atlantic Ocean and may become a concern for portions of the Leeward Islands this weekend.

Jose is currently located more than 650 miles east of the Lesser Antilles and is moving west-northwest at 15 to 20 mph.

Jose is expected to continue to gain strength over the next day or two and will likely attain major hurricane status (with winds of 111 mph or greater) on Friday.

By this weekend, Jose is then expected to slow down and turn northwest. However, how close Jose comes to the northern Leeward Islands before making that turn remains uncertain.