Arthur, The Boy Living In The Paediatric Ward 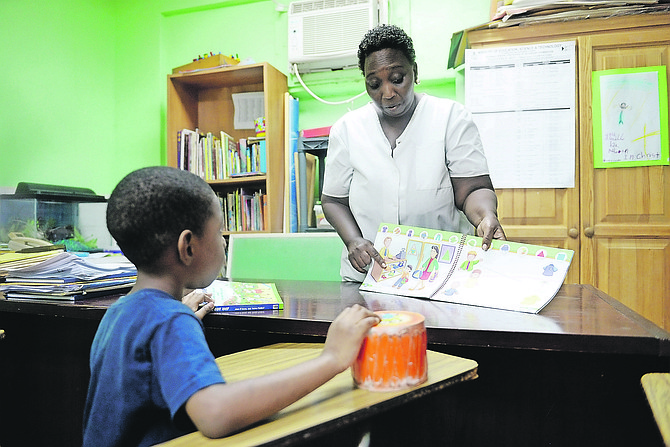 FOR five-year-old Arthur, a perfect day consists of touring the hospital with his favourite nurse, eating lots of pizza and watching Barney shows.

Although his circumstances are far from typical, the precocious charmer is full of energy on Thursday afternoon, and eager to show The Tribune the tiny corner of the Paediatric Ward at Princess Margaret Hospital (PMH) he calls home.

“Arthur is just infectious, he really is,” said a ward nurse, “he is a sweetheart.”

“Once he gets started, he steals the show. There is never a dull moment with him,” she continued.

“He has so much energy, he’s always breaking toys or getting into mischief but he’s so lovable. When we do rounds sometimes he’ll come, or he’ll go by the gift shop. We went to the park yesterday.”

The Tribune has changed Arthur’s name to protect his identity.

“Are you my daddy?” he coyly asks Tribune photographer Shawn Hanna during this newspaper’s visit to the hospital. His tone and cheeky grin elicited nervous chuckles from all within earshot; however, his eyes betrayed a glimmer of wisdom and gave an inkling of perspective into how the rambunctious little boy braved his circumstances.

His question was a sorely needed icebreaker to a considerably bleak narrative.

Arthur is one of four child boarders currently being housed at PMH, a phenomenon that highlights shortfalls in the country’s ability to meet social demands. Two of them, infant girls, are in the Neonatal Ward.

Although he is not sick, he has lived on the ward for two years watching sick kids and their visiting families come and go. His case is one of dozens of children that have called the institution home due to their complex medical histories, some unable to leave until they are teenagers and others as adults.

He spends the majority of his time inside the hospital, and in the ward; however, sometimes he is treated to an outing, like a visit to the park last week after he got a vaccination.

Arthur’s “room” consists of a standard hospital crib; however his space is at the rear of the ward with a few more feet of perimeter space than the other seven cribs.

He has two small mobile dressers for his toys, books and clothes.

Last month for his birthday, he had a clown and Big Bird entertainer, with his favourite pepperoni pizza and cupcakes.

A cost analysis undertaken by the hospital estimated that having two boarders in the Paediatric Ward cost the institution $1,108 per day.

However, nursing staff at the Princess Margaret Hospital told The Tribune the emotional toll of caring for child boarders far exceeds the soaring costs shouldered by the facility.

Eleven-year-old Jacob’s condition, another child boarder whose name has been changed, offers a stark contrast to Arthur’s effervescent personality.

Jacob came to the hospital in 2014 as a victim of abuse, and is a candidate for the Robert Smith Ward at Sandilands Rehabilitation Centre (SRC). He is nonverbal with severe developmental delays, suffers from seizures, and his current medication makes him shake constantly.

“Some nurses, they just get attached,” said Nursing Officer Eulogia Brown, as she spoke to caring for Jacob.

“He has (become more sociable), but before he was very withdrawn. When he came, he said nothing and he’s just started verbalising a bit trying to say ‘mama,’ and when he gets excited he’ll go ‘wooo, wooo.’ It’s a real improvement because when he first came he was just there, he didn’t try to move or say anything.”

But not all boarders arrive as sick three-year-olds, like Arthur, or abused eight-year-olds like Jacob; for some, the hospital is their first home.

“It really is heart wrenching,” said senior nurse Judy Johnson, “because we really get attached to them. Some of them come to us as newborns with their naval cord just cut, so we name them, we see that they’re christened, we buy clothes for them, even though the hospital does it, we also do our personal spending.”

Nurse Johnson continued: “So when they have to go, especially to a (children’s) home and not to a family, it really breaks our hearts. I just get tired of doing this, one baby just went to a home and we can’t even visit them to continue with that bonding even though they don’t know anyone else but us.”

Nurse Johnson has worked at the hospital, particularly its Neonatal Ward, for 15 years. Wiping tears from her face as she tended to a three-month-old boarder, she told The Tribune it never gets easier with some goodbyes harder than others.

“Angel, we named her,” Nurse Johnson said, remembering a child who has since left the hospital.

“I’ll never forget the day she came, that was the coldest February in 2014 or 2015. It was so cold, a Tuesday, and the policemen brought her in. The mom delivered her on the step and she came in with her naval cord and the elastic band on it.”

She continued: “When they leave you don’t even know what home they gone to, how they’re doing, nothing. They say we have to get permission to visit, but so far, we haven’t been successful. Sometimes I wonder if they remember us.”

Nurse Johnson told The Tribune that there were twin boarders at one point, who were admitted into a home but separated by adoption.

“One of them is a manager at Atlantis now, he remembers us because they were big when they left but he said he doesn’t know where his brother is, they got separated in the home.

We have enough millionaires in this country crap like this should never happen.

It doesn't take a millionaire to care for a child...we all can play a part.