Man Shot Dead In Front Of His Daughters 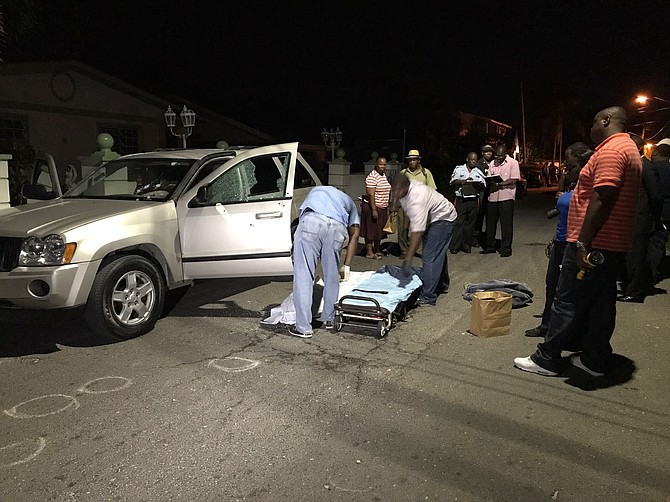 The scene of the shooting on Tuesday night.

A 24-year-old father of two is dead after being shot multiple times in front of his daughters while parked in a vehicle outside a residence Tuesday night.

The killing took place shortly after 11pm and took the country's murder count to 103 for the year, according to The Tribune's records.

The shooting came three days after a 17-year-old teen was shot multiple times and killed while walking through Johnson Road and a week after an 11th grade Government High School student was killed while hanging out with persons in the back of his home. Those two killings both occurred in Fox Hill.

According to police, shortly after 11pm officers received information that a man was shot off Farrington Road.

When officers arrived on the scene off Christopher Street, they discovered the lifeless body of a man in a vehicle who had been shot multiple times. He was pronounced dead at the scene.

The Tribune understands the victim’s four-year-old and one-year-old daughters were in the vehicle at the time of the shooting, but were not harmed during the incident.

Police are on the hunt for the occupants of a white Nissan Note they believe are responsible for the murder.

Police have not identified the victim, but a source told The Tribune he is Shannondoah Greene.

Anyone with information on this murder is asked to contact police at 911 or 919, the Central Detective Unit at 502-9991 or Crime Stoppers anonymously at 328-TIPS.