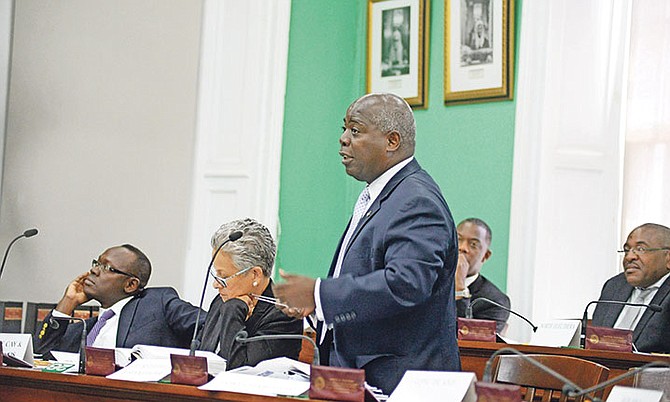 OPPOSITION Leader Phillip "Brave" Davis yesterday accused the government of "meddling" in the senior leadership of the Royal Bahamas Police Force and "subverting the Constitution" that protects and empowers the commissioner of police to carry out his duties.

In a statement, Mr Davis condemned the Free National Movement for allegedly "pressuring" and "forcing" senior officials to "abdicate their responsibilities" over the interest of the Bahamian people. He said the command of the RBPF should not be subjected to "unexplained and improper political interference".

It has been highly speculated that Commissioner of Police Ellison Greenslade is being forced out as the RBPF's top chief and has been asked to retire early. Sources say there is "noticeable tension" between National Security Minister Marvin Dames and Commissioner Greenslade.

The Tribune understands that Commissioner Greenslade has been offered the post of high commissioner to London and is set to be replaced by Deputy Commissioner Anthony Ferguson.

It was also reported that Deputy Commissioner Emerick Seymour, now in charge of Freeport, will be transferred to Nassau as deputy commissioner.

When asked, Mr Dames insisted there was no reason for concern, adding that Commissioner Greenslade continues to operate in the post of top cop on a day-to-day basis.

In his statement on Wednesday, Mr Davis said the government's perceived interference in the RBPF has resulted in the perception of a leaderless organisation.

"We remain gravely concerned about the apparent meddling by the government in the senior leadership of the Royal Bahamas Police Force that has resulted in the perception of a leaderless organisation. Our country must draw a line to protect the individuals who served our country with a sense of duty, honesty, integrity, and courage," Mr Davis said.

"The command of the Royal Bahamas Police Force should not be subjected to an unexplained and improper political interference. The government should not set the precedent of subverting the Constitution that protects and empowers the commissioner of police to carry out his or her duties effectively. The Progressive Liberal Party strongly condemns any effort of political pressure to force any senior official to abdicate their responsibilities for a political reward over the interest of the Bahamian people. If the opposition confirms that there was an attempt to circumvent the tenure of the commissioner of police by an overreaching politician with a blatant disregard for the constitution, it will be strongly condemned."

"Our country continues to be embroiled in a vexing crime problem. The alarming spikes in armed robberies and murder necessitate us abandoning a partisan mentality and collectively holding hands to protect our neighbourhoods from being safe havens for criminals," the statement said.

"There has been a systemic failure, and the system must respond with policies and initiatives to prevent and not just respond. During the Christie administration, we strengthened the Urban Renewal programme to readdress our country's development challenges among young people. The government must place a sustained effort on socio-economic policies designed at addressing the causes of crime and strengthen the relationship between the police and the communities to improve intelligence gathering.

"Our communities, our citizens, our schools, our children, and particularly our young men cannot wait for a partisan debate over crime to end. They deserve their policymakers to act now to protect their interest and rights to a peaceful and a safe environment."

Up to press time, 103 murders were recorded this year. Mr Dames said on Wednesday 45 of those killings happened since the May 10 general election.

Been Meddled with since Day one. In a major way since July 10, 1973. Mute point. You own it as much as any other political personality.

the failed english king started this behavior ba ck in the 40's with the Oakes murder investigation. Too many of our elected state officials have been self-serving and corrupt, the previous PLP government turned corruption into an art form. We elect people with little or no integrity because most of we the voters do not have integrity or even know what it means. D Minus population does not elect a A plus government. Meanwhile we can hope and pray that as many corrupt cabinet ministers are brought before the courts and if found guilty are jailed and also forced to pay restitution.

How this idiot can find the nerve to mention "political interference in the police force" after hog tieing, muzzling and preventing Greenslade from seeking prosecution for blatant malfeasance, alleged corruption, fraud, and outright robbery during his tenure is unfathomable.

With more people charged before the courts in 4 months than 50 years for corruption, Phillip "Brave" Davis himself should be investigated for "Meddling With Police Force"!

This short pudgy imbecile with his short stubby grubby dirty yellow sticky fingers has somehow managed to forget that he was a senior member of the most corrupt cabinet in the history of our country. Davis played an instrumental role in suppressing law enforcement while he and his fellow cabinet members under the corrupt Christie-led PLP government were lining their pockets and the pockets of their family members, business cronies and political friends.

If meddling is encouraging officers to do their jobs and give them the tools to do it ... THEN MEDDLE AWAY!!! it's better then Brave trying to curtail the police efforts (WTF did the think BJ Nottage was going to do??) which has always been his kickback to his down south drug boys that fund his election campaign every 4 years....

Not only that, he also made sure that the boys that held him and his wife up were able to walk. Wonder why he ain talkin dat!!