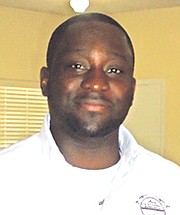 GRAND Bahama's Alexander Burrows Jr is running as a candidate for the position of northern region area vice president of the Bahamas Public Services Union in its upcoming election.

Mr Burrows, a customs officer who is aligned with Team Restoration, said the union is "haemorrhaging", and has lost about half of the 6,000 members under two presidents.

BPSU members will go the polls on Thursday, September 28.

"The BPSU is need of rescuing," said Mr Burrows. "This election is most critical in our union's history."

He said over the past three years there had not been one single audit, and union membership had declined from 6,000 to just under 3,000 today.

"We are haemorrhaging by the minute - persons are leaving this union…because we don't have a plan to keep our members," said the concerned candidate.

Mr Burrows indicated that under the presidency of John Pinder, there was an exodus of the Customs and Immigration Departments in 2010. And before him, the union lost members of the National Insurance Board and nurses under former president William McDonald.

"And so, it is safe to say that the BPSU is the fastest dying union in the Commonwealth of The Bahamas," he stressed.

Mr Burrows said Team Restoration is about bringing "transformative and transformational" leadership that will not only increase membership but also provide improved benefits for its members.

"I am running for area vice president of the northern region which comprises Grand Bahama, Abaco, and Bimini. It is not my first time running; I ran three years ago.

"I am running because I cannot sit idly by and watch our union deteriorate into non-existence. We lost four crafts under two presidents," he said.

Team Restoration, he said, plans to enter negotiations with the Grand Bahama Port Authority to build low-income houses for union members, and will seek to correct anomalies in salaries, negotiate wage increase according to the cost of living index, implement a competitive contributory supplementary pension plan, and bring about more benefits.

The customs officer decided to remain with the BPSU, even though many of his colleagues in the Customs Department left the union, and established its union with the Immigration Department.


"I never left because I believe in the pure form of what trade unionism ought to be. I am the son of a unionist; my father was a devout trade unionist, and I watched him at as an adolescent, and he always had the heart for the people."

Other members of Team Restoration are Dwaine Stevens, an IT supervisor at the Registrar General's Department who is running for president; Byron Musgrove of judiciary is running for the position of executive vice-president; Nicole B Oliver, of the Department of Agriculture, is the candidate running for vice president while Anita Fitzgerald, of the Gaming Board is running for secretary general.

Devon Moss, of the Department of Lands and Surveys, is running for asst secretary-general; Roselyn Miller is running for treasurer while Emerson Adderley of Princess Margaret Hospital, Kemuel Knowles and Curtis Hanna are running for BPSU trustee.