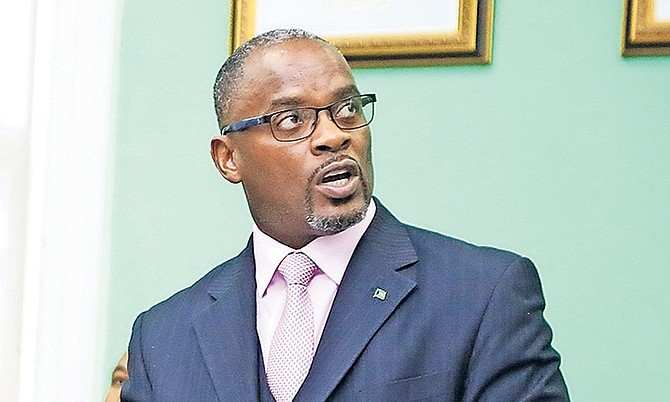 DESPITE heavy politicisation and "emotional outbursts," Central Grand Bahama MP Iram Lewis yesterday said he is satisfied with the current level of engagement over the $5.5bn Oban Energies oil refinery and storage facility.

Mr Lewis stressed the government would be monitoring the project and would "do the right thing" if it was discovered there was a threat of disrupting Grand Bahama's natural ecosystem.

He urged Bahamians to "give the developers a chance" as he responded to reporters on the sidelines of the Bahamas Contractor's Association monthly luncheon.

Meanwhile, an online petition for the cancellation of the project has nearly achieved its target of 1,500 signatures after just a month.

The change.org petition "Stop the Oban Energies Refinery project: It will destroy the Beautiful Bahamas" was created by user Kishon Turner and had over 1,450 signatures up to press time.

"So far yeah (I'm satisfied)," Mr Lewis said, "there has been a lot of emotional outburst, it has been politicised to an extent, a bit over the top. I'm patient, watching it unfold.

"We tend to draw back a bit, correct those missteps and move forward. At the end of the day I want the Bahamian people to be reassured that it is being done in their best interest and if we see any danger that is gonna disrupt the Grand Bahama natural ecosystem, if it's not going to be properly contained, properly managed, my government is responsible and we will do the right thing.

"But we have to give it a chance and give the developers a chance in light of the fact we've already signed the heads of agreement to produce what we asked them to produce, and if they don't do it to our satisfaction then we have recourse."

The project has been fraught with backlash, with concerns over its handling from its botched ceremonial signing to controversial clauses in its heads of agreement.

The Official Opposition has repeatedly accused the Minnis administration of deceiving Bahamians over the deal, and calling for the agreement to be cancelled.

However, Prime Minister Dr Hubert Minnis has maintained he told the truth, adding that the only element he did not reveal was that the heads of agreement signing for the project at his office was ceremonial.

The revelation that the deal also involved 690 acres of Crown land, which would be leased from the government to build Oban's refinery, has also brought increased scrutiny. This element of the deal was revealed by Satpal Dhunna, Oban's president, to the media two weeks ago.

Attorney Wayne Munroe, QC, this week told The Tribune a clause in the Oban Energies Heads of Agreement frees the developer from any obligation to build the $5.5 billion-dollar oil refinery and storage plant.

However government officials have countered his interpretation, insisting the agreement is a contract to lease Crown land only to construct the terminal and refinery.

At a town hall meeting in Grand Bahama last month, residents appeared split over the project with some expressing concern about the environmental impact of the $5.5 billion project and bitterness that consultation was not engaged with them before the agreement was signed.

Yesterday, Mr Lewis said: "It was a very good very lively crowd who would have gotten firsthand information, not all the details but I guess as the process go on more information will be revealed. I encourage persons to do their own research; the heads of agreement has been tabled, ask the hard questions so that you can get the necessary answers.

"There will be full disclosure," Mr Lewis continued.

"At the end of the day I will not panic until I see it comes to the point where hard questions are asked, with respect to potential environmental disasters, and they're not answered. So I'm hopeful that more positive will be realised from this, all of the necessary groundwork will be done.

Lewis appears to know more than doc, Lewis has not read the contract. The Government has to wait for OBAN to fix the environmental problems. How long the Waite?? who knows.

Good old Lewis was not at the town meeting in Grand Bahama it is said, If Lewis cared would he not have been there?? he can only fool the peoples time voters in GB. Like those Pinders point voters. who continue to cry for relief.

"#Yesterday, Mr Lewis said: "It was a very good very lively crowd who would have gotten firsthand information, not all the details but I guess as the process go on more information will be revealed. I encourage persons to do their own research; the heads of agreement has been tabled, ask the hard questions so that you can get the necessary answers."

Disingenuous. We expect better from a transparent government. It was a hastily put together townhall with little notice to which NOT A SINGLE GOVERNMENT OFFICIAL SHOWED UP. As such, there was ZERO ENGAGEMENT because there was no one to engage.