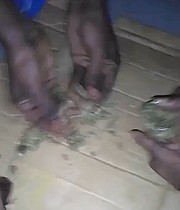 (STRONG LANGUAGE) One of the videos showing the hands of the men breaking down what appears to be a package of marijuana.

NATIONAL Security Minister Marvin Dames yesterday expressed disgust over viral video recordings purported to have been taken of inmates at the Bahamas Department of Corrections.

While officials have not completed investigations into the authenticity of the videos, Mr Dames said the clips posted to social media were unsurprising given longstanding challenges of corruption within law enforcement agencies.

He stressed these incidents were the result of the greed of a small minority, which would be flushed out of the system as the government works to radically transform standards for recruitment, training, development and succession planning.

“It disgusts me,” he told The Tribune, “because I know the vast majority of correctional officers and law enforcement officers are hardworking, this angers them. The vast majority are totally against this kind of nonsense and its stuff like this that disgusts me. They don’t care for this or the persons responsible, but we will seek them out, expose them, and clean out these agencies one incident at a time.”

Four videos were shared on Facebook, one of which shows only the hands of the men breaking down what appears to be a package of marijuana. Another video shows two men making hand gestures and making profane statements, while another depicts four men in a smoky cell with a portable speaker.

Mr Dames said: “I’m not surprised, from the time I was serving in the force this was one of the challenges we faced. That’s the challenges of corruption within our law enforcement agencies. While we continue to say the vast majority of our officers are decent, hardworking individuals unfortunately there is still a small element, as small as it may be, but it exists and these are the challenges we face.

“I can tell you the times we had to go into the prison and execute raids on these cells and find everything from blunt instruments to drugs to cell phones. We know that these things exist and unfortunately they’re making their way into prisons with the assistance of prison staff who have no respect for the oath that they would have taken, and no respect for the vast majority of their colleagues who come to work on a daily basis and work hard to keep us all safe.”

“This is especially sad, and an unfortunate situation we sometime find ourselves,” he continued.

He added: “This is why we have to focus on recruitment, the way we recruit our officers. We’re going through psychological testing, all of the individuals a part of this upcoming prison officers entry, are tested. And we’re doing a battery of other testing to ensure we get the best out there.”

It is called a lack of responsibility Mr. Dames. If all of the prison are held responsible and collectively punished monetarily making the "good apples" suffer for the bad then they will bring that kind of crap to a stop themselves because it affects their wallets and after this happens a few times then trust me, it will stop !

You need two new prisons. One an educational facility for low risk and the other medium maximum security campus. I'd suggest you build one before considering a new parliament building.

Ma Comrades, talk coming out over high walls Fox Hill Prison has it that under this prison minister, the inmates on the inside walls are being fed so poorly, the families over on other side walls have been forced into starting a food bank fill the close to starving rationing disgusting food gap. It's bad enough to jail people who are still waiting for their day in court and then to near starve them has be bordering on da travesty of the highest red shirts ministerial order.

Bahamian starvation is only getting two piece chicken and a small fry for dinner. Can't survive on that lil bit!

First of all Mr. Dames should have confirmed that the videos were authentic and from the Fox Hill Department of Corrections before offering comment. A set of hande breaking down apparent marijuana can have been photoshopped or videotaped anywhere. Secondly, any given prison anywhere around the world will not be filled with choir boys, but persons who have run afoul of the law and persons, in most cases, still want to enjoy the pleasures of being free. And so there have to be checks and balances in place to ensure rules are enforced and order is kept. Unfortunately the human element is the weakest link in any controlled environment as human nature tends to break down where there is constant interaction between individuals and then discipline must be enforced both on the inmates and officers. But from the nationality’s mix of the individuals and the laxity on the video with the blaring music and all, this appears more like a detention center than a prison and the minister should confirm before further comment.

I that was my first thought. . .seem logical!

In order to hold a position as an officer whether it be correctional, police, defense or immigration one must first have integrity with that being said seek the best not the worst.Reward the best passover the worst!!!

And on s more lucrative note, they have The Bahamas listed as a narcotic state and a money laundering haven. Cocaine is an annual $1.8 Trillion Dollar illegal industry. Yes Trillion with a ‘T’. That is ten percent of GDP of The United StTes, 18% of China and around 30 percent of the GDP of Canada. With a GDP of 9 .5 Billion, the value of the gross domestic product of the Bahamas can only supply the world with cocaine for just a few days out the year. In other words, the amount of cocaine sold around the world each year is about 2,000 times all the goods and services produced in The Bahamas in a year. The majority of cocaine is produced in Peru and Eighty percent of cocaine produced worldwide is consumed in The United States. Is is now shipped mostly through California and Texas and the majority is consumed in New York. So if The Bahamas is still a major drug trafficking country how come there are no major drug busts (multi million) for years on end?. And if The Bahamas is involved in major money laundering activities how is it more persons are not being exposed with b over bulging bank accounts that they cannot give accounting for? Why aren’t the proceeds of these money laundering accounts being seized and being used to pay down the national debt? Why aren’t California, Texas, New York and Florida on the list of drug trafficking and money laundering states? The $1 Billion that passes through the web shops in the Bahamas is not even sufficient to be gratuity on the $2.5 Trillion (yes with a ‘T’) illicit global, illegal drug trade. And that does not include multiple Billion prescription drug trade, that includes opioids which iare now the greatest killers among misused or abused drugs.

so they lock up the lil' street dealers and put them on the font page to make their claim look legit and the public buy into it. Show us the money.

Have the videos been confirmed as shot from inside HM Prison, Fox Hill????

Dames claims he made raids at the prison numerous times as a police officer. So he should be able to say if at least one of the videos was actually Fox Hill Prison.

In the Netherlands the jail population is being reduced by 50 percent while crime is down by 39%. Unlike the US, the Dutch do not believe in long prison sentences but for us more on reform and rehabilitation . The average prison is 3 months compared to 5 years in the US and the rate of recidivism is low. There are only 39 prisoners serving life sentences. The US has 5 percent of the worlds population but holds 50 percent of the worlds’ prisoners.

Since majority we Comrades are of the non-whites skin colours - I goin suppose blacks have remained in support of the retention carrying out the harsh colonials penal punishment. Even the new black PM Minnis, vowed to arrest and lockup in Fox Hill Prison, all current and former MP's and senators remaining delinquent in their financial disclosure filings... and what was the date the PM had set before being jailed? Would've thought with the passag majority rule and independence time now into our fourth black native PM, one them man's would've cast aside the Englishman's penal system - but oh no, they keeps right on to this very day imprisoning lots blacks... maybe its so they can film them to beat their red political drums in an attempt change the negative perception their own fellow blocks holds them.

Oh!,yes. This type of incidents are actually,really disgusted but also the lack of commitment with decency,dignity & respect from formel and current administration which took a quick U-turn in tackling corruption and establish higher levels of transparency in handling the Public Pulse as well as complying with the Public Information Act, Public Disclosure Act and also invalidation of such compromise "cabinet pledge" where a cabinet member are not allowed to expose the wrongdoing by another colleagues cabinet member.

This activity seems to have been going on for years as the former policeman now turned Minister knows. And in all fairness...... instead of 'disgust' the Minister should be thankful and appreciative for the great risk and courage it took for the alleged perpetrators to be making and showing this video. Obviously investigations are immediately warranted and if true the officers paid to do their job must be fined and pay back the taxpayers money for not doing their job and dishonourably discharged....... instead of what seems to happen in other areas of govt where they get paid for being fired for not doing their job, notice in lieu and 2 weeks or month for every year service when actually fired for not doing the job....and if this is the law it needs to change