Face To Face: A Miami Icon Born On Shirley Street

He’s been on this planet for 99 years, has all his faculties and is quite funny, witty and charming. He can hold a conversation with anyone and is so well-read he probably knows quite a bit about the subjects that intrigue most people. It’s amazing - the level of energy that exudes Garth C. Reeves Sr. It seems Father Time and the fountain of youth both blessed him, and he relishes in every moment that he’s alive.

Garth Reeves is a name well-known in Miami where he is considered by many as “the voice of the African American community”. A few months ago, he was recognised with a street co-designation ceremony in Miami on Northwest Sixth Street between Second and Third Avenues near the Black Archives Historic Lyric Theatre and the Black Archives History & Research Foundation of South Florida. 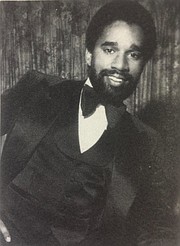 A young Garth as editor of the Miami Times.

He may be best known as publisher of the Miami Times, a staple in the diet of the local community, especially the African American community, with a circulation of about 10,000. Aside from serving the US Army in World War II from 1942 to 1946, the newspaper is the only place Garth has ever worked, beginning as a teenager in the print department.

“I went to work with my dad when I was 12-years-old, attending Booker T. Washington school,” Garth said.

“I was the printing devil (his job title). I learned the trade from my father; he taught me and I think he did a good job. I admired him very much - he and my mother were two of the greatest people on earth, I think.”

“Back then,” he recalls, “we used to lay out the paper one character at a time. It was like pulling teeth compared with what they do today. They just dictate to the computer and it can type out their words.”

His father, Henry E.B.S. Reeves was well known in the media world in The Bahamas back then - he was what would be considered today as the layout editor for the Nassau Guardian. Garth shared that his father spoke highly of the paper’s editor, Miriam Mosley “who was meticulous” and that his father “took great pride in that job”.

During the years of the great depression, Henry left Nassau to seek out a better life, specifically a better education for his children. Garth was born on Shirley Street in his parents’ house on February 12, 1919. He is the only boy from his parents’ union, which produced four girls. Henry was in America making way for his wife, Rachel Jane (nee Cooper) and his children to come over when Garth was born. When their only boy was four-months-old the family moved to Florida.

His father had a vision to stay in the media field, which he had a passion for. Henry approached his friends from Nassau, M. C. Bodie and S. A. Samson, an Anglican Minister, who believed in his idea for a newspaper in Miami and invested with him. When the paper started in 1923, it was called the Miami Sun.

“He went to New York to purchase printing equipment to start the newspaper and back then, it was only four pages,” Garth said.

“Even through the depression with paper shortages, even through hurricanes, my daddy was intent on keeping it going and he got that paper out every week. He had a struggle, but he stuck with it. During the time of the 1980 Miami riots, circulation was up as high as 30,000. Today, we are in our 84th year and we have never missed a single issue.”

When Garth graduated from Booker T. Washington high school, he attended Florida A&M University where he obtained a Bachelor of Science Degree.

“I wanted to study journalism and be a writer, but they didn’t have a journalism department at the time,” he said.

He studied English and mechanical arts because he wanted to ensure he could develop his father’s paper. He recalls the head of the English department at Florida A&M, J.A. Langhorne took him under his wing and left a positive impact on his life, encouraging him in his talents and ability to run the newspaper for his father one day.

Garth would only work in the printing department of the newspaper for one year before the US Government rallied the troops for World War II: “I had a mind to go to Canada and escape being drafted in the Army, but my mother talked me out of it. She didn’t want me to be perceived as a coward although she didn’t want me to get hurt. I went for training at Fort Benning in Georgia. I remember looking across the street and seeing all the paratroopers. They did not allow blacks to become paratroopers at the time. Any kind of restriction always sat bad with me.

“We then went to England to fight. We went over on the Queen Elisabeth, the biggest troop ship. We went through Scotland because they were sinking our ships so fast we couldn’t risk trying to land a troop ship in London’s port. It took us six days to get from New York City to Scotland. We distributed a lot of ammunition. Initially I was in the engineering department but later on I moved over to the infantry. When the war ended in Europe, it was still going on in Japan. We dropped that bomb on Hiroshima and the Japanese gave up. I spent 46 months altogether in the Army stateside and overseas. I don’t think anyone was happier than I was that the war was over.”

He recalls being “very happy to be back home” because his father was getting older and needed some help.

“My father wasn’t in the best health when I returned from the army and I took over to a great extent; he became publisher and I became publisher emeritus and we had a great combination between us,” he said.

Garth’s return allowed his father to have more time off to go deep sea fishing, a hobby he loved but could not find time for during the years Garth was off at college and then the army. Henry Reeves died in 1980 at the age of 88, his mother Rachel having died ten years earlier. Rachel came from a rich Bahamian legacy as the daughter of the great Father Marshall Mitchell James Cooper, the second black Anglican priest in the Diocese of The Bahamas, Turks & Caicos.

Garth has now created a great legacy of his own, and is lauded in the community as a human and civil rights activist - a natural development of serving as editor of the newspaper.

“The Miami Times has been the strongest word in town for the African American community,” he said proudly.

“People want to know what’s going on and get the news straight from the source. They look to the Miami Times to tell it like it is and that’s what we try to do. We try to give people the right news, the right angle, and the right consideration when things come up for change. I think we have done a good job and we have been rewarded for our work in the community.”

Garth fought on the front line for an end to segregation in the schools in Miami. In the 1940s and 50s when blacks could only play golf on Mondays, he stood up with others and fought in the Supreme Courts with Thurgood Marshall representing them.

They won, and the case resulted in equality on the golf courses, first in South Florida and throughout America. He also helped to push for an end of discrimination on the beaches - one time ago, blacks were forced to go to Virginia KeyBeach, the “coloured beach”.

He was married three times over the years, surviving all of his wives who died of natural causes. His eldest child, a son, died in his 30s, but Bob Thompson, veteran photographer and ZNS employee considers himself the adopted son of his great cousin. Garth’s daughter, Rachel, 78, often runs the paper and plans to return after her recovery from a brief illness.

Meantime, his 27-year-old grandson, Garth Reeves Jr. has been handed the baton and “is doing a splendid job” in running the paper today. 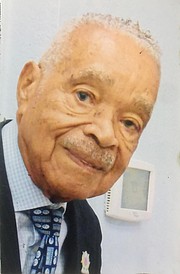 “I have been retired about 20 years now, but I always kept my hand in it (the newspaper) to a certain extent,” says Garth, who holds four honorary doctorates for his work.

“I started there officially when I was 12 and I stayed until my 99th birthday - I think it’s time to go now, I think I overstayed,” he said with a chuckle.

The Bahamas has never left his heart, though. His mother brought him back home as an adolescent and he fell in love, and returned almost every year for many years. He has land holdings in The Bahamas, but would’t retire here because he prefers to be closer to the medical facilities in South Florida.

“God has been good to me for 99 years. I used to say when I go I would be kicking and screaming asking for another year.

“I don’t feel that way now. I feel I may be imposing if I ask my maker for another year, but don’t give up on me yet; I think I may have one more to go! I want to walk this last mile, put my hand in his hand and let him show me the way - and be thankful for what he has done for me.

He has given me a very good life and I must be satisfied with whatever it is from here.

He gives this advice to the younger generation, swamped in a world of technology: “This is a great age we are living in, but I wish people would go back to reading and stop depending on the television. There is nothing like the written word.”

He refers to one of his favourite quotes; it comes from Edward Fitzgerald: “The moving finger writes; and having writ, moves on: nor all your piety nor wit shall lure it back to cancel half a line, nor all your tears wash out a word of it.”