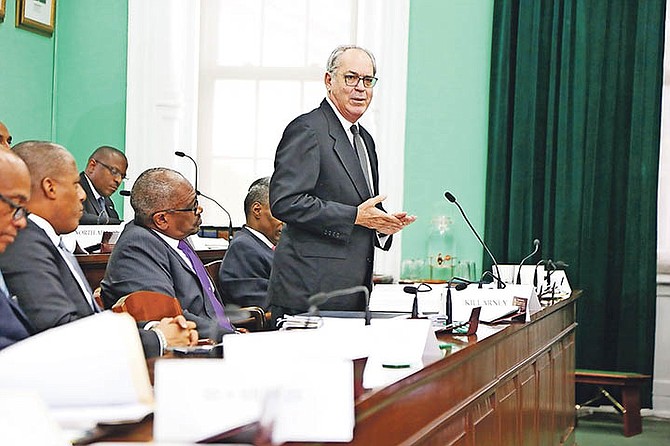 IF THE Bahamas is successful in being removed from the European Union's 'blacklist,' the government will have until December to make changes in the financial services sector to steer clear of being yet again deemed a non-compliant jurisdiction, a senior Cabinet minister said yesterday.

"The government has made representations to the EU about the pathway forward between now and December 2018, which will result in certain consultations and potential amendments, certain reporting requirements and other issues with regard to the financial services industry and we're looking at that now," Immigration and Financial Services Minister Brent Symonette said yesterday ahead of a Cabinet meeting, when he was asked by The Tribune what the country needed to do moving forward.

The Bahamas could be removed from the blacklist as early as tomorrow, Finance Minister K Peter Turnquest told The Tribune on Monday.

The minister told Tribune Business the government was "following up" with EU officials on the 28-nation's 'Code of Conduct Group' to determine whether the Bahamas removal will happen on April 12.

He revealed that the government at least hoped to "satisfy" the demands of the EU's technocrats at Thursday's meeting, an achievement that would mean the Bahamas' delisting was a relative "formality" when the bloc's finance ministers meet on May 25.

"That is our hope," Mr Turnquest said on Monday of the April 12 meeting. "They (EU officials) had indicated when we were over there they would have a meeting on the Friday following our meeting, and they were hoping to put our issue on the agenda.

"We did not make it, and the next available opportunity is April 12. We're following up on that, and hoping to get some success there. If not, we'll be moving on to the full EU council agenda on May 25.

"We're hoping we'll be dealt with on April 12. If not in full, at least the technical committee are satisfied, and we move on to the full ECOFIN (finance ministers) on May 25, which will then hopefully be a formality in terms of a review."

The EU formally blacklisted the Bahamas on March 13, having leaked its intentions the previous week, for allegedly being non-cooperative in the fight against large-scale tax avoidance by multinational companies.

The 28-nation bloc complained that it did not receive the "high level political commitment" it had been seeking from the Bahamas to address its concerns, which largely related to "ring fencing" and the absence of "economic substance" requirements for corporate vehicles operating in this jurisdiction.

Mr Turnquest subsequently said letters he had personally signed committing the Bahamas to compliance with the EU's anti-tax avoidance drive were "obviously not taken into account" in the 'blacklisting' decision.

He suggested that miscommunication, and related misunderstandings, had contributed to the Bahamas' blacklisting, not least that its commitment letter to the EU was signed by a senior civil servant in the shape of acting financial secretary, Marlon Johnson, as opposed to a Cabinet minister.