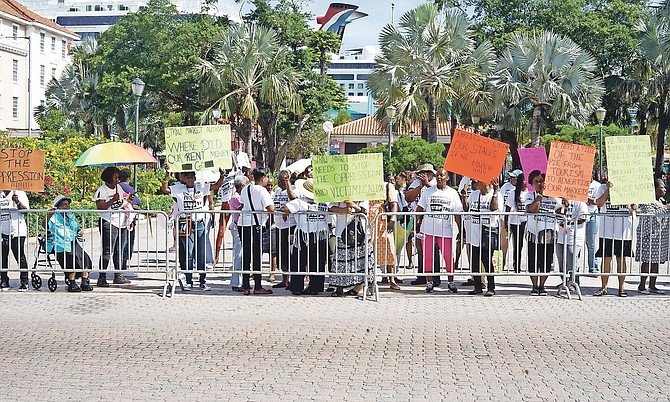 Dozens of Straw Market vendors demonstrated in Rawson Square yesterday, incensed over recent closures of hundreds of stalls for rent arrears they feel are symptomatic of predatory and oppressive regulatory oversight.

Vendors of the Straw Business Person’s Society (SBPS) marched to the square in a bid to raise the profile of longstanding issues afflicting Straw Market businesses, chief among them said to be the lack of ownership, respect or job security despite intergenerational service at the forefront of the tourism industry in a bleak economy.

According to vendors, more than 200 stalls have been shuttered for overdue rent in recent weeks. The Tribune was unable to obtain a response from the Straw Market Authority up to press time.

SBPS President Rev Esther Thompson said: “They sent down a notice communication February 23 telling the vendors those who are on agreement (they) have to bring their account current, and anyone who is not on agreement to bring it below $200, short of that licence will be revoked until further notice.

“The stalls are closed, in the October exercise, 127 stalls were closed, in this session of the 223 that were affected, they closed 51. This Sunday they closed another 25. I understand they are going to look at accounts weekly – anyone that misses a payment, their stalls would automatically be closed.”

Rev Thompson said vendors have asked for all stalls to be returned and to be granted a year waiver for rent in a bid to allow vendors to bring their licences and National Insurance Board payments current.

“Give them some relief,” she said. “I was told if the vendors can’t pay their rent, they will have to leave because they have a whole list of people waiting to get in. I think they have interests in the stalls and have persons they want to give it to, and they are using the arrears as weapons.”

One angry vendor said: “We got bills at home, people light off, people water off, people have children what on the road have to beg and that’s bad.

“We have the people in the high places who eating lavishly and throwing out the food and people hungry. People is be hungry, can’t even find nothing for their children to eat and you closing down stalls?”

Another vendor said: “We are tourism ambassadors. We are one of the first set of people that the tourist sees, we are the forefront and they have us under Ministry of Works. We do not dig road or pave road or nothing, why do they have us under Ministry of Works? We are tourism, we are a tourism product, they throw us in the back of the bush like we are second class citizens. We need to go back under tourism so we can be recognised as ambassadors.”

The vendors hoped to get the attention of parliamentarians attending House of Assembly, but did not make contact with Minister of Works Desmond Bannister, who has oversight of the Straw Market Authority in his portfolio.

Yesterday, Mr Bannister told The Tribune officials have been lenient with straw vendors in the past. Mr Bannister said he assured vendors during a recent meeting that lighting issues were being addressed, which he noted was an issue that has impacted the Bay Street market for several years.

“When we came into office we met large numbers of vendors who had not paid their rent for years,” Mr Bannister said.

“The receivables were staggering despite the fact that the rent is only $37.50 per week. The board has been very lenient with vendors who were in arrears, and the vast majority of them have complied with requests to make financial arrangements with respect thereto. It is noteworthy to observe that many of the persons who were on Bay Street have not honoured agreements that they signed. We urge them to become current.”

The Tribune heard stories from vendors who claim to have made as much as 70 per cent payment of outstanding balances, only to be further denied or forced to wait up to two days to reopen. Each day stalls remain shuttered result in deepening financial losses, vendors said.

Sheryl Edith Brennen, a 56-year-old second generation vendor, said: “I used to be out there from my mother time, it’s a generational thing. I went up there, I borry (sic), beg, and scrap $600 and I take it up to the office and they told me they could not open my stall, and that was more than half of what I owe.

“Then they have people there, what I know, owe thousands of dollars, and they still to they shop. It is pure favouritism, bias. You get people come there and pay $3,000 and because they still owe $42, they tell them come off the property. What you call that?”

Fifty-one-year old mother of four Brunhilda Thompson said: “I was a straw vendor for all my life, the market is all I know. I have kids to feed, I have rent to pay.”

Rebecca Small, a 55-year-old third generation vendor, insisted yesterday the critical challenge between vendors, the SMA, and the government, was not over economics but a severe cultural disconnect. She pointed to the lack of success of initiatives mandating “authentic” craft, insisting the current model being forced on vendors was unsustainable and unrealistic. She also noted the stiff competition on Bay Street from neighbouring commercial storefronts peddling touristic offerings.

Ministers of Finance and Transport, K Peter Turnquest and Frankie Campbell respectively, stopped to speak with vendors yesterday and reportedly advised them that they will work to arrange a meeting to vent concerns.

I will tell you about predators:

It is deeply ingrained in our society. From doctors, lawyers, politicians, especially politicians, everybody wants things fior free,

I agree with your sarcasm.

These vendors really expect never to pay their rent. Then they cry when they get locked out. FOOLS!

Rent in there should be much higher so that it doesn't attract the vagrants who have stalls in their now.

The people protesting will always be in arrears because they have never been educated properly. IGNORANT!!!!

Well said. The vendors do not give away their products, but they expect everybody else to provide services to them, free of charge. Yes, it is in the national character: “Evy’body be a predator but me and my mummy.”

There are T-shirt stores on Bay Street or in the surrounding area which pay a lot more then $40 a week (and yes still more if you extrapolated the size of each store). They are selling many of the same items the straw market does. How are they able to make it when they have the additional overhead of electricity etc which the straw market does not? This is the same everywhere the Government provides areas for Bahamians to sell their wares. I am sure we will find out that many have not paid their rent at potters cay or fish fry, and yet these rents are considerably lower then what someone would have to pay if they were on private land and not public land. If this was a private landlord they would have been kicked out a long time ago, but as its Government it is always woe is me. As it has turned political no doubt the Government will back down and we will be one step closer to them raising taxes on all of us to ensure all those who suck off of the Governments teat never have to pay their way.

Government better not back down because of a bunch of ungrateful individuals. It is just a shock to their system but they will have to get over it!

They need to move the straw market over the hill where the vendors belong. They simply don't understand what it takes to keep the building clean and sanitary. They don't care if the building is rat infested or smells of urine and is not maintained; that's normal; that's their standard.

That is the whole problem ...... they have no sense of value of Govt. property

these people are always begging for relief and the people of the bahamas have to pony up for them?? they can't even pay $40 a week for prime realty in down town nassau? I say get rid of them any generations there today appear to be selling made in china or hecho in mexico anyways so any intergenerational cultural service is giant crock of BS created by some pro bono lawyer looking for headlines......

If i have to pay my rent and other bills so should they. They get no pity from me. Their arguments are laughable, barely worth publishing

The vendors are just being plain ridiculous. Perhaps THE POLL included a good cross-section of THEM. Not paying rent because of some stupid feeling of entitlement has become ingrained. Governance for votes does indeed have to cease if the country is ever to recover. There will be much push-back but the administration needs to stand firm. If there are too many vendors none of them will be able to make a decent living. Paying rent is part of business. Wonder how many of the vendors have current business licences or are they exempt?

What's the latest update re the operator Comrades long delinquent in rent payments at Fish Fry on Kelly Island?

Wow... talk about a sense of entitlement. The government should raise the rent on these stalls since they have a problem paying 37 dollars a week. I think 800 a month is more than fair!!!

Many of these vendors who rent are in arrears, but they are in one hundred dollars week A sue

We da people should not be supporting these vendors not being able to pay the heavily subsidised rents by the sweat of the rest of the population who catchin hell an calling it a good time. The actual owners of these stalls should be investigated to see if they are not white collar politically connected and someone os frontin for them like the taxi plates, jitney plates, liquor licences??? Given that the govt is always talking of more cruise ship passengers etc and the vendors not making money does not quite add up. A survey or censis needs to be done on Bay St as to who is employed, wage levels, benefits to corrolate taxpayers money spent on tourism advertising Bay St and maintenance etc to see what all the hundreds of millions of taxpayers money get in return!!!

The last time I was in the straw market was this last time last year. Nothing that I saw was made in Nassau. I found the same junk in Cuba and in Dominican Republic.

The market is smelly, dingy, filthy dirty and very unpleasant to visit. Why it has been left to look like it does is a reflection of what the whole of New Providence now looks like. No one had an respect for the place and doesn't appear anyone will take responsibility to clean the place up.

While they are at it, why arent they evicting the lady at the airport who was $5 million in back rent? Long line waiting to get in there as well. Tribune. How about a follow up story to that vendor?

I agree with Bannister ......... A long waiting list can easily fill those market booths