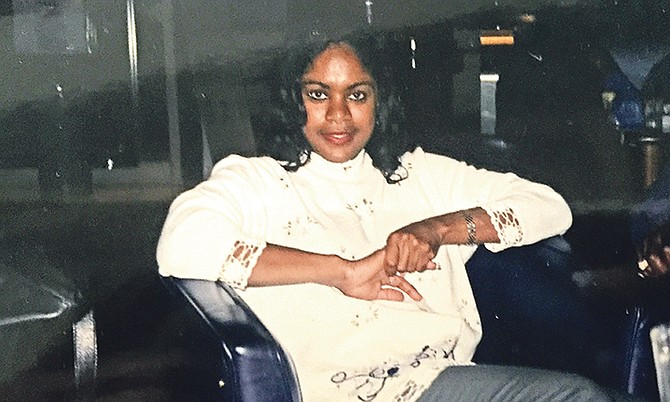 I am used to seeing Sharon all dressed up to the nines – hair done, clothing on point and always wearing a big smile. When her cousin contacted me to say Sharon had developed breast cancer and her attitude is so commendable she thought I should visit her for an interview, I obliged. However, I was not prepared for the Sharon I met. Her big, beautiful coif is reduced to the scalp, and although she was never big in size, she is definitely smaller. The only thing that seemed the same to me were her beautiful eyes, her voice and the big, bright smile that usually greets me.

Obviously a little worn from a recent chemotherapy treatment, Sharon sat with me and spoke candidly about what she has faced since being diagnosed with cancer. She also spoke about how she has managed to remain in high spirits through it all.

In October 2016, Sharon took advice from a radio programme which was promoting breast cancer awareness month and did a self breast examination while in the shower. To her surprise, she felt a lump. Two months later, she was having a mammogram and ultrasound to find out what that lump was. October is breast cancer awareness month, so there was media everywhere advising women to check their breasts. Only now that she has taken heed, Sharon can advise that all women should check their breasts on a regular basis.

What women in The Bahamas may not realise is that breast cancer could affect any one at any age – even men. I recall there was a case of a ten-year-old girl in Eleuthera with a breast cancer diagnosis. For this reason, Sharon says it’s important to pay attention to your body. In the UK, Kris Hallenga founded the charity “Coppa Feel” after being diagnosed with breast cancer at the age of 23. The charity focuses on promoting early detection of breast cancer, encouraging women under 30 to regularly check their breasts. For Sharon, taking heed made all the difference.

With the first mammogram and ultrasound Sharon took, the doctor informed her the lump she felt was fibrocystic; it was benign and not cancerous and therefore, she should have nothing to worry about.

She went on with her life and even got married in April 2017, becoming Sharon Miller-Stubbs, with high hopes for a great future. But soon after, she started to have pain in her arms and her sister Janice took her to the hospital to have it checked.

“I was referred to outpatient clinic to have another mammogram and ultrasound, and by July the test results came back,” Sharon said.

It wasn’t good news; but what was worse is the way in which she was delivered the news: “The first doctor at Princess Margaret Hospital wasn’t clear so we asked for another doctor, but the second was worse than he was.

“I went in to see him. He never introduced himself and he was cold. He read the results from the computer and said ‘Oh! It’s cancer!’ He just spat the words out that changed my life. No care. My sister and I were in shock. We paused. He didn’t do any examination on me, and he never told me what stage I was on; basically he gave us no information. I asked him if there were any options and what I could do. He said the only thing he could do to help if it is too far gone into the bone or the blood is to cut off both of my breasts. My sister got upset and said she would report him because he was not sympathetic at all. We went and made the report, and they told us to follow up with a letter to the Public Hospital’s Authority, but we had to deal with this diagnosis so we had no time to do it.”

Sharon felt the need for a second opinion and did so by visiting the Jackson Memorial Hospital in Florida. There, doctors told her the lump was indeed cancerous in the left breast and that there was “something very small” in the right breast.

“I decided to come home and have the treatments done here at home at the cancer centre on Collins Avenue,” she said.

To date, Sharon has already had 12 chemotherapy treatment sessions – six double sessions. I knew nothing about how treatments worked, so she explained te first thing they did was conduct a surgery on her to implant a port just above her breast. This port was graciously provided free of charge by the Sister Sister Breast Cancer Support group and their relationship with Ports International. Prior to this, she had four biopsies where breast tissue was removed to test for cancer. After this she has had to endure a lot of bloodwork and scans, including a PET scan done in Florida to ensure the cancer was isolated to her breast.

“I felt devastated at first,” Sharon shared, “Because I was having scans and bloodwork what felt like every other day. I looked like I was a hundred.”

“My doctor at Jackson Memorial was caring. She said Sharon, you are curable.”

The doctor, a female this time, told her she would have to do 12 double chemotherapy sessions and eight single ones, and then they would see if she had gone into remission. The lump, she said, was 10cm but she can feel it shrinking.

“I never dreamed this would happen to me because my mother (Naomi Williams) who is 81 and my father (Ashlyn Miller) who is 77 are still living. My mother has ten children and I am the only one with this diagnosis. None of my grandparents died of cancer.”

Looking back to try to determine what happened, Sharon believes that wearing wired bras may have been a factor because self-image was always important to her. She warns women to take heed to the cancer support groups which give advice about taking precautions – like the wearing of wired bras. Nowadays, she chooses not to wear a bra whenever she is at home – something many women don’t do. Also, she knows she was “sweet mouthed” and enjoyed sweets. Her job as a salesperson always on the road led to her making do with junk food instead of eating proper meals often. Nowadays, she has opted for a diet which is more plant-based, and may only have a little chicken or turkey once in a while. She no longer consumes dairy or sugary food and would drink moringa or sour sop leaf tea without the sugar she would have once had. She loves to drink coconut water from the shell, drinks lemon water in the mornings, and takes vitamins and supplements regularly.

Sharon is an island girl at heart. She grew up on Acklin’s island with her grandparents and cherishes the years she spent in “the field” (farming), gathering wood for her grandmother’s outdoor kitchen, and “toting” water. She finds herself going back to her roots and her knowledge of the bush medicine of The Bahamas to help her through.

“I stay positive – you have to have a positive spirit,” she advises.

Once the news set in, she resorted to the attitude that she is well-known for: “I remained calm, optimistic, positive and I was ready for chemotherapy. I was ready to face it. I decided to remain focused on God. I went through with little side effects, such as the numbness, vomiting and diarrhea, and memory loss. I really was blessed; all I can recall is a little nagging in the stomach after each treatment. My sister Janice cut my hair when I started combing it out in balls, and she really helped me through this whole process.”

Sharon has had to also stay positive for her husband, Henderson Stubbs. For him, it’s difficult because he lost his first wife to pancreatic cancer. For Sharon, she plans to fight this battle not only for herself and her husband, but for her two daughters, Lashan and Deshaughn and her grandson, Mason.

“No one is exempt,” she warns.

“We take things for granted. We try to remedy ourselves. You should get checked by a medical professional, even if it is a constant pain in the stomach. Years ago, you hardly heard about cancer, but these days are different. Women should have regular checkups with their doctor and conduct self breast examinations. Change your eating habits now!”

The support of her entire family and her friends has been immeasurable in terms of her ability to fight the battle, she says, adding that families should stick closely together not only through illness, but through life.

Sharon has already accrued more than $20,000 in medical fees and her chemotherapy sessions are not over. Her prayer is she would not have to have her breasts removed, although doctors say it may be a possibility. She says she is remaining confident the current chemotherapy sessions will send the cancerous tumour into remission.

Her family and friends are hosting a benefit concert to aid with her medical expenses on Sunday, April 29. The “Spring Gospel Concert” will feature the legendary Rahming Brothers, Minister Emily Williams, Christian Massive, Edison Sumner, Voices of Praise, Allison Rolle, the SBC Adventist Youth Choir, Koe Smith and Christian Life Church Dance Ministry. The event will be held at Kemp Road Ministries beginning at 7pm. For more information, email her sister Janice at janiceevans861@gmail.com or yolandamiller@coralwave.com.

Thank you for speaking out. It sounds like you have the truth pegged. We need to change out diets, the entire way we live and eat. But, more importantly, we all need families members like "Janice" in our lives. I hope you are cured and get better, for yourself and all those around you.

Indeed. Trust the moronic 'doctor' at PMH has been terminated. Prayers for a full recovery for this brave lady.