Not One - But Two Close Escapes From Shark Attacks

Shane McConnell, 12, of Scotland, and the injuries he suffered when bitten by a bull shark in Bimini, needing 52 stitches. 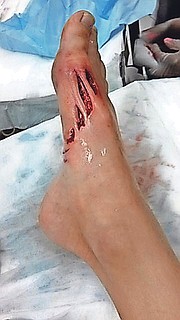 TWO people, one a Scottish boy, are lucky to be alive after they escaped separate shark attacks – one in waters off New Providence and the other in Bimini – this month.

Bruce Rowan, of The Bahamas, was attacked in New Providence by a tiger shark last Saturday and was able to escape by pushing his surf board into the animal’s mouth and climbing onto a nearby reef.

Shane McConnell, 12, of Scotland, was bitten on the foot by a bull shark in Bimini earlier this month. Shane’s wound required 53 stitches.

In an interview with The Tribune yesterday, Mr Rowan said he was attacked while surfing in the waters near Nirvana Beach.

Mr Rowan has been a surfer for more than 20 years and also participates in other water activities, including free diving, spearfishing, and deep-sea fishing.

This was the first time he has ever been attacked by a shark.

“I was just outside of Nirvana and I was sitting on a surfboard and the water was only about six, seven, maybe eight feet deep,” Mr Rowan said.

“And I was just sitting on the board minding my own business and this tiger shark…just came charging, straight up on my left side.

Mr Rowan “scrambled” onto a reef, where he was stranded for an hour, waving and calling for help. Although he was less than a mile from the shore, he was wary of getting back in the water in case the shark was nearby.

Mr Rowan was eventually rescued by two men, who took him to the Lyford Cay Marina.

Although Mr Rowan was unharmed in his encounter, 12-year-old Shane unfortunately was injured.

Shane was on vacation with his family earlier this month when his attack occurred.

His family were staying in Florida but visited Bimini where they spent the morning “jet skiing off a yacht.” Later that day, they were swimming at the Big Game Marina resort when Shane decided to return to the boat to get his “lucky cap”.

He was walking on the dock when he tripped and fell into the water and then suddenly a shark grabbed him by his feet.

“I put my hand over my eyes to block the sun out and accidentally tripped and fell into the sea,” Shane said from his home in Edinburgh, Scotland.

“Then I saw a shark’s body rise out of the water. I was splashing a lot, and I think it thought I was food being thrown in. I shouted for help when I saw it. But then it disappeared under me. I felt it brush my hand – I thought it had missed me.”

Shane pulled himself up by a ladder and was assisted by three security guards. He said he felt no pain.

Medics later said that if he had not been wearing shoes, he could have lost both feet and possibly bled to death.

Although his injuries required 53 stitches, Shane says this has not hampered his desire to become a marine biologist.

“Even after this, I am happiest when I’m in the ocean.”

Muddo! Look at those gashes!

I am glad they both survived what I am sure is a terrifying ordeal!

Wow! What a horrifying story. That's why I never go swimming in certain areas around Nassau. But thank goodness no lives were lost.

Two things maybe three come into play why shark attacks around the islands and lose to shore are happening. 1. there are several tourist businesses that allow guests to swim with and/or feed sharks and other land aniimals. So sharks are now associating people humans with food and being fed. 2 And since these sites are just offshore they have a tendency to draw sharks loser to shore and loser to people and 3 Since there are now laws preventing the killing of sharks, the shark populations are increasing and as food becomes more scarce, sharks are figuring out more creative ways to get it. Some sharks follow fishing boats and take all of the first catches that are caught. Sometimes divers cannot even go into the water because they are swarmed with sharks.. . . If you think animal behavior is not adaptive drive around the inner city areas and notice the number of 'native' chickens wandering around some hens with 7 and 8 'biddies' in tow. And not only do these chickens know how to cross the road, but the mother hen stands in the middle of the road or runs circles around them until every chick has crossed safely. And most of the the dogs don't seem to bother them either.

Well explained John. The Sharks are being trained somewhat like Pavlov’s Dogs. In many places now the Sharks are accustomed to the sound of boat engines and simply congregate when the boat comes to a stop in anticipation of their next meal. Just check out the “serious” Sharks permanently hanging out now under the Docks in the Mainas at Clarence Town and Hawks Nest. Anyone accidentally falling off either of those Docks will be devoured in seconds, no exaggeration. These are not “passive” Nurse Sharks like at Highbourne, Compass and Staniel Cays, these are truly the bad boy apex predators!

Maybe you missed the point. Mr. Rowan is a surfer so he is one who is regularly in the sea. But despite his frequency in the water, aptthis is the first time he was attacked by a shark.

Not sure the before and after pictures were necessary. There should have been a disclaimer with the article. Not everyone would want to see that picture while eating breakfast!

we understand...in other words there's no first time