Waltiea Back To The Books 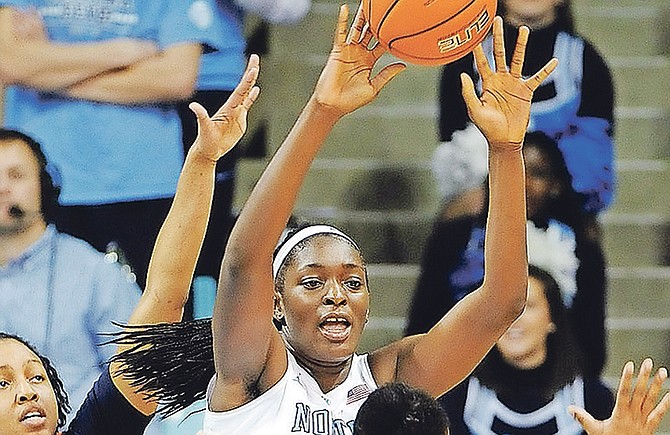 SHE'S one of two professional female basketball players, but Waltiea Rolle said she doesn't mind putting her career on hold for the next three months until she completes her tertiary education.

While the leagues overseas are on a break, Rolle will be returning to the University of North Carolina to complete her degree in exercise science-sports administration. She has 8-11 more hours and she will be officially done at the institution where she had a remarkable career as a member of the Tar Heels.

"I will probably go back in August," said Rolle about playing basketball after she completes her studies from May to July. "The federation isn't opened yet. Everything will start to pick up at the end of July and the beginning of August.

"I'm just waiting for it to open up in August so that I can play again in the European League. The WNBA (Women's National Basketball Association) will be played before that, but at that time I will be in North Carolina taking my classes. I think it's important for me to get my degree."

Rolle, 27, starred as a defensive prowess for the North Carolina Tar Heels from 2009-2012 via Westbury Christian School in Houston, Texas, before she ventured into the pro ranks as the first Bahamian to play in the WNBA after she was drafted by the Minnesota Lynx in 2013 and with the Seattle Storm.

Here at home since she finished up the past season in Turkey, Rolle said she's working out with coach Marvin Henfield on trying to brush up on her game so that she will be in a better position physically when she heads to North Carolina at the end of the month.

"I haven't looked at any teams yet because I don't think that I'm ready for it," she pointed out. "I want to get my degree first. Once I was presented with this opportunity to go back and complete my degree, I jumped on it.

While she's not ruling out the possibility of returning to the WNBA where she broke the barrier for the Bahamas as the first player to participate, Rolle said she would welcome the opportunity to play with Grand Bahamian Jonquel Jones, who is coming off a sensational second season with the Connecticut Sun. The 6-6 forward/centre out of George Washington emerged as the WNBA rebounding champion this past season.

Rolle said if the opportunity doesn't present itself, she's quite content to return to Turkey to play where she participated on the Edremit Beelediyesi Gurespor the last season but hopefully at a higher level of competition. There are also a few other options that she will consider when the time comes.

"Israel is not a bad place to play as well, who knows," she stated. "I have offers from Israel and from Lebanon, but that is not until August. That's just the beginning. Teams have not yet started to reach out to players yet.

"So it's good that I will get this opportunity to go back to school and complete my degree," she said. "I will play a couple more years and that's me."

The mother of two young daughters said she's keeping an open mind to what's ahead of her. Rolle is just taking advantage of the amenities of home before she heads back on the road.

"It's always good to be around family and friends," she said.

As for competing on the women's national basketball team, Rolle said she would like to see the Bahamas Basketball Federation take a more professional approach to the game.

"The federation just wants to put you out there to play, but they don't understand the circumstances behind it," she said. "You could get hurt and that's basically your career.

"If you get injured or hurt, it could cost you your career because it's more difficult for teams to take a chance on you. So all those things they have to look at."

Rolle said in addition to the pro players being compensated, she feels that the coaches need to be more dedicated to the game in full-time capacities so they can spend more time preparing the team.

"We are really not moving forward because we don't have these things in place," she said. "We may take it for granted, but it's something that needs to be done, if we want to get the best teams to represent the country. "And I'm not just referring to the women's team, but do you think (Sacramento Kings' guard) Buddy Hield or DeAndre Ayton, who is considered to be one of the top three picks in the NBA Draft in June, will come home and play without all of these things in place?"

As a professional athlete, the 6-foot, 6-inch centre said it's important that the federation provides that type of forum at home so that they can be comfortable in representing their country.