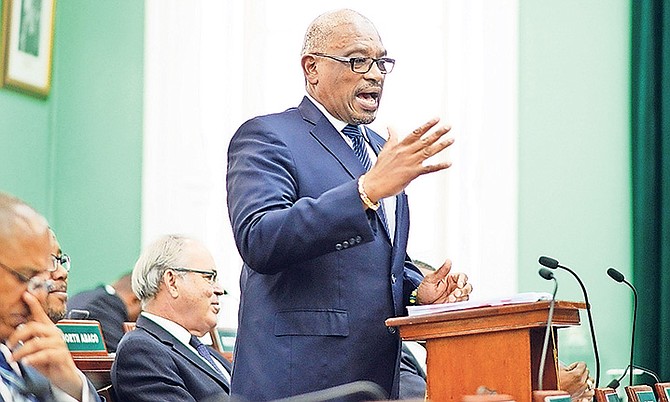 The Bahamian economy is set to grow by about 2.5 percent during the course of the year, representing what could perhaps signal its best growth in ten years.

“This may be he best growth since the Great Recession of 2008,” Prime Minister Dr Hubert A Minnis said while addressing the CEO Network Conference last night at Melia Nassau Beach resort.

“Tourism is doing very well. Both Atlantis, Paradise Island, and Baha Mar, are doing exceptionally well. Our economic prospects are improving, but we must do more to boost jobs and opportunity.”

“The wanton corruption of the last five years has ended but we must continue to reform our laws in order to confront a culture of corruption. Our public finances are improving though we are not out of the woods.

“Still, amidst our challenges, The Bahamas is much better off than it was just a year ago when we were headed into an abyss from which we would not have easily recovered. The recovery of our national prospects and our economy has begun and has taken hold.”

Prime Minister Minnis said the administration also has a number of exciting tourism and investment projects slated for Grand Bahama.

“We continue to promote investment opportunities in the Islands of The Bahamas. It bears repeating: the restoration of the economy of Grand Bahama is critical for the economic recovery of The Bahamas.”

Prime Minister Minnis told the gathering that his Administration has an ambitious infrastructure programme slated for a number of the islands of The Bahamas.

Capital development and infrastructure, Prime Minister Minnis said, are “vital” for the growth of tourism in the Family Islands. A number of key infrastructure projects will be announced during the upcoming budget debate.

He said a number of “very promising investment prospects” are on the horizon that will boost economic growth and jobs. These, he said, will be announced in due course.

“Let me note that while we have to see what happens over the longer term, crime is down in New Providence,” he said. “While this is a positive development, we must continue to improve policing and the criminal justice system, while promoting social intervention to help tackle some of the causes of crime.

“Through the Citizen Safety and Justice Programme, we are providing education and training, intervention measures and job opportunities for former offenders and at-risk youth.”

The prime minister said his administration is committed to political, social and economic reform and transformation.

“Each of these areas of national life, are pillars of our nation. Political, economic and social reform must work in tandem. By example, economic development requires reform in education and training. Reforming government, an ongoing process, will better help to unleash the potential of businesses and entrepreneurs.

“Economic transformation requires us to combat corruption at all levels of Government because corruption retards economic growth and poses a tremendous burden on Government finances.”

Please stop being so ignorant. The Prime Minister has consistently lamented his desire to improve not just Freeport, but Grand Bahama as well. It will take years to assess, plan, and carry out economic improvements throughout Grand Bahama. The stupidity among Bahamians is astounding.

I agree Cobalt ....... Freeporters are the most entitled, crybabies in this country ...... Try living south of Exuma.

Comrade Minnis doesn't come off sounding rosy when he's jet setting away colony to give speeches foreigners.... them must think we're all either lazy or criminals back home.

He seems obsessed with corruption. could it be the OBAN deal? Bah Mar was so bad now it is so good. A masterful spinner indeed

As an avid PLP supporter, you really don’t have a tounge to talk. Your government is the hallmark of political corruption and ineptitude. The only reason that Christie and his cohorts aren’t in prison is because the Bahamas doesn’t have proper legislation drafted and in place to adequately prosecute corruption. Thus far, the laws of the Bahamas only allow politicians to be prosecuted for bribery, which many PLPs are now facing. So shut your ignorant mouth and stop talking foolishness.

Here we have it. . .THE PEANUT GALLERY HAS SPOKEN. . .the song of silence they will never sing. . .no matter how well this government does. . .the few and the rabid. . .

Some say you don’t take sand to the beach, But Hubert Ingraham took sand to several beaches on New Providence and made great beaches of them. Minnis campaigned on the neglect of the inner cities and promised to improve lives in these areas. And since he has several MPs riding on that promise he have to at least give it a shot. And whilst Minnis and the FNM will not be able to turn back the clock and turn the inner cities into the bustling But quint and crime free and violent free little townships that was, just a little interest shown to these areas will mean so much to the people that live there. And remember the people needs jobs. Them peoples need work. And it would have been good if Minnis could pair these areas with the revitalization of Down Town and get some economic activity in all these areas at once. And remember because of the effects of urban sprawl there is no one town center that will be common to everyone anymore.

Yes, John. The Prime Minister understands that citizens living within the inner cities need jobs. He understands that the entire nation needs an economic boost. But the delimma that we all face is that economic development takes TIME.
It may only take a second to make a mistake, but it can take years to rectify that mistake. And here in the Bahamas we have made TONS of mistakes. So while the government is doing its best to initiate an adequate economic foundation in the midst of a “mess of a country”, I encourage every Bahamian to take a long look in the mirror. The problem I see with many Bahamians is that we want our situation to change, yet we fail to change ourselves. We want our situation to improve, yet we fail to improve ourselves. We want the government to accomplish everything, but ask your nearest neighbor what has he accomplished for himself. Successive Bahamian governments have failed because we the people have continued to fail. The government is simply an extension of the people it represents. The government is extracted from a pool of its own citizens. So when we begin to improve ourselves, the government will likewise begin to improve.

Here’s a fun fact..... Foreigners come to this country with little or nothing, and in a little over a decade are successful businesses owners and entrepreneurs. The Chinese do it, the Jamaicans do it, the Haitians do it. Yet all we Bahamians do is sit, complain, and blame the government. If we want change in our country, we have to be the change. If we want change in our communities let’s start by changing our households. Let’s start by talking with our neighbors and forming community resources. We as Bahamians are NOT helpless. We can help ourselves and improve our own country.

Notice how The Tribune silently slipped in the small headline that murders are down by 50%. Most Bahamians don’t believe most of the killings were murders anyway. Assasinations is more like it.

Yes sir ......... vigilantes and hitmen account for probably 85% of the so-called murders in this country since the drug era began.

I wonder how much of this "economic growth" will be the result of government borrowing to finance capital projects to improve unemployment numbers? Thus far, I am not impressed!

Cry babies?!?! God I hate party loyalists. You people are just too stupid for words..

Nothing has been done to get Freeport on it's feet. A year is ample time to at least see progress. Instead Freeport has declined drastically since this do nothing government was sworn in.

Be loyal to the country not to a damned lying, incompetent political party.

And how will Freeport's collapse affect the nation's overall economy?

Freeport's recovery is vital to our country's overall economy. Wake the hell up and stop being a dumb ass party loyalist.. sheesh..

Have you noticed that een nobody checking for your tirade there fella. . .you is the biggest one around here!

BOL ......... Anyone who wants to make money in GB can ...... You check every Long Islander over there and they are doing well, owning businesses and working hard...... So, the lazy ass Freeporters who are looking for handouts or entitled positions without training or degrees - stop bitching!!!! And stop calling yourself Proud, Loud, and FNM ...... Ur embarrassing.

I can't say Grand Bahamians are looking for hand out sir, It seem we always forget how this all started, 2004 by two ladies name France and Jean, the 2005 another woman, Wilma, that connected to the 2007 thru 2012 recession where all the hotels were already damaged. More hurricanes came and wipe out what was left. We have had our time. Both governments, the current one and the former tried, to bring this island back, we not looking for handouts here. GB people are strong, resilient, and are only asking for what they deserve. Those other southern islands experience their fair share of hurricanes, but Nassau has been speared so far, keep praying cause if it happen there, dog eat they lunch too... less we forget,

The mentality of Grand Bahamians is far different from other family islanders. Those in GB have a very strong entitlement mentality. I have to agree with sheeprunner12 on this one!