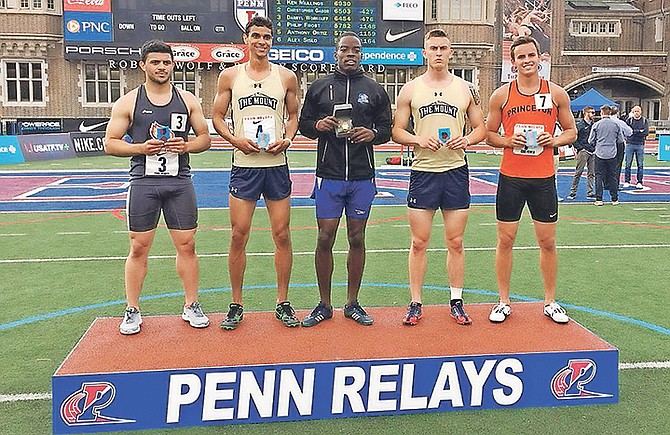 Ken Mullings on the medal podium yesterday after he took the gold in the college men's decathlon at the Penn Relays.

Mullings won the gold medal in the college men’s decathlon in the Penn Relays at Franklin Field in Philadelphia, Pennsylvania, yesterday.

He rounded out his numbers in the competition with a clearance of 3.80m.

The school hosted “Ken Mullings Day” in his honour to commemorate the feat.

In achieving his accomplishment, 20-year-old Mullings shattered the previous indoor record of 4,141 points that was set by Desmond Major at the NJCAA Championships on March 8, 2014, by accumulating a total of 5,059 points.

Mullings, who began his tenure at the University of the Bahamas in 2016 as a physical education major after graduating from CC Sweeting High School in 2015, said his goal now is to shatter the Bahamas national outdoor decathlon record of 7,421 points that was set by Antonio Greene at the Central American and Caribbean Championships in July 1989.

Once he can improve on his clearance in the pole vault and his run in the 1,500m, Mullings said he can and will add the outdoor multiple event records to his ledger before he graduates from UB.