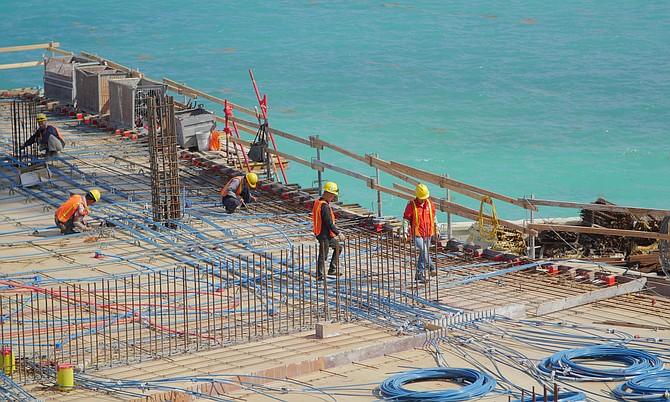 Workers at The Pointe development site.

LABOUR Minister Dion Foulkes says he plans to meet with executives of The Pointe on Tuesday to present the findings of a workforce census conducted by the Department of Labour at the $200m development.

He said he would not reveal the results of the census until speaking to the developers and briefing Cabinet.

In the wake of this, Bahamian Contractors Association President Leonard Sands levelled a new round of criticism at the Minnis administration, saying it was a sad day when officials do not have “their finger on the pulse” on such a situation.

“I plan to meet with the management of The Pointe on Tuesday morning to give them the results of the findings and to give them an opportunity to respond to what the census found,” Mr Foulkes said.

“I will then present to Cabinet and once that is done I would make a statement to the public.”

Asked if he could say whether anything was found to suggest the workforce ratio clause of 70 percent Bahamian workers to 30 percent foreign in the Heads of Agreement was not adhered to, Mr Foulkes said: “I would rather not go into that before I’ve presented to Cabinet.”

When asked if he saw this as a lack of transparency, Mr Sands said: “I don’t know if there is as much lack of transparency as there is lack of not having a finger on the pulse of the matter, it is a sad day. That’s what I believe. I think they don’t literally know and if they now know who is it going to be reported to and what is going to be the action?

“It’s not being handled well by the government and this matter is far from being settled. The public wants answers on this and we still await to see what the government’s response is.”

Last week The Tribune was told investigators from the Department of Labour discovered a disproportionate number of foreign labourers to Bahamian workers at The Pointe.

This was justified, according to a well-placed source, by The Pointe’s developers China Construction America that 100 Chinese nationals remained in the country following the completion of The Pointe’s parking garage for specialised purposes.

The workers were tasked with laying an apparent intricate steel foundation for the next phase of the development.

Developers explained to the government, The Tribune was told, a full complement of Bahamian workers are not needed at this time, but would be called upon once this portion of construction is finished. It is unclear whether this represents a breach of the workforce clause in the heads of agreement between CCA and the government, as the developer has made a case why there are more foreign workers on the project when compared to local builders.

The investigation was opened after Tribune photographers earlier this month monitored who went on to the site and with the exception of three or four Bahamians and a guard at the gates of the development, everyone else appeared to be Chinese.

Previously, this newspaper observed workers on the site in both January and February and it was a similar story. Dozens of Chinese builders walked on to the site every day from a building, which lodges the workers opposite the development, and virtually no Bahamians were anywhere to be seen.

Ma 94,109 comrades voting for the 35 red shirts on 10th May 2017 - were not only outright lied to throughout the general election but lied to repeatedly. Now the government literally won't tell the 94,109 voters what they now can no longer hide that they should've known all alone about the absolute missing workers. What they now still ain't saying what they now know is how many important types workers never made it to The Pointe's payroll...... natives. Mr. minister, go stick It's da Peoples time, up yours, the PM's, KP's and Carl Wilshire's - along with rest Imperial red cabinet colleagues ass holes... and I hopes they is deep enough "receive back" all red crap out there. It's time lay down the ground works in a "Preparation H" pre 2022 Revolution!

You forget this agreement was done by the PLP and they friends, families and lovers them aye. . . Fred mussies have to come and tell you that aye. . .like he had to remind yinna that yall knew that yinna was going to lose that last election!

It doesn't matter which administration entered into the agreement with the company. The agreement has clauses that are to be adhered to, either they are or they're not. It's the administration's responsibility to ensure they are being adhered to. an entire year has passed, pointing fingers at the PLP is really old.

I'm really baffled as to why the minister had to do a "census" in the first place or present this census to the Pointe's management. It makes no sense. Management has already said we don't need Bahamian workers now. Your only question should be, does this line up with the work schedule they submitted with their business plan. That's it. And if there's no work schedule and YOU have been in power for one year, you have a bigger problem than how many foreign workers are at the pointe

Sometimes i feel like the bahamian people dont do enuff jed. Why we have to wait on man dem to take action. We should be banding together by the masses. Its more of us than them!

we fail to forget China is a Communist country and a closed society The Chinese believe in operating in secrecy and working with other Chinese rather than with strangers. Even the businesses that operate locally hire few Bahamians or other nationalities. and Chinese hardly ever mix socially with other people. So where does one draw the line? Violation of contract vs standard operating procedures. a national company vs free enterprise Bahamians will most likely only be hired when The Pointe starts sub contracting the various trades

I didnt know there was a need for a report or to keep the findings secret. The Chinese already said there are no Bahamians working here. The only thing for the Labour Department to do is check the heads of agreement, check the work schedule submitted with the business plan and fine the company if they're in breech or say carry on if they're not. Why make this a big production?

Our water is really pretty.

Isn't that the truth? It's exquisite. Love it in summer, like slipping into a warm bath.

Lets keep our water beautiful and clean. Lets make sure that no raw sewage and other garbage is being pumped into the water.

And is you check all the equipment on the site, they all also say ‘Made in China.’ The only thing they didn’t bring is the national anthem.

When one considers the significance of the historical value and space of the British Colonial Hotel ..... It is shameful that we have sold that property to the Red Chinese for a bowl of porridge.

Sorry, Sheeep, I missed something, the bch has historical value? How much and why? Built in what 1940 out of concrete by an architect who I suspect you don't even know the name of. I think it has zero historical value and no outstanding architectural features remaining after the three or four remodellings it suffered.

Im wid keeping the waters clean but this is a busy harbour and hundreds of boats moored east plus ever wondered what happems to all the conch slop, viscera, fish guts, skin, scales etc from Potters Cay sitting in mid channel.....