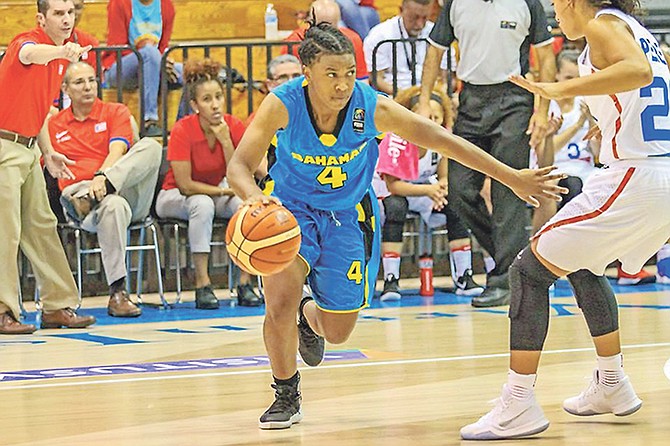 BAHAMIAN national team standout Valerie Nesbitt (in action above) will become the first local player signed by Yolett McPhee-McCuin in her tenure as the head coach of the Ole Miss Rebels women’s basketball programme.

BAHAMIAN national team standout Valerie Nesbitt will become the first local player signed by Yolett McPhee-McCuin in her tenure as the head coach of the Ole Miss women's basketball programme.

Nesbitt, a sophomore at Chipola College, committed to join the Rebels for the Fall 2019 campaign.

As a freshman, Nesbitt was awarded a postseason accolade following her first season of collegiate basketball. She was named a Panhandle Conference first team selection as a freshman in the NJCAA ranks.

She also totalled a team-leading 50 steals on the season. She finished with 18 points and five assists as the Lady Indians finished their season with a 69-65 loss to No.2 Gulf Cast State.Chipola finished the season 14-13.

It was her second 18-point performance of the year following a 96-48 win Over Arkansas Baptist in December. She set a season high with 19 points in just her second game of the season, a 72-69 loss to Florida Southwestern.

She dished a season high eight assists in an 87-51 win over Hillsborough Community College in November.

The Bahamas opened the tournament with a closely contested hard-fought loss to Mexico and went on to also drop decisions against Jamaica, the USVI and Puerto Rico before they won the finale against Guatemala.

McPhee-McCuin was named the Rebels head coach in April.

"I am extremely humbled and grateful for the opportunity to be the women's basketball coach at the University of Mississippi," McPhee-McCuin said at her appointment in April. "Once I stepped on campus, there was no doubt in my mind that Ole Miss had the potential to be a force to be reckoned with -- not only in the SEC, but nationally as well. I'd like to thank Chancellor Vitter and Ross for their complete vote of confidence in me, and I look forward to getting started."

The Rebels ended last season with a 12-19 record and a second round loss in the SEC Tournament.

McPhee-McCuin will be publicly introduced during a press conference at Ole Miss on Friday.

She completed an historic tenure with the Jacksonville Dolphins where the programme accomplished several new feats.

In her final game at JU, the Dolphins saw their season come to an end in the opening round of the WNIT when they were eliminated with a first-round loss to the University of Central Florida Knights.

It was the second consecutive season the Jaguars came up just short in a bid for the NCAA Tournament but earned a berth to the WNIT. McPhee-McCuin also signed a Bahamian player - Shalonda Neely - to join the programme while at Jacksonville.