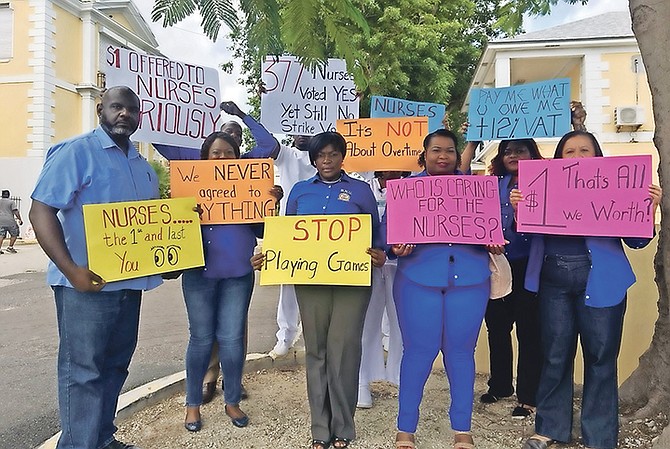 THE Bahamas Nurses Union's executive board demonstrated yesterday outside Princess Margaret Hospital regarding its ongoing issues with the Public Hospitals Authority and Ministry of Health, accusing the government of "union busting".

One major source of contention is the withholding of a strike certificate following a June 7 strike poll, BNU President Amancha Williams told The Tribune. The union is also angry over a new five day, eight hour shift system PHA wants to implement. The union says this will lead to burn out and increased errors.

"They're withholding the certificate," Ms Williams said. "We had 377 nurses voted yes, and seven voted no. So we don't understand what is their reasoning, why are you holding our strike certificate?

When asked what will happen if the Department of Labour does not meet these stipulations, Ms Williams said the union will "take it to the streets".

When asked if there will be a tactic such as a 'sick out', Ms Williams said, "We don't know what could happen. The streets would tell us."

She added that this could take place "anytime, anyplace, anywhere".

On April 30, more than 200 registered and trained clinical nurses staged a "sick out".

One issue that angered them was a 12-hour shift foreign nurses, who are not a part of the union, were asked to work at the time.

During a press conference held at the National Training Agency yesterday, Labour Minister Dion Foulkes said the strike certificate is being withheld due to reports that not all nurses participated in the strike vote.

"The law requires that all members, whether they vote or not, should have the opportunity to vote. So, today we sent a formal communication to the Nurses Union, asking them to comment on that.

"We've given them seven days to respond, and then we will make a decision whether to certify the strike vote or not, after we read their response."

On July 28, the Ministry of Health released a statement to "update the public" on the progress being made it ins discussions with BNU.

The ministry said, "With regard to the PHA, all matters regarding outstanding payments to members of BNU by the authority have been addressed."

It added that the only outstanding matter is the payment to staff in Grand Bahama due to the fire at the Rand Memorial Hospital, and promised that these payments will be made this month.

"The authority was awaiting a response from the union regarding a proposal to eliminate the nursing shortage at the various hospitals in New Providence - PMH and SRC - and Grand Bahama Health Services," the statement continued.

"To eliminate the nursing shortage within these hospitals, PHA will implement a five-on/two-off shift system for night duty nurses, which will effectively re-align work schedules to eight hours and improve service delivery to the Bahamian public."

According to the statement, BNU was given the requisite one month notice prior to the shift system being implemented.

The ministry also said that the "majority" of the 14 issues the nurses had requiring government attention had been "amicably" resolved. These included mileage allowance, cleaning of the Abaco and Exuma clinics, and vehicles being purchased or leased for Family Island and Special Services Nurses.

"The issues still outstanding require due diligence and verification before payments can be made. These include: payment, at special project rate, of nurses who worked during and after the passage of Hurricane Irma; the 2018-2019 payment of accelerated increment and promotion exercise for nurses who have obtained additional qualifications during the past two years; and review of all allowances and claims of overtime for payment of arrears."

The ministry also promised to make payment for the increase of uniform allowance of $50 per month, effective July 1, during the August 2018 pay period.

Regarding the shift change, BNU said that during a meeting held on May 10 with PHA, it was agreed that no changes can occur without the union's involvement in discussions and agreement.

According to BNU, shift proposals were eventually forwarded to the union, but PHA "did not respond to the response given by the BNU" by last Friday.

"However PHA has instructed its administrators to commence changes to the shifts without any discussions and agreements between the parties," the nurses' statement continued.

According to the BNU, there is a deficient of 395 PHA nurses and approximately 270 Department of Public Health nurses. In light of these figures, BNU disputed PHA's claims that a shift change is going to "improve quality of nursing service and reduce overtime," and described the shift change as an attempt to "(make) blood out of stone".

The union also called PHA's response to this crisis as "unwise" and said by mandating a reduction in additional staff overtime will result in increased burn out, increased medical errors, and "lack of quality service" provided.

they didn't get the strike vote because the gubmint figured their service level was the same whether they were on strike or not??

Nurses go through a lot who work in the PHA and the department of health. A lot of nurses here will be leaving to work in the US if conditions here don't improve for them.