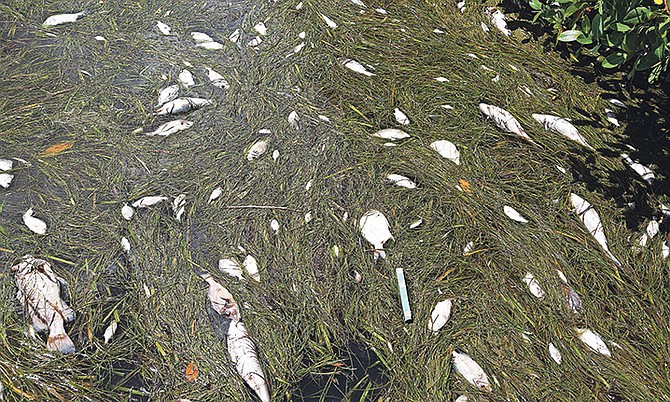 Dead fish line the mangroves on Anna Maria Island in Bradenton Beach, Florida, near the Cortez Road bridge on the inter coastal waterway. A bloom of red tide algae has swept in from Naples to Tampa, killing marine life. Photo: Scott Keeler/Tampa Bay Times via AP

On the front page of this past Sunday’s New York Times was a photo of a large green area that at first glance could be a grassy knoll.

It is not a knoll, but a lake, Lake Tai in China, all 869 miles of it, shimmering green as an obese and elongated emerald, thanks to an algae bloom that is devastating everything within its grasp.

Eight hundred and sixty-nine square miles is more than ten times the size of the whole island of New Providence just for reference purposes and while that lake and its algae bloom problem seem distant, far removed from anything that would trouble us, we need to worry. In fact, we need to be so worried that our concern causes us to spring into action because the very inaction that caused that algae bloom in faraway China is the same inaction that caused an algae bloom off Florida’s west coast that has left more than 400 sea turtles dead, killed manatees and driven tourists, holding their noses and breath, the other way.

The toxic algae bloom, also known as red tide, is sweeping the Gulf Coast, transforming once clear waters into reddish-brownish sloshes and once pristine beaches into sandy graveyards for fish and dead marine life swept ashore by the tide that killed them. Fishermen stay home, vacationers stay away. Residents cover their noses when they step outside. They complain of irritated throats and eyes as they cough their way through a conversation trying to understand what went wrong.

Some will point out that in places like Sanibel on the Gulf Coast there have been red tides before. It is a cyclical event, they say, that occurs every so many years depending on weather. The difference is this time it is different. It has never been this bad nor has the recovery period ever been predicted to last so long, possibly until late fall or the end of the year. And while it persists, business bombs and life outside sucks.

If you think that is an exaggeration - and you still think it is about what is happening somewhere else, not to us here where we are blessed by ocean breezes and swift-running tides - you may want to reconsider.

There is no such thing as an isolated environment. Climate change affects all of us. The warming of the waters that created an algae bloom in China is the same condition that caused an algae bloom in West Florida. The rising sea that already took 20 feet of beach in Grand Bahama threatens all.

Former Prime Minister Perry Christie recognised the danger and seemed to take it seriously. Scientists have warned that as much as 80 percent of The Bahamas could be underwater one day. Save The Bays Chairman Joe Darville has said every school child should be taught to swim and boat building should be revived. One day, he said, long after he is gone, his descendants will survive by adapting to life at sea and islands will be sought after refuges.

The reason the image of the lake in China was on the front page of the New York Times is because the same issue of that newspaper contains an historic 70-page document on climate change. The editor’s note calls it “a masterpiece of narrative journalism”. It is the kind of work that explains why we still need print media and no electronic version will ever fully substitute for the dedication and quality of a seminal piece like this.

Written by Nathaniel Rich, it is based on more than 100 interviews over an eight-month period plus digging through thousands of pages of documents. Photographer George Steinmetz spent a year shooting the startling images, like Deception Island, Antarctica, where ice is melting at an alarming rate, the average temperature has increased five degrees and the penguin population has declined by 40 percent in less than a decade.

An aerial of Bangladesh shows a displaced, wandering population after the worst monsoons in 40 years submerged about a third of the country, demolished or destroyed 700,000 homes and forced 375,000 people into emergency shelters.

What the author uncovered was that scientists knew all there was to know about climate change as far back as 1979 and we had one decade in which to change our behaviour. And we blew it.

We continued to burn fossil fuels. It was as simple – and as complex – as that.

So long as we continue to use coal, gas and natural gas and as more countries demand more of the good life including electricity that relies on fossil fuels, the more we will warm the planet. And the hotter the planet becomes, the more likely it is we will face greater weather consequences, more powerful storms, severe flooding, extended drought or rainy seasons. Each of those scenarios carries its own consequences – the decline of populations of marine species, greater reliance on artificial growth hormones to produce sufficient stock for our endless appetite for meat and poultry with declining areas of natural grazing in temperate weather.

Unbeknown to most of us, in the decade between 1979 and 1989, the world’s major powers came this close to signing binding agreements that might héave allowed the world to avoid a climate change crisis. According to Mr Rich’s piece, we have never been as close to reaching an international alliance since and our habits that produce what we first called the greenhouse effect have only become more entrenched.

But there is some reason for encouragement and that reason is right here in The Bahamas. It comes in small packages and gentle waves. Most restaurants in Nassau only provide straws upon request. More dining establishments and feeding programmes have switched from Styrofoam take-out boxes to vegetable-based, paper-like products. That may not sound like much but considering the feeding programmes alone dish out more than 25,000 meals a week, ridding the dump of that amount of Styrofoam - which emits toxic fumes when burned - is more than a statement. It is a substantive quality of life improvement.

By contrast, I was just in Florida for a few days and noticed every glass of water requested or iced tea or coffee came with a straw. When I asked about it, a server looked at me as if I came from Mars instead of The Bahamas. Styrofoam was everywhere. The Bahamas was ahead in the small stuff of environmental sensitivity.

Florida, though, was way ahead in solar. Entire schools and shopping centres are powered by the sun. So if we can achieve progress with the small stuff, why are we not applying ourselves with equal lust to renewable energy? That is the real question and the dilemma that divides where we are from where we need to go.

For every problem, we believe there is a cure. Someone just needs to find it, hiding in a closet somewhere. But there is no cure lolling about in a closet for climate change We have come too far and to add to the tragedy or reality, we have become numb to it. Climate change was never sexy and the more we heard about it, the more we figured scientists must be working on it. They would never let it get out of hand.

Or do they have a choice?

The cover of the New York Times magazine is all black. Across the middle in white font is the lettering:

Thirty years ago, we could have saved the planet.

Maybe we cannot save the whole planet but each of us can help do our part at home. If a single straw does not make a difference, what broke the camel’s back? And if you do not think we can do this with one solar panel at a time, consider the alternative. At the rate the planet is going, according to the same historic work, between 2030 and 2050, 250,000 people a year will die as a result of climate change and by 2050 a million species will face extinction.

This government and all previous governments could care less about clean energy and specifically going solar. I live in a southern family Island and the red tape to install a grid tie system is ridiculous. Then we are severely restricted in the size system we can have. The best that I can hope for is a 4KW system because of assine rules. I want to install a system large enough to cover my entire energy needs. BPC has these rules in place to prevent this, so they would rather have a barge bring in dirty oil with the possibility of an accident rather than let me power my home entirely off of clean energy. Any excess power generated and put back into the grid only credits the homeowner with the fuel charge amount. All of this is to subsidize a corrupt, inefficient government owned power company. If the govt is serious this needs to change tomorrow.

Don, the way the system works is that the wealthy (who could afford to install solar) subsidize the poor. Collection rates from the poorest neighborhoods in Nassau are probably in single digits, although they never break that down in official figures. If they allowed solar to thrive, BEC would go bust in months as everyone who is now paying their bills would install solar and owe them next to nothing each month. Their cash-flow would collapse and they probably could not even afford to buy the oil they burn. Politically, that is unacceptable. But so is turning off the power to 50% of the population for non-payment.

These are serious political problems to grapple with and I feel for the government and BEC. They are truly stuck between a rock and a hard place. Therefore do not hold your breath. It will be decades before they sort this out, I am afraid.

Proverbs 23:9 Do not speak to a fool, for he will despise the wisdom

Don Anthony is right, and the real question is, Where is URCA? Are they not the Regulator? How is it that BEC/BPL wether Government owned or Foreign owned (pending) is determining policy? If Vested interests are going to determine policy, will the policy they create ever negatively affect them?

Thanks for the article Diane. Climate change is an historic battle for mankind. Our grandkids will be studying it in school and asking us what we did to combat it. For me: Hybrid car, energy efficient appliances and A/C units, recycling all plastics, cans and (beer) bottles and lush vegetation, led lightbulbs and solar security lights.

Our biggest bugbear is Recycling! No island has a successful program in place but let's keep trying to do the right things. Our children will thank us.