Insight: More Than A Case Number - The Families Fighting To Save Their Homes

In the ongoing battle between the government and human rights activists over the threatened demolition of shanty towns too often the individual stories of the families involved are forgotten.

Today Insight throws a light on those stories. As the legal battles play out in court these families can only pray that the homes they’ve shared for decades won’t be reduced to a pile of rubble.

These are some of their stories taken from the legal action filed in their names. 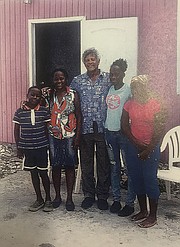 Fred Smith with the Nonord family.

Elisnor, 49, his wife Lumane, 47, and their four children (two minors Taliah, 13, and Lukenson 10, and adults Dahene, 23, and Geno, 21, live in their home in the Cowpen shanty town. They are all of Haitian ethnic origin. All of the children were born in The Bahamas.

Elisnor, Lumane and the two children are permanent residents. Dahene is a Citizen in Waiting. She has been waiting for nearly five years for her registration as a citizen to which she is entitled. Geno has been registered and is a citizen of The Bahamas.

Elisnor and Lumane built their home in 1986. In 2012 it burnt down in a fire. They had plans drawn and rebuilt and applied for a permit.

Recently the day that Notices were served at their home, BPL disconnected their electricity even though they were not in arrears. With the help of Callenders (law firm) BPL reconnected them later that night.

They have been served with the June and July Notices. They have also been served with a notice from BPL. They have nowhere else to move to. Elisnor and Lumane have lived on the land since 1986 and their children all their lives. They are very scared of having their home  and belongings destroyed. They are terrified of being made homeless. They have nowhere to put their personal belongings and all their furniture and appliances. They value their home at $50,000.

In July 2011 Mr Justilien, 43, leased the farm land that he built his home on from Mr Green. His annual rent of $600 is paid up to July 2019. He lives in his home with six other family members, his wife and children. He is a citizen of Haiti and has a work permit. He has also been recently approved for permanent residency.

When he started building his home on the leased land, he was served with a notice by the Ministry of Works which advised him to stop and “Come to the office and see us tomorrow morning and see us at 9.30am.”

He did so. As a result he had “Low Cost Housing Drawings” done by Ellie Major. He paid for and obtained a building permit. Permits are stamped on his plans. He proceeded to build his home for himself and his family.

The Notices were posted on his home. He and his family are very concerned that the government intends to destroy their home. Their home is fully furnished. They have nowhere else to go.

Mona Murat-Aginor, 36, is a citizen of The Bahamas. Her parents are from Haiti. Her husband Enel, 54, is also from Haiti, is a permanent resident. They have four children, all citizens of The Bahamas ranging in ages from 10 to 17. They all live in their home.

They lease the land from Mr Basil Butler. In 2002 they were given a permit to build their home. The plans were also stamped and approved by the Department of Environmental Health Services. It is worth $120,000 and the furniture and appliances another $25,000. They have a utility agreement with the WSC. Likewise with BPL.

They were served with the Notices. They are in shock and are very frightened about the threat of destruction of their home and belongings.

Veronica is a 70-year-old woman. She is a citizen of The Bahamas. Her parents were citizens of Haiti. She has been issued with a voters card by the government showing her address. Her home was served with the Notices.

She has nowhere to go. She is afraid of being  put out on the streets and made homeless. She says she is very scared.

Mr Clarke is now 58. He worked at the Ministry of Agriculture in 1993. He applied for a crown grant. He was told that the government had approved his application. Mr Hughie Williams, who was in charge of the land unit, told him this. He was given permission by Mr Williams to move on to the land.

Mr Clarke moved on to farm the land which he now occupies and made into his home in 1993. There was already a small home there. He has made many improvements and expanded it. It was originally farmland. There were no subdivisions or housing developments around there as there are now. Over the years more and more farmland was taken up and used for housing developments and came right up next to his land.

He needed farmworkers and hired Haitian workers. It was convenient for them to live on the farm. He began to rent portions of the land to these workers and allowed them to build homes on the land, charging modest annual rents of between $300 and $500 a year.

He has often chased his application for the Crown land. He fully expected to pay for it at some stage. So, one of the other reasons he also rented plots to the workers was to begin to save up funds to pay for the land.

He eventually leased out 17 plots on which homes have over the years been built. There are many substantial homes on the land. It is a small closely knit community. They are afraid of having their homes destroyed. They do not wish to move out. They regard themselves as tenants. They have been paying rent regularly to Mr Clarke. They do not wish to move to Over-the-Hill. They say it is full of crime and drugs. In their community they look out for each other and their children and older folk are safe and looked after.

Most of the people are either Bahamian citizens or have permanent residence or work permits. Regrettably, they say the immigration, defence and police still periodically carry out raids and cause a lot of disruption and anxiety.

She is a permanent resident of Haitian origin. She is 40 and built her home in 2008 and has lived there with three others for ten years. It is worth $40,000.

She has a building permit and approved plans yet she was served with the Notices. She is terrified. 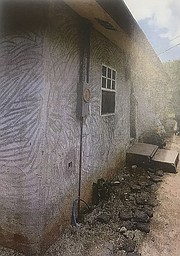 She is a citizen of The Bahamas, aged 33. She has four siblings born in The Bahamas. Her brother Louvince lives with her. He is autistic and has epilepsy. He applied when he was 18 to be registered as a citizen. All of her other siblings are citizens. She has eight people living in her home ages ranging from an eight-month-old baby to her mother, 59.

She has been served with the Notices yet she has a building permit.

They have nowhere to go. They are very scared and anxious that their home will be demolished and are terrified.

Beatrice Altidor and her family.

She is a 29-year-old citizen of The Bahamas of parents from Haiti. She was born in Abaco. Her husband has a spousal permit. She has two children born in The Bahamas, Raquel, nine and Celine, three.

She purchased her home for $4000 and has spent more funds improving its value. She has a WSC account and has been paying her bill every month of $60.

She has a voters card with her address as Pigeon Peas shown thereon. She and her family have nowhere to go. Housing is very scarce in Abaco. She is afraid for the security of her family.

Government officials recently visited the community and have on two occasions placed numbers on her home. They did not explain whey they did this. This has caused her family a lot of stress and anxiety. They are afraid they have been targeted for demolition.

The Bahamian passport of Manita Philistin.

They have lived at their home for 15 years. The number 143  was recently placed on her home. She is afraid it means that it is identified to be demolished. She says if that happens they will be homeless. She is scared.

The Linwood Clarke family: Golden Isles. - "He began to rent portions of the land to these workers and allowed them to build homes on the land, charging modest annual rents of between $300 and $500 a year." My boy is a developer not a farmer. I wonder how much farm land is left or is it all houses now?

Veronica Francois: Bedrock West - "She has lived at her home with her family since 1900". She's the oldest woman in the world I think... 118 years old!

I hope that if I ever need an advocate for "grace" from my debtors I din't have Mr. Smith for an advocate. . .that man is as diplomatic as a raging bull. He is trying to talk for pity and say follow the law and at the same time showing papers that demanded that the holders followed the law. . . he is leading this situation that he might get another situation like it did in the Dominican Republic. . . the people took the law into their own hands and exact vigilant Justice because UHRC giving the government trouble! Hundred of thousands of Haitians. . .those entitled to citizenship and those who were not. . . were all chased across the border and some killed.

This man will lead his people on both sides of this mess to hate each other. . .he is mentally slipping. . .Donning Kruger syndrome. . .he is going to cause a dangerous situation in this nation. . .he cannot reason!!

So now we are supposed to feel sorry for Mr. Smith's countrymen ??? If he is so concerned about his fellow Haitians, then he needs to pack up his Haitian loving, wealthy ass back to Haiti and fix their problems at home instead of trying to make the Bahamians fix their problems when we say thet gotta go !!! Fix the problem at the source not here !!!

Has anybody noticed that you never hear from Fred Smith unless a Haitian is involved !

The Government and the media is giving this Freeport Haitian way too much attention.

@rawbahamian, I totally agree with you.

Sounds like the outspoken QC needs to sue the people that “sold” crown land to these Haitians. If it is their own land that they sold to the Haitians, then all involved should suffer the same consequences as anyone else that sells or builds without following proper protocols. Or is this a warning to the elites, politicians, and real estate lawyers to push for lawlessness for Haitians or risk being outed as thieves and slumlords? These people need to put their belongings in storage and focus on rebuilding their lives correctly. Many Bahamians and others had to do just that.