Only One School Late For New Term 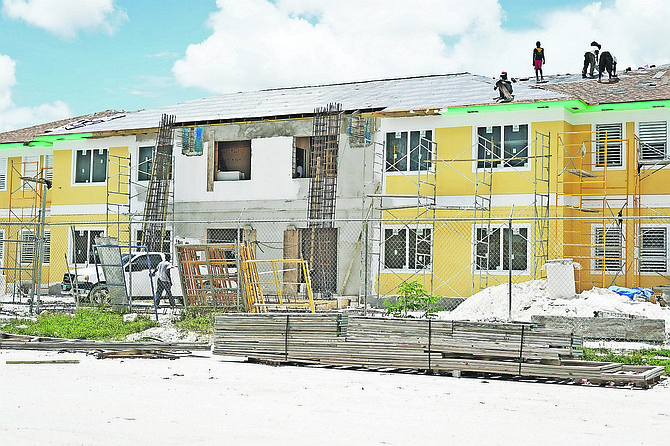 GOVERNMENT officials suspect that only one public school - the Eva Hilton Primary - may not be ready on opening day come next month.

Arrangements to accommodate students of Eva Hilton have not been finalised, but Mr Lloyd said it is expected they will be accommodated at the Kendal Isaacs Gym.

Eva Hilton is a new school. CH Reeves and Thelma Gibson Primary School also underwent major renovations this year, with the former receiving as many as eight additional classrooms.

“It’s critical that they be ready because those schools have suffered a deprivation of capability over the last few years,” Mr Lloyd said.

It will likely be tough for the AF Adderley Junior High School to be ready for opening day next month as well, but students have not been there for three years as that school undergoes extensive renovations.

Mr Lloyd said: “We have been fortunate that a number of our contractors have been able to mobilise themselves without the mobilisation sums from the Ministry of Works, the Ministry of Education and the Ministry of Finance. In some instances, those works are just about near completion. In other instances where there are smaller contractors dependent on that mobilisation funds, they have assured us that despite this three or so weeks before school opens up in earnest that they are still going to have school ready on opening day.”

School repairs this year will cost about $7 million.

"School repairs this year will cost about $7 million".....plus or minus a few Disney World day passes. Don't worry about the details Mr. Public - we could publish them online and filter out non-Bahamas IP addresses - but we won't. We just won't.

And if needs be more simple they would just throw two words at the public; "we won't".

Why does this suffering of.... "deprivation of capability over the last few yeats" ....or ......why does people slunking ......wid school repairs.....have to be revealed it seems every year dat dese gubbermint schools needs major strictural fiximg ups......???.......why not have the Maintenance person at every school or schooll teacher.......takes a picture of da structural problem....and whats zaspp it to da Gubnerment Buildings repairs.....an deys can comes in da afternoons, set up and works after 3 oclock ....weekemds....an fixes da problem....??? Isnt dere a gubbermint Buildings Maintenance repairs Department...???t....Or...,, is and must all repairs be by contract.???......after when it done gets real dead bad....repairs needed done broke down???

Your suggestions are just too sensible for those in charge!

Has the Minister of Education inform the Bahamian people of the BJC and BJCSE performance results in the recent 2018 exams???? ............ Or is the physical plant more important??? All of the big scholarships have already been given out ....... and still not a word on the results.

It is the chicken or the egg, we suppose. What is the reason for the silence???????