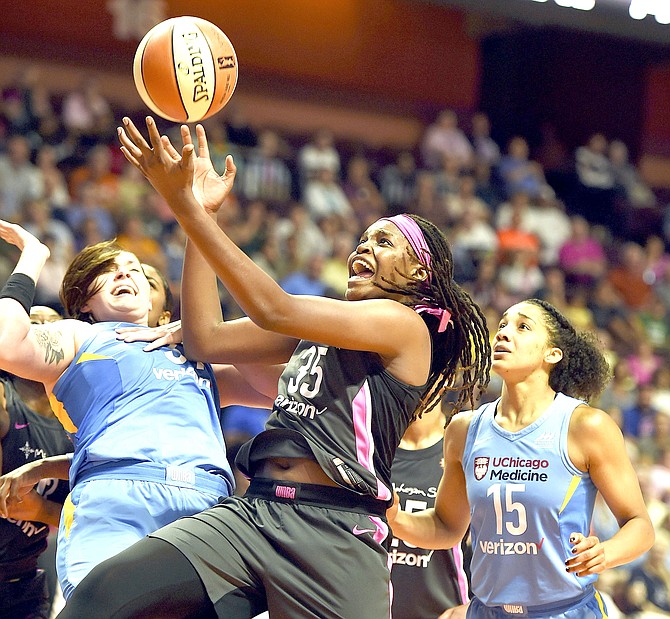 Jonquel Jones recorded her first double-double of the season as the Connecticut Sun continue to wind down the regular season and continue their playoff push.

Jones finished with 17 points and 15 rebounds in the Sun's 82-75 win over the Chicago Sky August 12 night at the Mohegan Sun Arena in Uncasville, Connecticut.

It was the second matchup between the two teams in three days, following Chicago's 97-86 win on August 10 at the Allstate Arena in Chicago, Illinois.

With their sixth win in seven games, the Sun (18-13) clinched back-to-back winning seasons for the first time since 2011 and 2012. They also pulled Connecticut even with Los Angeles for fourth place in the WNBA playoff standings.

After she posted just four points and four rebounds in the first half, Jones dominated the post with 13 points and 11 rebounds. At the end of the third quarter, Jones had a late scoring flurry with three field goals in just over one a minute.

"A lot of times I was in a 3-point shooting position I just get back and try to stop whoever is coming down, but (today) I just felt like going to the rim," Jones said to the New Haven Register, "Our energy was lacking when we played them (in Chicago) and we felt it was something we could control and be better and we'd be able to come away with the win."

Jones' efficiency on the boards led the Sun to finish with 21 offensive rebounds, and tie for the third-highest total in franchise history. They also had a season-high 51 rebounds, tied for third-most in team history.

Connecticut trailed 38-35 at halftime and were down 42-40 three minutes into the second half. They went on a 22-4 run over the final 6:41 of the quarter and Jones produced nine points and four rebounds during the run.

The Sun will be home again tonight, hosting the Dallas Wings at 7pm.

Connecticut have three games remaining in the regular season, including the finale against the Sparks on August 19, which could be a pivotal matchup for playoff seeding.

Since the 2016 season, the WNBA implemented changes to playoff seeding and qualification procedures as well as the postseason format. Under the new postseason structure, the eight teams with the highest winning percentages regardless of conference qualify for the playoffs and are seeded based on their record.