'Trust Us' Says Minnis - But Wait For Hotel Deal Details 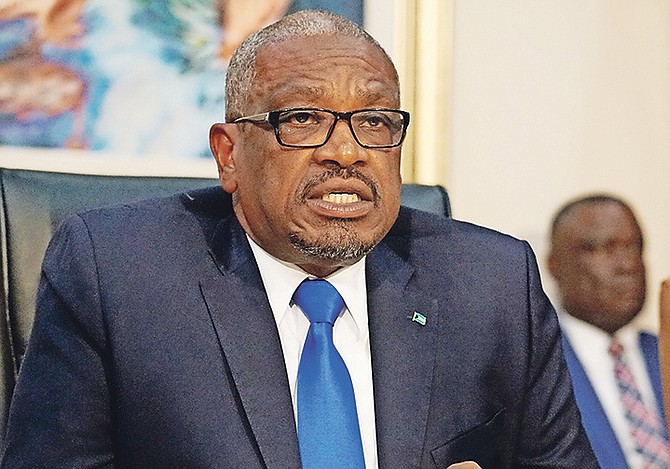 FULL disclosure of the proposed Grand Lucayan deal for Grand Bahama will not come until the purchase is complete, Prime Minister Dr Hubert Minnis said yesterday.

Despite this virtually meaning the details will be shielded from public view until such time, the prime minister insisted Bahamians are owed transparency when it comes to the terms of the government's intended purchase of the resort.

Dr Minnis admitted he believed governments should not get involved in the hotel business, but he contended certain factors made the option the only viable one.

Asked what assurances he could give to the public over the protracted nature of these negotiations, Dr Minis said: "They can trust us."

He also said: "I will enunciate the entire procedure to the Bahamian populace.

"I think they are owed that and that's transparency and reporting to the nation so I don't want to say much about it because everything is still ongoing.

"Grand Bahama in particular will get a complete report and just as I've gone through the Family Islands and explained certain things to them, the entire Bahamas will be told how we go to this particular point and where we intend to go."

Press Secretary Anthony Newbold said earlier this week the government will have to revamp its fiscal projections with its purchase of the Grand Lucayan resort, conceding that buying the hotel is akin to dealing with the aftermath of a major hurricane.

"It has to revise its fiscal projections and all of the expectations that it had," Mr Newbold said. "As you said, it's been likened to a hurricane. That was one of the things the minister of finance said, 'Please God, don't send us a hurricane.' Everything is going to have to be revamped and looked at in those terms.

"This is something the government didn't expect that it would have to do. There's this hotel that's sitting out there, a couple thousand people not working, we got to get involved so the government gets involved. Prime minister said we got to buy this hotel, well everything that goes with that now has to be factored against what was planned for the fiscal health of the nation over the next several months."

Since coming to office in 2017, the Minnis administration has embraced austerity measures, slashing budgets for government ministries by ten percent and raising value added tax to 12 percent.

During the budget debate, the government emphasised its three-year fiscal consolidation plan that would result in a gradual reduction of the deficit.

"We are one hurricane away from total disaster," Deputy Prime Minister and Minister of Finance Peter Turnquest said earlier this year as he defended the VAT increase.

On Tuesday, former Tourism Minister Obie Wilchcombe said notwithstanding the cost of purchasing and renovating the Grand Lucayan properties, it could cost more than $60m a year to operate them.

However, he said removing the current owner, Hutchinson Whampoa, provides a good opportunity for the government to act as broker and find either operators or a private buyer for the resort.

As for the $65m resort price tag, he said granting Hutchinson Whampoa a tax holiday is an option in the government's tool-kit that could considerably lower the purchase cost.

The Hutchinson Whampoa group, a highly profitable Chinese conglomerate with a very deep pocket, had to be given all kinds of exceptionally generous concessions by the Bahamian government as an inducement for them to invest in Grand Bahama. And the moment the tourist market got soft they just threw in the towel, using a hurricane as a good excuse to cut their losses. Now the Hutchinson Whampoa group wants the dimwitted Minnis-led FNM government to buy the Grand Lucayan for an exorbitant price of not less than $65 million, wants the Bahamian people to bear the hotel's operating losses that could easily exceed $60 million annually, and also wants even more concessions for their other businesses in Freeport in exchange for the privilege of royally screwing all Bahamian taxpayers in a senseless dead hotel transaction Minnis and Turnquest may be fool enough to undertake. Surely Minnis and Turnquest can't be that stupid! But if they are, it begs an entirely different question - What's in this hotel acquisition for them personally, and their cronies?!

doc wants the Bahamian people to TRUST him. like when he said VAT was bad. and at his first opportunity he increases it by 60% TRUST you doc like the OBAN deal you signed then signed a fake deal for the press later, and can the Bahamian people forget all you uproar regarding BAH MAR. Trust you doc.

Only a fool puts their trust in man especially one as yourself a masterful liar indeed.

enjoy your conch stew . and how soon will you be going to BAiNS Town to cut your birth day cake.