Sun Blazing Hot As Jones Heads For The Playoffs 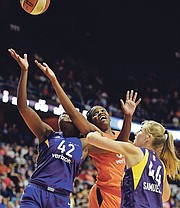 Jonquel Jones and the Connecticut Sun will enter the WNBA Playoffs as one of the league’s hottest teams.

The Sun concluded the regular season with an 86-83 win over the Los Angeles Sparks yesterday at the Mohegan Sun Arena in Uncasville, Connecticut.

With their fourth consecutive win, the Sun (21-13) clinched the No 4 seed and a first-round bye in the playoffs. They will host a second-round game on Thursday, August 23.

Jones finished with one of her best all-around games of the season in the finale, 17 points, nine rebounds and a season-high seven assists. She shot 7-11 from the field and 2-3 from beyond the arch. She finished one rebound shy of a third double-double in the last four games.

During the four-game winning streak, Jones has averaged 21.8 points, 9.8 rebounds and 2.8 assists per game on 70 percent shooting from the field and 67 percent from three-point range.

Her hot shooting continued from Friday’s 96-79 win over the Minnesota Lynx when Jones finished with 26 points and five rebounds. She equaled her career high with five three-pointers made.

The Sun swept the season series against both Minnesota and Los Angeles.

Connecticut led the WNBA in both scoring average (87.6) and rebound average (37.00 per game), ranked second in field goal percentage (46.5 percent) and third in three-point percentage (36.2 percent).

Jones was second in the league in three-point percentage (46.2 percent).

Jones missed both training camp, the preseason and was a late addition to the team after awaiting paperwork at home this offseason. She eventually reported to the Sun just one day before the regular season tipped off.

She finished her third WNBA season with starts in 16 of her 34 appearances. She finished with averages of 11.8 points and 5.5 rebounds per game this season.

The eight teams with the highest winning percentages regardless of conference qualify for the playoffs and are seeded based on their record.

The Sun also finished 2017 regular season with a record of 21-13, second in the Eastern Conference. They lost to the Phoenix Mercury in the second round of the playoffs.