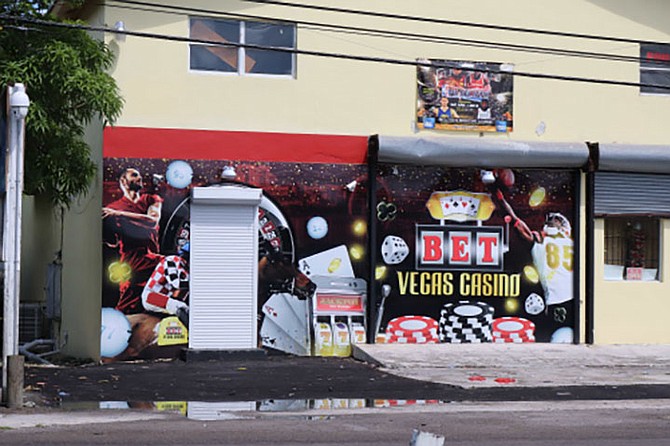 Licenced operators, speaking on condition of anonymity, told Tribune Business that Bet Vegas - the only web shop chain whose licence application was rejected when the sector was legalised in 2015 - was not only still operating but now expanding to eight locations with the pending opening of a new site in the Carmichael Road area.

They argued that Bet Vegas was expanding in anticipation of enjoying a competitive advantage when the 5 percent levy on gambler deposits and over-the-counter lottery sales takes effect on September 1, as itself and other unlicensed operators will not have to impose it.

As a result, licensed operators believe their concerns that increased web shop taxation in the 2018-2019 Budget will create an expanded gaming “black market” are about to come true, taking the sector back to its pre-regulation days when it was viewed as “high risk” of being abused for money laundering and other financial crimes - thereby threatening the Bahamas’ international reputation.

This is especially since the Gaming Board and law enforcement authorities have, to-date, failed to take effective action to close gaming houses allegedly operating without a license. Tribune Business can reveal that the Gaming Act passed by the former Christie administration only empowers the regulator to take action against licensed operators - not illegal ones.

The Gaming Board thus has to rely on the Royal Bahamas Police Force to act on its behalf against unlicensed companies, and correspondence obtained by this newspaper shows this arrangement has proven ineffectual to-date.

But Anthony Brown, Bet Vegas’s president, yesterday blasted back at criticism of his ongoing gaming operations, telling Tribune Business: “We lost everything; why are they now concerned?”

He argued that the web shop chain had been “wrongfully and illegally mistreated” over the rejection of its licence application, which resulted in Bet Vegas initiating a Judicial Review action in the Supreme Court in 2015 to challenge the Gaming Board’s decision. It also obtained an injunction preventing closure of its business until the case was determined.

Mr Brown yesterday declined to comment on the status of the Judicial Review action, or whether the injunction preventing closure of the business remained in effect, as did a Gaming Board spokesman.

“You have these [unlicensed] guys expanding to take advantage of the patron tax and the Government is doing nothing,” the source said. “They’re going to cause us to lose money to the black market. If they’re going to increase taxes on us they’ve got to enforce the law.

“The patrons are loyal to no one. They go to where the best deal is. They are loyal to the deal; no one but the deal. When the Attorney General says they’re digging them [unlicensed operators] up, this is not underground; it’s above ground.

“When you tie all that together they’re taking us back to pre-regulation. We stamped that out, but now they’re making the regulated market less competitive than the black market.”

They pointed to the study by Gavin Hamilton, the analyst hired by the Association, which warned that the increased web shop taxation rates “will be offset by a large migration of customers from the regulated market to the untaxed, unregulated market. We estimate the market will decrease by up to 30 percent”.

And the source also pointed to the June 10 letter sent to the Prime Minister by Calvin Wilson, the immediate past executive director for the Caribbean Financial Action Task Force (CFATF), which warned that The Bahamas could face renewed anti-money laundering sanctions if the web shop industry was driven “underground” by its new tax structure.

However, Mr Brown counter-attacked: “Other operators should not be jittery about Bet Vegas. We have been the operation that was wrongfully and illegally mistreated since the process to regulate the industry started back in January 2015. Why are we now of any concern to them? While we were being attacked in the media, they were celebrating our collapse.”

He added: “While we were tied up in court, going back and forth, they were expanding. While our vendors were being threatened by the then-Gaming Board to end our service contracts, they were signing up exclusive contracts with those vendors. Other operators have reaped the benefits of all the underhanded misfortune served upon Bet Vegas. So why are they now concerned?”

Mr Brown reiterated that he will continue to fight to defend his name and professional reputation, adding: “Your name is all you have, and that is even more important when you do business elsewhere. I have been in the financial services industry for 12 years in the US. This whole saga has affected my livelihood. I’m not going to sit back and let my work be destroyed.”

A Gaming Board spokesman yesterday confirmed that the regulator is unable to act against unlicensed operators by itself, and has to rely on the Royal Bahamas Police Force to act on its behalf against them.

“The Gaming Board under the Act only has the authority to enforce regulations on licensed premises,” they said in a statement to Tribune Business. “Under the Act, the police have sole jurisdiction over unlicensed gaming premises.”

Without naming any operator, they added: “The matter has been reported to the police on numerous occasions. If the general public is aware of any illegal premises we would be appreciative if the matter is brought to our attention so we can forward the same to the Commissioner of Police.”

Documents obtained by Tribune Business show the Gaming Board become increasingly frustrated by the reluctance, or inability, of the police to close Bet Vegas down despite the regulator’s multiple proddings.

A November 3, 2017, letter from Bridgette Outten, the Gaming Board’s acting secretary, to police commissioner Anthony Ferguson reveals that the regulator requested assistance six times in 2015-2016 for assistance “to effect the closure of Bet Vegas’ illegal gaming operations” without success.

It is unclear whether the ongoing Judicial Review and related injunction made the police reluctant to act, but Ms Outten wrote that “the situation involving Bet Vegas continues to become problematic”.

She added: “Bet Vegas has not only expanded its business operations throughout the Bahamas, but the Board has been advised that representatives from the company have contacted one of the Board’s independent testing laboratories in order to have the gaming platform that Bet Vegas currently offers tested and certified as being compliant with the Bahamian technical standards enumerated in the Gaming Act 2014 and Gaming Regulations 2014.

“This is clearly an egregious act as Bet Vegas is not a licensee of the Board. Accordingly, Bet Vegas’ actions demonstrate a blatant disregard for the gaming legislation that governs this jurisdiction. To this end, the Board implores the police force to take action and enforce the closure of all Bet Vegas locations.

“We trust that you can appreciate that Bet Vegas’ continued illegal operations pose a reputational risk not only for the gaming sector but for the entire country.”

Bet Vegas continues to operate today, with Tribune Business provided with a receipt from the web shop chain dated yesterday. With the Minnis administration yet to overturn the 10-year block imposed by its predecessor on new web shop licences, it appears unlikely the company has obtained one.

Tribune Business also obtained a September 12, 2017, letter from Ms Outten concerning a Gaming Board probe into a company called Umbrella Ltd, which “appeared” to be “selling and distributing scratch and lottery cards without any form of authorisation” from the regulator.

She called for the launch of a “formal investigation” by the police into the Gaming Board’s findings, and “steps taken to enforce the closure of Umbrella Ltd’s unauthorised business operations. In the circumstances we implore the Royal Bahamas Police Force to assist us by acting swiftly to ensure that all of the locations are closed”.

The letter described the K-Souse Restaurant on Blue Hill Road, “adjacent to Bahamas Power & Light”, as Umbrella’s headquarters with the restaurant’s Poinciana Drive site serving as the “ticket redemption centre”.

Tribune Business research showed the Umbrella Ltd website and Facebook page referred to in Ms Outten’s letter were still active as of yesterday, although there appeared to be no postings to the latter since December 2017. The Facebook page contained a link showing the location of 20-25 “scratch and win” retailers, who are a mix of food, convenience and liquor stores, bars and beauty retailers - all high-traffic areas.

Umbrella Ltd’s website showed the company as having a Shirley Street address, but the contact number was permanently engaged when Tribune Business attempted to call multiple times.

What a mess Christie created!! Gaming houses on every corner whether licensed or not licensed is bad for the Bahamas. These so called "business" men need to take their new found fortunes and help the government with the GRand Lucayan and to bring in tourist dollars instead of rapping Bahamians of the little they have with these web shops

Just ship their profits out of the country!

Like the other businessmen in the country the government actually supports! (foreigners)

as your handle states Bahamas for Bahamians.. it is not time for Bahamians to step up to profit from tourist and receive concessions like the foreigners?

Legal of illegal the web shops are making millions from Bahamians. All this does is continue to rape the poor. We need to start owning the Baha Mar and Sandals resorts.

LMFAO! Illegal web shops still operating AND expanding! Love this corrupt, anything goes, country of ours. Now you're going to get the old, now regulated, numbers criminals complaining that the new numbers criminals are breaking the law. Ha!

We gat all kinda mouth now that we legal and when there was an outcry to shut them down for years while they were operating "illegally" nothing was done. So now that they gat some "illegal" competition and it's now an issue????

Well Hubert Ingraham made them "legal", coining them by the term "webshops" and authorizing the government to issue their business licenses.

Silly Christie regulated their activities that was in the gray area Ingraham created.

Be smart before you be political you'll end up the fool. -Quoted by no politician ever.

Kiss my opinion - said no one ever!

The muppet numbers guys weren't complaining when they were operating illegally but now they object to the double standards. Shame!

I don't know why the government doesn't shut it all down and have a national lottery, at least the proceeds can be used for healthcare and education.

It's all about the money, not the people. Web shop owners, politicians, same difference, it's the money.

AWARD THE NATION MEDAL OF HONOUR TO TRIBUNE FOR RESEARCH INVESTIGATION SHOWING THE FOREIGN MONEY PEOPLE THE TRIBUNE HAS THE COUNTRY MONEY BUSONESS UNDER STRICK OVERSIGHT BUT THEY NEEDS THE POWERS TO ARREST.