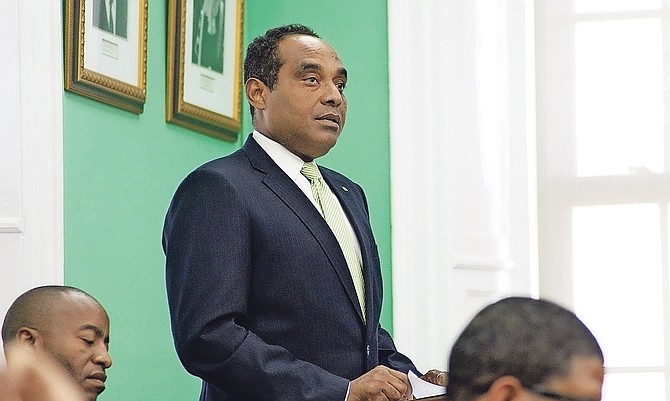 CABINET is close to reaching a conclusion that could increase the country’s aragonite mining revenue, Environment Minister Romauld Ferreira said.

However, he cautioned that aragonite was not a “panacea” that would make every Bahamian citizen rich, as some believe.

He said his ministry received an economic report on the matter earlier this year which the Minnis administration has been analysing in conjunction with key geological reports conducted in the past.

Through a lease with Sandy Cay Development Company to mine aragonite off Ocean Cay near Bimini, the Bahamas government reaps a royalty of $2 per metric ton.

Some have long believed the country could make much more.

He said this could only happen if the country embraces the right extraction policy for the mineral, one “rooted in science”.

“Again it’s not a panacea, a silver bullet that will make every Bahamian a millionaire, but the amount of money that we as a country, as a nation make from it can be increased,” he said on Wednesday.

“The first thing is we had a geology report that was prepared, more than one actually, initiated by the Ministry of Environment and also the Ministry of Agriculture and Marine Resources because when you really consider it, aragonite really precipitates out of the ocean so it really is a marine resource. What we learnt about the creation of aragonite is that in a human lifetime it is not renewable. I mean when they did geological sampling, they used carbon-14 to date something. They determined the aragonite in the Bahamas, there are different patches of it throughout the country and it has different rates of formation, anywhere between 150 years and 200 years for one grain to precipitate out of the ocean.

“So what we want to do is to make sure that our policy on aragonite is grounded in science so that the extraction rates are sustainable. One thing is for sure, the studies say there are millions of tons of aragonite scattered throughout the country. Fourteen principle locations around the country were sampled. Those locations secrete aragonite at different rates. That being said, there are millions and millions of tons of it, just that the rate that it precipitates is not as fast as you might think. So we have to be very careful how we manage the resource.”

Mr Ferreira said legislation is being developed to establish a new regime for the substance.

He made no mention of the thousands of tons of aragonite being extracted at the fishing hole road in Grand Baham on a daily basis!

No. They dig up limestone fill and aggragate at Fishing Hole road everyday. Sheesh you aragonite people could make stuff up...

Why doesn't this clown just tell us who owns the Sandy Cay Development Company and which of our PMs granted them the very lucrative lease they have been enjoying for years? And when does the current lease expire?

"What we learnt about the creation of aragonite is that in a human lifetime it is not renewable. They determined the aragonite in the Bahamas, there are different patches of it throughout the country and it has different rates of formation, anywhere between 150 years and 200 years for one grain to precipitate out of the ocean. So we have to be very careful how we manage the resource.”

Does this matter? And why should it matter now? Aragonite mining has been going on from the 70's. Since we are now aware of it's industrial uses it seems to me like they want to protect the market from competitors using this long renewable excuse as justification.