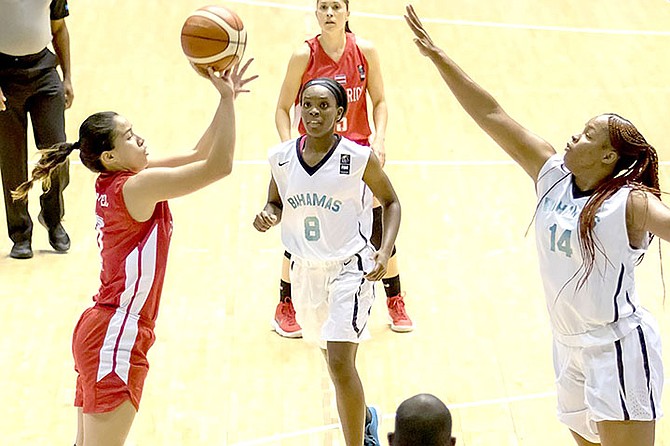 A late three pointer from Brea Forbes was the go ahead score for team Bahamas and led them to their first win over the 2018 FIBA Centrobasket Women’s Basketball Championships.

Forbes’ third three of the game gave the Bahamas a 58-57 lead with 51 seconds left to play and they held on with free throws down the stretch for a 60-57 win over Costa Rica Wednesday night in Manati, Puerto Rico.

The Bahamas will now advance to play in tonight’s fifth place game against the winner of the Guatemala and Costa Rica matchup.

Both teams shot about 38 percent from the field but the Bahamas produced 27 points off the bench while Costa Rica managed just eight.

Costa Rica jumped out to an early 8-0 lead before Neely made the first score for team Bahamas. They would rally to tie the game at 12 with 3:51 left in the first and Lewis’ jumper gave the Bahamas their first lead of the game on the ensuing possession. She added a three pointer just before the close of the quarter and gave the Bahamas a 17-14 lead at the end of the first.

A dominant defensive second quarter for the Bahamas propelled them to a 10 point lead. Neely and Forbes made back-to-back jumpers gave the Bahamas a 30-20 lead with 53 seconds left to play in the half. Costa Rica scored just eight points in the quarter on four field goals and the Bahamas led 32-22.

Costa Rica won the third quarter 19-12 to get back into contention. They opened with five straight points and eventually a Matamoros layup pulled Costa Rica within two, 34-32 at the 7:49 mark in the third. Jimenez made a layup just before the buzzer sounded and the Bahamas took a 44-41 lead into the fourth.

The Costa Rica run continued into the fourth and tied the game on a Natalia Galvez free throw, 44-44 with 8:23 left to play. They took the lead on the next possession when Jimenez made two from the line for a 46-44 lead. Costa Rica led by as much as six, 55-49, with just under four minutes left to play before Forbes made three pointers on three consecutive possessions. Her second three tied the game at 55 before Costa Rica moved back ahead on a Jennifer Sanchez jumper. Forbes’ final three gave the Bahamas the lead for good as they improved to 1-2 in the tournament. Costa Rica remains winless at 0-3.

“I feel good about where the team is sitting,” said coach Wayde Watson, who is being assisted by Varel Clarke-Davis and Anton Francis. “We play in the classification game tomorrow at 4 o’clock (Friday).

The tournament continues through August 24 and the top four finishers will qualify for the FIBA Women’s AmeriCup 2019.

The Bahamas is included in Group B along with Costa Rica, Puerto Rico and Mexico. Group A includes Guatemala, Cuba, Virgin Islands and Dominican Republic.