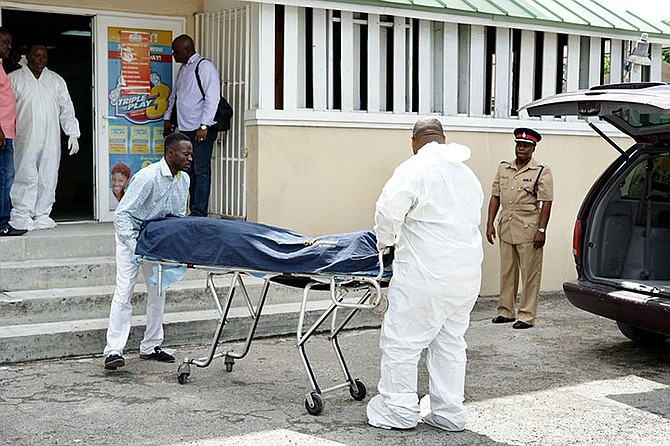 The body is removed from the scene on East Street. Photo: Terrel W Carey/Tribune staff

POLICE are investigating a fatal shooting that occurred at an East Street web shop on Friday morning.

The incident took place sometime around 10am at Everybody Wins on East Street and Balfour Avenue.

According to police press liaison Superintendent Shanta Knowles, a man entered the establishment and went inside the restroom.

Shortly afterwards, patrons heard a shot go off. The suspect left the restroom and approached another man who was described as a customer.

Supt Knowles said the suspect reportedly spoke to the customer before shooting him multiple times and fleeing the establishment.

The victim was confirmed dead. He is estimated to have been between 25 and 30 years of age.

Supt Knowles said both the victim and suspect are known to police.

“We are appealing to those who were in this business place at the time of this incident who have information to assist us with this investigation to call on our crime stoppers line or the Central Detective Unit or our 911/919 number,” she said.

Everybody Wins? I want to say more, but am unable to find the words.

Why in all these years so much can be investigated and brought to light....BPL executive have money to buy makeup....people flying to Macau...(chinese Las Vegas).....Oban.....ethnic close knit communities in shantytowns....BUT HOW COME ALL THESE OTHER POLITICAL TINGS GETTING FOUND OUT GETTING FOUND OUT.......AN....AN.....AN....AN.....NOT ONE SINGLE CRIMINAL GANG....OR PEOPLE SMASHED...OR CAUGHT BRINGING IN ALL THESE MANY ILLEGAL GUNS ....INTO NASSAU...,!!???