Bannister Tells Board: Set The Policy, And Stay Out Of Running 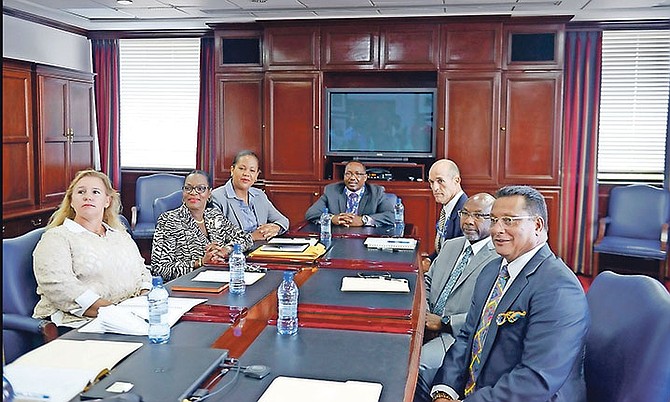 IN his charge to the new Bahamas Power and Light board of directors yesterday, Minister of Works Desmond Bannister told appointees their focus is to implement policy and not to interfere in the day-to-day operations of the electricity provider.

The new board gathered yesterday for an orientation session at a time when questions continue to linger regarding the circumstances surrounding the dissolution of the former board and a serious degree of allegations levelled from many sides.

Mr Bannister's comments were an apparent swipe at former board members, who he had previously accused of trying to get involved in the day-to-day functions of BPL.

The minister's own admittance last week that he interfered with ex-board members' work has also shed light on the degree of dysfunction that existed.

Nonetheless, when he spoke to the new board in the conference room of BPL yesterday, Mr Bannister sought to lay out a mandate, stressing the critical need for them to work together, suggesting the "immense" challenges present could become strenuous.

However, he was tight-lipped following these remarks and did not say much in response to several questions from reporters seeking answers to the many questions that remain.

Asked to respond to critics who rebuked him for "chauvinist" remarks and a call for him to apologise to ex-BPL chair Darnell Osborne - for his claims he interfered in a bid to block the company from paying her personal bills including make-up services and the installation of a home security system - he said: "The prime minister has indicated certain things and I will obey what he said. My only comment is the prime minister has indicated that he is investigating it and as his appointee I am not to say anything."

He had a similar response when he was asked by The Tribune whether he regretted making this statement and others.

Ahead of the new board's first meeting, Mr Bannister said there was a critical need for every member to work together, adding the government and the Bahamian people were counting on them to resolve BPL's issues.

"It's also important for you to remember that as a board your job is to implement policy. I want everyone to appreciate that your job is not to delve into the minutiae of operations.

"The CEO Mr Whitney Heastie, who is highly accomplished, he is going to report to you and a number of other people will report to you.

"If they are not performing in a satisfactory manner then there are things that you can do but you are not as board to seek to come into BPL and run the day-to-day operations that is within his portfolio, that is within his job description. That is something that he has to deal with and, in so far as he performs well, then you are the ones who will judge that and make the determinations."

Mr Bannister also told members they are to prioritise the Shell North America deal. As this agreement already has Cabinet approval, the minister said this was not something the board could change. However, he told members it was one month behind, so any work now should be focused on its memorandum of understanding.

"The government of The Bahamas has determined BPL/BEC will enter an agreement with Shell North America. That is not something that you can change. That is a Cabinet decision. Your job now is to seek as quickly as possible to enter into a memorandum of understanding with Shell. That was the Cabinet decision.

However, last week, Mr Moxey told The Tribune a review of the Shell contract was high on the agenda for its new board.

"Presently I have no position on Shell whatsoever," Mr Moxey said, after his appointment. "I have to learn what that is. As far as I know, there was a RFP (request for proposals) that was put out, a process was followed and as far as I know Shell was awarded the contract. What I'm going to do as a first course is understand the process by which it was selected. I don't think anything has been signed by the government."

Based on what I read in the first paragraph there is no need for a statuary board. LMAO

Just like I thought. . .IGNORANT AS A PIECE OF BOARD. . .OR JUST A POLITICAL WET BLANKET. . .you reallllllyyyyy need to go a get yasef some good sense or learning man!!

" their focus is to implement policy and not to interfere in the day-to-day operations of the electricity provider." How in the name of all that is Good can they implement policy without getting involved with operations? They are not to interfere with the HIGHLY QUALIFIED MR. Heastie. Why bother to have a board is right. What about a GOOD MANAGMENT TEAM simply doing its job? It's not like the 'Board' has ever protected the interests of the Corporation shareholders. The Unions protects the interest of the workers and interfere constantly. It really is baffling........

Do you understand the difference between a board and a management team? Apparently you have no idea. . .please stop being so dense. . .it een that hard to understand ya know. . .GO DANG READ. . .YA HEAR!

I have a very good idea and repeat that none of the so-called Boards of Bahamas Government Corporations ever serve their purpose so they are a total waste of time and tax payer's money. Capiche?

A rubber stamp board. Do as you are told. What in the world is this?

And not exercise their Bahamian propensity to Micro-manage? What on earth will they find to mess with otherwise? No Slight to the individuals on "new" board but wow, Talk about the Kettle calling the Pot black! Political micro-management created this abysmal state of affairs, and continues.

DDK, I noticed that glaring adjective as well - highly qualified. As if the new board is to swallow all things hook, line, and sinker. Desmond really thinks we have "STUPID" written on our foreheads. Obviously, the former board wanted too much due diligence and documentation for his "deal". They just got in the way of his and other people's pocket. Why waste these good people's time?

what in the world is this? this is the way things are suppose to be,so long have we done things the wrong way ,and never knew any other way, now brothers shutup for a change and watch the NEW SHERIFF,in action,them days of alibaba and the forty theives are gone now you are going to have to work for them trips to europe,cause you scared to go to the states,for fear of....well you know, let us all wish these boys do not fail,cause if they do we the people lose,lets lay back and watch the shew

Finally someone who know what they are talking about. . .BROADS DO NOT RUN DAY TO DAY MANAGEMENT DECISIONS. . .THEY SET EXECUTIVE POLICIES. . .

this is the first board in the bahamas that represent all of the races of OUR country,history is atlast been made,now i can die in peace,isnt that beautiful?