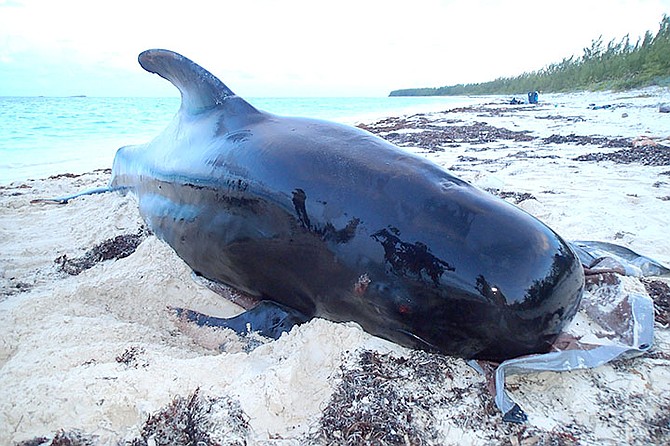 The body of a pilot whale that had been cut open in Abaco. After efforts to save the animal were unsuccessful, the young adult female pilot whale was laid to rest on the beach.

A LIVE pilot whale was sliced open and left to die on a beach in Abaco by someone suspected to be looking for ambergris, a highly-sought after substance found in the intestines of some sperm whales and used in making perfume.

Pilot whales do not produce ambergris, so it is suspected the animal was attacked in vain by someone ignorant of the law protecting marine mammals as well as how the whale secretion is made.

Although representatives of the Abaco-based non-profit group Bahamas Marine Mammal Research Organisation responded on Thursday to the report of a live stranded whale on the beach just north of Crossing Rocks, Abaco, they were unsuccessful in saving the marine mammal. It died a day later, last Friday, despite the efforts of more than 20 people over two days, including children, to save the whale.

The perpetrator could face a $25,000 fine and/or up to 18 months in prison for the “despicable act”, the group said.

“With the help of Crossing Rocks community members, BMMRO’s team was able to push the 11-foot young adult female whale back out to sea but had to hold it upright so that it did not drown,” a statement from the group noted. “Two sharks patrolled nearby. During the rescue, BMMRO scientist Dr Diane Claridge discovered a three-foot long and three-inch deep cut on the whale’s underside, deep enough to have cut into the muscle.”

Dr Claridge said the troubling discovery was not isolated.

“Sadly, this type of body mutilation has been observed previously in the Bahamas on a dead dolphin, but I never imagined anyone cutting into the body of a live animal,” Dr Claridge said in the group’s statement. “I was horrified. There is absolutely no doubt that a knife was deliberately used to make this laceration. The cut was too straight to have been caused by rocks or coral, and the skin and blubber is not easily cut into, so it had to be done with some force.

“Additionally, the location of the cut on the whale’s underside indicated the person was looking for ambergris. As well as completely lacking compassion, the perpetrator was obviously ignorant of both Bahamian law and how to find ambergris,” the doctor said.

Ambergris is a substance that sperm whales produce in their stomachs to help digest and pass squid beaks.

The BMMRO said only sperm whales produce the substance; however not all of them do, neither do dolphins or any other whale species, including the pilot whale which was mutilated.

“Sperm whales defecate the ambergris with the encased squid beaks, occasionally it is vomited instead, and the ambergris floats at sea until it is washed ashore,” the BMMRO noted. “During its time at sea and on the shore, its chemical properties change due to oxidation. Ambergris is highly valued for its use in the perfume industry, but only after it has oxidised.

“Ambergris in the stomach or intestines of a dead sperm whale is worth absolutely nothing (and smells awful). Furthermore, a whale’s stomach is not located on its underside but under the rib cage. Mutilating a whale or dolphin is not going to result in finding ambergris of any value but could result in a $5,000 - $25,000 fine and/or up to 18 months in prison.”

The BMMRO noted it is against the law to harm marine mammals in any way in the Bahamas. It has asked anyone with information regarding who conducted “this despicable act” to contact the Department of Marine Resources or Marsh Harbour police immediately.

The group said when someone discovers a stranded dolphin or whale, whether alive or dead, they should immediately call the Bahamas Marine Mammal Stranding Network at 242 -366-4155 to initiate the stranding response team.

“Assisting a living whale or dolphin should be done with caution because they are large animals and may transfer diseases but helping the animal to breathe and keeping it wet until experts arrive will sometimes save its life,” the group said.

BMMRO conducted a necropsy – an animal autopsy – of the pilot whale and samples were collected to determine the initial cause of stranding.

BMMRO scientist, Dr Charlotte Dunn, noted: “During the two-day event more than 20 people from Crossing Rocks, including children, assisted us, doing what they could to try to save this animal. This community support and kindness was uplifting and a great help.”

BMMRO thanked those from the Crossing Rocks community who helped during the ordeal.

Well we all know what the punishment should be for the perpetrator! Or do we. Bible 1 says... an eye for an eye. Bible 2 says... to forgive.

Dump the sicko in the ocean in the middle of the poor whale's family and let them decide. Ignorant greed was a terrible motivation for this crime. Big thanks to the folk who attempted to save the poor creature. Hope a reward might help capture the perp to be prosecuted (unlike the sicko in Freeport who murdered the poor pit bull and her pups).

Killed a defenseless animal for nothing. People of this world are so cruel...all around.

You see a stranded whale and the first thing that occurs to you is, how can I make money from this? What if your child were stranded somewhere?

This is the saddest news for the years. I hope the perpetrators are found and charged to the fullest.

Is The Tribune going to correct this story in light of the new information that came out or was that information also incorrect or even false.

I remember when Bahamians were by and large a decent sensible people! Those days are long gone!

The ‘other ‘ claim is that this whale was cut open AFTER it expired and an autopsy was performed to determine cause of death ( parasitic infection). But even if this was the case, those who allegedly performed the autopsy should have contacted the relevant authorities to have the carcass properly disposed of.