Face To Face: Goofing Around In Class With The Future Pm - What Would Come Next? 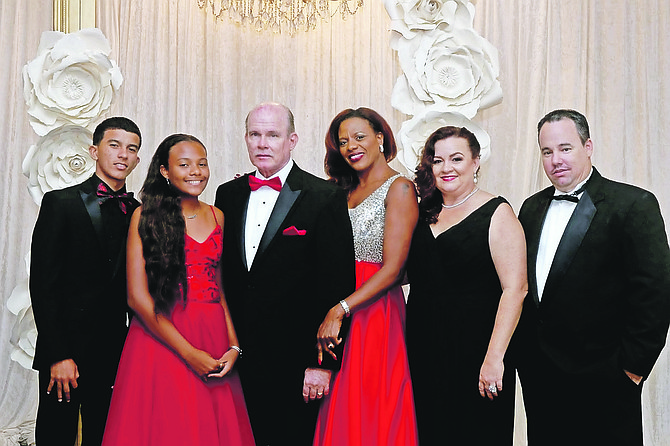 Too often when we see successful people, we automatically think they had it made or the road was well paved for them. We look at where they are today but don’t know what it took them to get there. Since I began interviewing people for Face to Face nearly a year ago, I have come to realise many of the affluent people in this country did not come coasting down an easy road. In many cases, decades of sacrifice got them where they are today. The column exists for this very purpose – to do away with assumptions and shed light on the truth about people’s lives so that we can all take away important lessons from their experience. 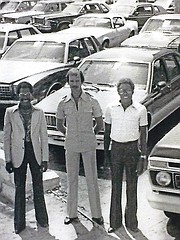 A 1979 photo of Frederick and two salespeople posing for a photo used for an advertisement in The Tribune.

In this case, I was highly impressed by the tenacity and wit of L Frederick Albury, a young boy from Palmdale who grew up in a home of modest means, never went to college, yet became one of the biggest names in the automotive industry in The Bahamas.

He is the son of Lionel Augustus Albury of Marsh Harbour, Abaco and Lurey Albury (of the Curry and Gates clans) of Green Turtle Cay. Like many Abaconians back in the day, they married and migrated to Nassau to look for work, settling in the Palmdale area. Lionel was a carpenter by trade while Lurey worked in housekeeping at the Montague Beach Hotel. Together, they raised their children Jeffrey, Lionel (Frederick), Carolyn and Arlene and worked hard to provide for them.

Frederick enjoyed his days growing up in Palmdale, especially with the camaradarie of fellow Abaconians. He was able to visit the island during summer breaks, like many of the kids. Back then, people’s properties were not closed off from one another. They were connected by gates and children could pass through from one yard to another without having to run about on the streets. They would, however, ride bicycles together. This close knit setting would bode well for his upbringing.

“Life was great growing up in Palmdale,” he recalled, attributing a part of it to his experiences affiliated with Calvary Bible Church where many of the residents in the area worshipped. 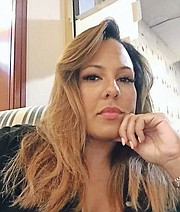 “On Wednesday evenings, the kids would gather at Home Furniture, where the owner Mr Roberts would loan a truck for the youth camp. All the kids from the neighbourhood would meet there and get on the truck and head to Gladstone Road for an evening of camping.”

Frederick attended St Thomas Moore Primary School right in his Palmdale neighbourhood, and then continued on to St Augustine’s College. His father maintained the family as it grew and his mother became a homemaker. He found work at British American Insurance and then with Home Furniture Company as a credit collector. Later he went on to work at Commonwealth Bank when it first opened its doors, originally under the name Commonwealth Industrial Bank. As a seasoned collector, he became valuable to the bank and worked his way up to the manager of the mortgage department.

Frederick’s parents pushed him and he took on the challenge to attend St Augustine’s. It was an all-boys school with a rigorous learning schedule that started at 8 in the morning and ended at 5 in the evening. It wasn’t until Frederick was in Form Three that the all-girls school, Xaviers, was amalgamated into St Augustine’s. The discipline at the school, he said, was “hard and firm” under the leadership of Father Bonaventure Dean and Father Burton. 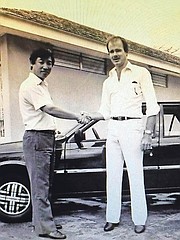 Frederick Albury with a Hyundai representative from South Korea.

He comically recalls an incident in which he and the current Prime Minister Hubert Minnis were “goofing around” in the back of the class. The Dean of the school would use a leather barber strap to discipline students. The boys “assumed the position” with their hands on the table to receive their lashings, but Minnis got the worse end of the deal on that occasion and to this day, he jokes with his childhood friend that he took a lashing for him. However, the discipline and the Catholic education, with teachers like Vincent Ferguson and Leviticus Adderley who “helped turn young boys into men”, paid off as many of his classmates are the movers and shakers of today’s society including former Chief of Justice Michael Barnett and current University of The Bahamas President Dr Rodney Smith.

Life was not easy for him even though he attended the prestigious school and at the age of 12, he helped to support himself by getting a job at Nassau Bicycle company where he earned $2 a day. At the age of 14, he worked as a packing boy at JD Albury and Sons grocery on the weekends.

“Mom and dad were not rich by any means, they could not afford to put me through college and I was no rocket scientist academically at the time” Frederick said.

However, he was fortunate to have found his career path early. His brother Jeff, eight years his senior, became a shareholder in the used car dealership owned by Kenneth “KC” Cartwright. He began working at the car lot after school, on weekends and holidays and found something he truly loved. He even saved up and purchased his own car. “I found my passion in automobiles,” he said, and I sought to know them inside-out.”

Frederick graduated from SAC in 1971 and a year later, he and Jeff started Quality Auto Sales Ltd, selling cars from a gas station Jeff was involved in. After that, the brothers gained their own location between Elizabeth and Victoria Avenues.

“I learned how to clean a vehicle and dress it up,” he said. “I learned about marketing. I learned certain things from the accountant. I learned everything I could about the industry. It was the university of hard knocks but it was a good way to learn.”

In 1979, Quality Auto Sales Ltd moved to East Shirley Street. Up to 1982, used cars remained the mainstay of the business. But there was a growing trend in new car sales and the brothers responded. They obtained the rights to sell brand new Suzuki vehicles for The Bahamas. A year later, the company was approached by the now giant South Korean brand Hyundai to represent them. This allowed them to sell new small Suzuki vehicles and the bigger Hyundai models.

By 1990, following the struggles of ABC Motors Ltd, Frederick was successful in adding the Toyota brand to their group of companies after tough negotiations. The first fleet arrived in 1992. Executive Motors Ltd. started with the Toyota brand at their Collins Avenue location but due to demands, a larger facility was required. In 2002, the former John S. George property became available and the company was able to relocate in 2006 where it remains today.

The Auto Mall Group of Companies includes Executive Motors, dealers of the Toyota and Lexus brands; Quality Auto, which promotes Hyundai and Suzuki vehicles; and Omega Motors established in 2011 (headed by his son Lionel James), which covers the BMW and Mini brands. The company also has a branch in Freeport, Grand Bahama. In 2003, Quality Auto Sales Ltd and Nassau Motor Company came together to start Abaco Motor Mall Ltd to represent both companies in the Abaco market. The Auto Mall group of companies has since expanded to include hybrid vehicles, after the FNM government’s incentive in 2010 offering lower tariffs for these vehicles. Today, it is the leader in hybrid auto sales and also has a Wulff Road location. The company also offers a parts and service section. Today, the umbrella company supports around 100 employees.

Frederick is still learning even today as the automotive industry is always changing. He stays in constant contact with his suppliers and attends international conferences to learn as much as possible and adapt his business to the changing trends.

“Times are changing, technology is changing at the moment, and we are in a new industrial revolution in which we will see massive changes in the automotive industry in the next five years” he advised.

“Every four years, Toyota has a world conference in Japan. We go there to get the reports on what has happened in the last four years and to get the vision for the next four years. Toyota is investing in its TSS (Toyota Safety Sense) which allows vehicles to just about drive themselves with the exception of steering. There are sensors in the front of the vehicle that will automatically brake if you come too close to a car in front or speed up when necessary. It will stop if a pedestrian steps in front of you. The wheel will vibrate if you fall asleep.

“As this equipment gets into vehicles, the next step will be putting in GPS tracking. Toyota is moving away from being just an automotive company; they are moving into mobility. Toyota is going to be a major sponsor in the next Olympics and the plan is to showcase its new products there in which they have invested billions of dollars in research, including electric buses, flying cars, electric scooters and a wide range of mobility devices including those designed for the disabled.”

The industry, he added, is moving away from regular combustion engines to hybrids, using a mix of gas and electricity. In 2015 during his visit to Japan, he drove his first fuel cell vehicle which runs on hydrogen and is a much quieter drive.

The Auto Mall continues to diversify to keep up with international trends and respond to the local market. Frederick believes much of its success occurred over the decades because of the great partnership that he and his brother has.

“I am the more upfront, face of the business, and he is more of the background with the banking and accounting, and it makes for a good partnership,” he said. “You have to have a passion for this. Most people get up and go to work because they want to earn a pay cheque. You have to be prepared to put in extra hours and learn about the product. You have to be concerned about your clients, your consumers and their welfare. You also have to not be greedy and milk the company’s profits if you have a few successful years. We pay ourselves a salary just as if we were working anywhere else and the profits are invested back into the company.”

He doesn’t seem to be ready to slow down any time soon. In his downtime, he loves visiting his beloved Abaco and going deep sea fishing with his mates. He is husband to Daisy Albury (nee Moss) and is father to four children of his own and two step children, all of whom he considers his children. They are Lionel James, Natasha, Nadia (Miss Bahamas 2002), William Miller (2015 NAIA Indoor Track and Field National Champion), Ernea Miller (who has her private pilot’s licence), and his youngest Adiza Anne Albury.

Frederick and Daisy are also proud grandparents to seven grandsons.

Sounds like a wonderful story but if Mr. Albury is serious about staying in the auto sales/service industry then I strongly suggest that the hit or miss service department gets their act together because that is where they are losing established customers and future sales customers.