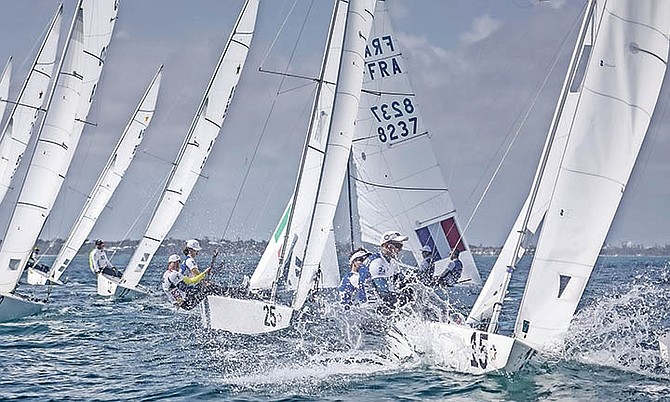 FROM wily old sea dogs to the latest fresh-faced talent, the top talent in our sport will take to the warm, azure blue waters of Nassau’s Montagu Bay this week for the Star Sailors League Finals, to determine the world’s greatest sailor - the ‘star’ of sailing.

The breadth of the field this year is exceptional. Across the 25 teams and 50 sailors are 21 Olympic sailing medallists and some of the greatest Olympic sailors of all time, such as Brazil’s Robert Scheidt, one of only three people ever to win five Olympic sailing medals, to Britain’s Iain Percy who holds two golds and a silver.

Percy is competing at the Star Sailors League Finals for the very first time and following the tragic loss of his long term crew member Andrew Simpson, will sail with an old on-the-water adversary of his and Bart’s – Swede Anders Ekström, himself the Beijing Star Olympic bronze medallist and World Champion with Freddy Lööf.

Lööf, another triple Olympic medallist and the last gold medallist in the Star class is back, this time sailing with Italy’s Edoardo Natucci, a previous winner of the Star Sailors League Finals with George Szabo in 2015.

Unusually, Lööf’s London 2012 gold medal-winning crew is also competing here but as a helm - Max Salminen competed at Rio 2016 in the Finn and was 2017 World Champion in the heavyweight men’s singlehander.

Others from the generation of sailors who made the transition from the Laser or the Finn to the Star during the 2000s include New Zealand’s Hamish Pepper, who was World Champion in the former Olympic keelboat in 2006 (sailing here with the 2002 Star World Champion, Britain’s Steve Mitchell).

France’s Xavier Rohart, the Athens 2004 Star bronze medallist, is back once again with Pierre-Alexis Ponsot. Although he never coaxed out an Olympic medal, the USA’s Mark Mendelblatt returns as the Star Sailors League Finals’ most successful competitor having a 3-1-1-3 record here with his London 2012 crew Brian Fatih.

Always making the top 10 here in Nassau, having competed in every edition of the Star Sailors League Finals, is Poland’s Mateusz Kusznierewicz, a two time Finn Olympic medallist, sailing as usual with Dominik Zycki.

Taking time off from his duties as helmsman for the latest Luna Rossa America’s Cup challenge is Francesco Bruni, sailing here with Nando Colaninno and hoping to improve on his 10th place finish last year. Also in this group is Norway’s Eivind Melleby, last year’s Star World Champion, sailing with the USA’s Joshua Revkin.

One of the strongest entries is likely to be Italian three time Olympian Diego Negri. The present leader of the Star Sailors League ranking ahead of Robert Scheidt and Paul Cayard, Negri has as his crew German Frithjof Kleen, who won Star Sailors League Final last year with Paul Goodison.

Kleen comes to Nassau race fit from the Star class’ Commodores Cup in Miami and also having spent the year coaching and training up new Star boat sailors out of the Star Sailors League training centre he runs in Riva del Garda. Many competitors have passed through the centre this year.

“This time I think the old Star sailors will really have to watch out, because the young guys coming through are not only fantastic sailors, but this time they are also prepared,” Kleen warns. “Those who haven’t trained are going to look very stupid!” As to sailing with Negri, Kleen says they ran a successful campaign in 2012-2013. “I know him very well – both his good and bad sides! He always made it through the round robins. We know our boat and our sails - all these variables are knocked out. Now it is all about us, but it will be tough as it is every year.”

Since its inception the Star Sailors League has also invited the top of the latest crop of Olympic sailors but this year has surpassed itself with five champions fresh from the Hempel Sailing World Championships in Aarhus: Rio 470 gold medallist turned 49er World Champion Šime Fantela and Laser silver medallist and two time World Champion Pavlos Kontides and the reigning 470, Finn and Nacra 17 World Champions, respectively Kevin Peponnet, Zsombor Berecz and Ruggero Tita.

For both Fantela and Kontides this will be their second time at the Star Sailors League Finals. Kontides, who is Cyprus’ only ever Olympic medallist (in any sport), is in with a particularly good chance, sailing with one of the most experienced and successful Star boat crew in German three time European champion Markus Koy.

“It is a great feeling to be able to compete against the sailing legends, the people I grew up looking at, admiring and getting inspiration from, who helped me to set my goals and dreams high. Having the chance to be on the same start line as them is fantastic,” said Kontides.

“We are all sailing at a very high level and it is boat-on-boat,” Kontides said. “Of course you have to respect the rules and the best one will win. For us, not being from the Star class, it is not easy to know what to expect. We are not familiar with how well we will be able to perform or how badly.”

According to Kontides, Paul Goodison’s victory in 2017 has given hope to competitors who are not Star veterans.

“You make steps forwards fast. When there is some breeze and you have to hike more, it is easier for the Laser sailors to have good steering technique and it is much easier if you make a slightly mistake to accelerate the boat back up again,” he said. “In light winds it is harder and you need more experience. It is easy to slow the boat down, but then it takes longer to get it back up to speed.”

This year the Star Sailors League also features its youngest ever skipper in Guido Gallinaro, the 17-year-old Laser Radial Youth World and European Championship from Italy.

While hopes are being placed on the young blades, in fact some of the top results in recent major Star events have come from the more ‘experienced’ end of the age spectrum.

Sixty four-year-old Augie Diaz was this year’s Star European champion and two years ago was World Champion, sailing with Brazilian legend Bruno Prada, who has two Olympic Star medals from when he sailed with Robert Scheidt.

Similarly, sailing legend Paul Cayard is back for his fifth Star Sailors League Finals, very much at the top of his game, having finished third at this year’s Star Worlds with Brazilian crew Arthur Lopes.

Among his numerous accolades, winning the Star Worlds 30 years ago, remains one of Cayard’s proudest achievements.

“I have put a lot of time into the Star starting with the Star Sailors League last year - I had a good result and that encouraged me to try hard,” says the 59-year-old former Whitbread Round the World Race winner and America’s Cup veteran.

“I bought a P-star, because I was a little slow downwind in the Finals last year, which has helped me a bit. I feel pretty good. Every year there are some new faces and they are all quality sailors. To be invited here you have to be an Olympic medallist or a World Champion or have some credentials for sure.”

He said the Star Sailors League Finals is the most unique, exceptionally good event in sailing in a long, long time.

“Everything from the format, the quality of the sailors to the concept of being able to race against a great Laser sailor or Franck Cammas, a great offshore sailor [who competed in 2017] or Xavier Rohart who is 105kg - you can only do that in the Star class. It is the perfect boat for that,” he said. “You see everything here, but before this happens, the SSL provides training for the people who don’t know the Star so it cultivates and nurtures sailing. The format where we have a constant knock-out on the last day is easy for the public to understand. In fact everything the public can’t understand has been done away with.”

Racing for the full fleet continues through the Qualifiers (from Tuesday until Friday), concluding on Saturday with the quarter-final, semi-final and Final Races.

You can follow all the action live and for free, streamed on the internet with expert commentary from special studio guests. On the water, the latest in hi-tech camera technology, as well as Virtual Eye 3D Graphics, will provide thrilling viewing.