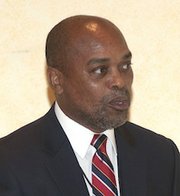 THE National Health Insurance Authority’s (NHIA) chairman yesterday defended the $1,000 premium costing for its basic package, arguing it had not been “pulled out of thin air”.

Dr Robin Roberts, speaking with Tribune Business following a presentation to the Rotary Club of south-east Nassau, said the NHIA has met with 80 companies, including some of the country’s largest private sector employers, so far during consultations on the revised NHI model.

“We have met with about 80 companies, including the big companies such as Atlantis, Baha Mar and Super Value," he revealed. "By and large they have been extremely receptive to what we are doing.

"The smaller companies, particularly when we went to Freeport, looked at the potential burden they have because Freeport’s economy is not thriving as it should be. We invited their input and we think that some of the comments they made are definitely worth taking.”

The $1,000 annual premium price for NHI's Standard Health Benefit (SHB), the basic level of care that is proposed under the revised healthcare model, has come under fire from both the Bahamas Insurance Association (BIA) and Bahamas Chamber of Commerce and Employers Confederation (BCCEC).

They have suggested it significantly under-estimates NHI's costs, given the expanded package of benefits/healthcare services being offered. And both organisations have argued that it is presently impossible to accurately price NHI given that it has yet to agree a fee schedule with providers, especially the doctors, and healthcare facilities. Such costs are the key driver of premium prices.

But Dr Roberts, defending the $1,000 annual/$84 monthly premium per worker, said: “That $84 was not pulled out of thin air. What we did was we looked at the national demographics. We looked at prostate cancer, for instance, which I am familiar with.

"I know that in the public system we are seeing some 80-100 prostate cancers a year. I can then say that in Doctor’s Hospital they may see 10 or 20 at most. Then I have to calculate all the persons who may have gone to Miami for their care.

"Let’s say we are looking at 150 or 180 persons. The figures we came up with was our best estimate, and then we doubled it by about 30 per cent so that we feel we are covered. That’s how we came up with our numbers. It didn’t just get pulled out of thin air.”

"What we would have liked was to get more exact numbers from the private insurance companies, but they never submitted that to us despite our requests. We are spreading this risk across the country and we are primarily using our government facilities and, in those instances, where we are using private facilities and can negotiate prices, we can leverage the volume of people we have so we can negotiate good prices.”

The BIA, in its response to the NHI scheme, warned that the $1,000 annual premium may "grossly underestimate" the true cost of the scheme's benefits and called on the Government to produce data and empirical studies that showed how it had determined the scheme's costs and employer/employee contributions.

"The policy paper proposes that the annual premium for the SHB will be around $1,000," the BIA said. "While this is a noble objective, the rationale and support for this regulated premium amount should be shared with private health insurers for review.

"Based on the limited details on the proposed schedule of benefits, we had assumed that the healthcare facilities and healthcare providers within the SHB network have reached an agreement with the NHI Authority to significantly discount their fees.

"However, we have since been advised by the NHI Authority that the negotiation of fees with healthcare providers under the SHB plan has either not commenced or not been concluded. The BIA has maintained that there is a strong correlation between private health insurance premiums and healthcare costs. The delivery of affordable, quality healthcare via the SHB with an annual premium of $1,000 may only be achievable if the facilities and providers' fees are materially lowered."

The Chamber, for its part, called for the SHB package’s costs to be "scaled down" to around $500 as this “would be more reasonable” for companies and the wider economy to absorb following July’s 60 percent VAT rate hike.

Its position paper warned that the $1,000 annual premium may be “too low” for the level of healthcare services it proposes to finance, and warned that “undesirable consequences” would flow from this - including the Government demanding ever-increasing sums from the private sector to make up the funding shortfall.

“Because we are not clear in terms of the specifics of how this programme will work successfully, we remain very concerned that the potential errors in the plan will then fall on the backs of businesses to fix,” Michael Maura, its chairman, said, “and by fix I mean the cost mistakes.

“Because there may be inconsistencies in the logic, gaps in the plan in terms of how it is successfully implemented and funded, once we get past the point of no return where the Government finds itself in a position where they will have to maintain the plan and move ahead they will look exclusively - as they tend to do - at business.

“Businesses will be the lifeguard from the standpoint of funding. Cost is a big part of it. This is not the private sector pushing back and questioning whether we should have NHI. It’s about the pathway to get there.”

Dr Roberts, meanwhile, yesterday suggested the NHIA was open to raising the NHI exemption threshold for businesses to at least $300,000 amid concerns that the existing $100,000 threshold is too low.

We all know that people get sick and we need to provide for them BUT you already have $100 million a year to spend on it, so use that first. It will cover a very large chunk of the cost.

Do not ask me to give you more money to "lose"

What happened to the doctor who was in charge before. What about all the work he had done. Now there is a Different Doctor . With his price of KALIK beer statements. Fat Cats doctors Sands, Minnis and Roberts.