Blaize Making His Presence Felt For The Eagles 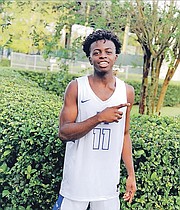 BLAIZE Darling Jr, a versatile track and field athlete and basketball player, is making his presence felt for the Master’s Academy High Eagles in Orlando, Florida.

The St Bede’s Catholic Primary School graduate, who left Queen’s College after grade nine, is helping the Eagles men’s basketball team to an impressive 3-0 win-loss record so far this season.

In their latest game played this week, Darling Jr scored a game high 28 points, six rebounds, four assists and three steals as the Eagles pulled off a 87-54 rout over Lake Howell.

Darling Jr, 17, made the transfer this year after spending the past two years at Lake Mary Preparatory School in Lake Mary, Florida, when he left the Bahamas in 2016.

“Blaize is a tremendous athlete that impacts the game offensively and defensively with his speed and quickness,” said Kohn of Darling Jr, who is also an exceptional sprinter and long jumper.

So far this season, Darling Jr is averaging 15 points per game with 5.2 rebounds and 3.1 steals as he’s shooting 48 per cent from behind the three-point line.

“Blaize has worked extremely hard on his shooting and now can not only blow past his defenders to score, but he can also make the open threes,” Kohn reflected.

On and off the court, Kohn said Darling Jr has been a pleasant student-athlete to work with.

“Blaize plays with passion and energy and it’s contagious,” he said. “He never takes a day off. He is a proven winner for us.”

The season is still early for the Eagles who have 22 more games to play. But Kohn said they are looking forward to Darling Jr playing a pivotal role in their success.

“The expectations are high to compete for a district championship and to make a run in the playoffs,” Kohn projected. “Blaize should be a big part of our success this year.”

According to Darling Sr, his son will probably do a year of college prep so that he could develop a little more before they look at competing at the next level in college.

After sending his son off to the United States in 2016, Darling Sr said he has no regrets of the progress he has made so far in high school. “The experience he’s had, not just in basketball, but the growth and exposure that he got, we couldn’t pay for that,” said Darling Sr, looking back in the mirror. “It was really God-ordained when he went. God was all over this thing because we had a conversation when he was in grade 7 or 8 and we talked about him going off. But at the time, I found a school that was really nice, but I wasn’t sure that I could find the tuition for it.”

However, Darling Sr said a few months later, Darling Jr attended a basketball showdown conducted by coach Curry and the same school, Lake Mary Preparatory, they had viewed before was here.

“After that, I saw this was God working,” Darling Sr pointed out. “We had some conversation with the coach and our family made the decision to do it. I couldn’t believe it.”

After spending the past two years at Lake Mary Preparatory where he was the “go to player” on the basketball team, Darling Sr said he decided t make the switch to the Master’s Academy High, which is more of a Christian school.

“If he would have stayed at LMP, he would have basically carried the team by himself because all of the seasoned players had graduated,” Darling Sr stated.

“So I didn’t want to do that to him in his senior year. I wanted him to experience not being overworked trying to carry the whole team. So he made the transition to the Master’s Academy.”

At Master’s Academy, Darling Jr is staying with a host family, whose son, Corey Sawyer Jr, is in the 11th grade at the same school, so he was easily accepted on the team.

“The family he is staying with, they love him like a son,” Darling Sr said. “The daddy was an ex-NFL player, Corey Sawyer Sr, and the mom, Gladymer Sawyer, is Puerto Rican. So a lot of her ways are like a Caribbean mother.

“His environment that he was able to go into was really good. It was just him going off and having to defend for himself or whatever. So that all worked out pretty good.”

Sawyer Sr was a fourth round 104 pick in the 1994 NFL draft as a cornerback for the Cincinnati Bengals where he played until 1998 before ending up with one season with the New York Jets in 1999.

While the focus right now is on basketball, Kohn is hoping that Darling Jr will be available to continue his track and field exploits for the Master’s Academy in the spring.