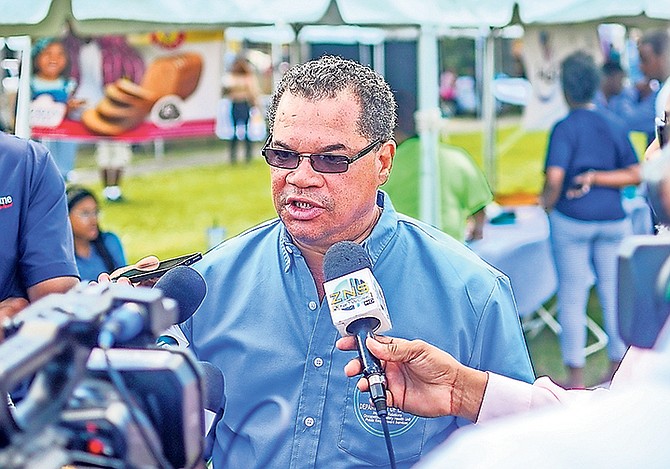 DESPITE announcing in June that the Minnis administration would have a renegotiated Oban Energies deal in a matter of weeks, Labour Minister Dion Foulkes said yesterday the government is still looking to pin down a firm date to rework the Heads of Agreement.

Speaking with reporters before Cabinet’s weekly meeting yesterday morning, Mr Foulkes, who co-chairs the Cabinet subcommittee looking into Oban, revealed a negotiation team has been appointed to renegotiate the HOA with the principals of Oban Energies, but noted no official date had been set to start those negotiations.

Mr Foulkes said in the interim, the government has adopted a technical report produced by the technical branch of his sub-committee.

According to Mr Foulkes, the technical team is composed of three Grand Bahamians who worked in the industry.

“We are currently in the process of notifying the principals and speaking to the negotiation team to get our terms of reference,” he told the press.

“I don’t want to go beyond that until I can get some specific information as to when we are going to start the renegotiation. We have a proposed date for January but, I have not spoken to the principals, nor the renegotiation team yet, so I do not want to release that information,” Mr Foulkes added.

The government’s initial agreement with Oban Energies sparked intense criticism, including points of opposition from several environmental organisations that took issue with lack of an environmental impact assessment, given the project’s risk factors.

The fallout prompted an admission from Prime Minister Dr Hubert Minnis that there were gross missteps in the government process.

“While our heart was in the right place, these missteps should not have happened. We must, we can and we will do better,” Dr Minnis said in March.

In the months following that admission, various Cabinet members have hinted at key improvements that would be made with a new HOA, but nothing concrete has been presented.

Oban Energies has reportedly spent $10m on the project so far, according to its president, Satpal Dhunna, who said a significant amount of those funds were used to nail down the best location.

Each day the world community speaks louder on this issue. The vast majority of scientists now see getting the drastic rise in CO2 emissions under control as humanities first and most urgent priority. This is not alarmism, as claimed by some. It is not alarmism when you yell "fire" in a crowded theater, when the theater is on fire. Same here. As one of the most threatened countries on this planet due to increasing sea level rise, it would do us good to start reading on the subject and learning what is going on. Oban under any name is not the way smart states move into the future. Quit forcing me to waste my time arguing against this ill-fated scheme. The end of fossil fuels is coming to an end. Wake up and smell the coffee. No to drilling for oil in Bahamian waters. No to Oban in any form

OBAN spent 10 million to nail down the best location. What they really mean is where the most dumbest people in any Government are roc wit doc. indeed.