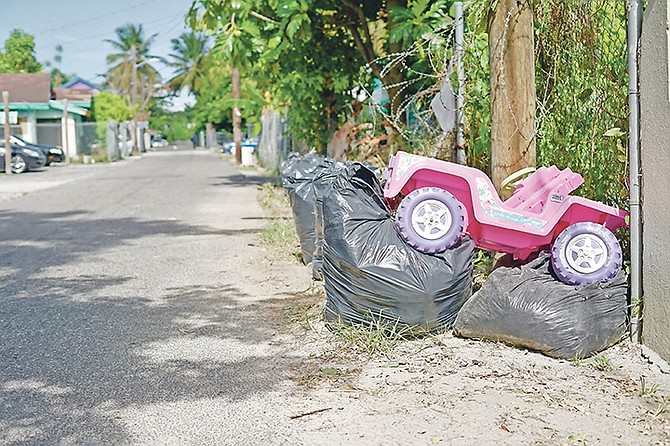 The Over-the-hill area of New Providence.

THE government’s Over-the-Hill unit has hired 42 people as environmental monitors after 80 applied for the job, according to Project Manager Rocky Nesbitt. Those selected include 24 women and 18 men, he said.

One of the chosen is 42-year-old Evano Adderley, a father of three who struggled for four months to find a job.

“To get a second chance, especially around the Christmas time when it ain’ much jobs around, I think that’s a great thing what they doing,” he told The Tribune this week. “Right now you can’t find no job nowhere. It was frustrating but when you believe in the Father he’ll do anything for you.”

Mr Adderley heard about the environmental monitor programme on the radio.

“I thought it was a good idea that they checking for the ghetto,” he said. “It will have a good impact. Sometimes the ghetto people be the last set they check for.”

For the 52-week programme, the monitors will identify and help get rid of bulk waste, derelict vehicles and other environmental hazards, helping the government to improve the look of the historically impoverished communities.

They will be trained at the Grants Town Wesley Methodist Church for two months but will receive their first pay cheque before Christmas, Mr Nesbitt said. The training they receive will involve Department of Environmental Health specific training, CPR and first aid training and NEMA Community Emergency Response Team training.

To be eligible for the programme, applicants had to be between 18 and 45, have a clean police record, be unemployed and live within the Economic Empowerment Zone, a part of the Over-the-Hill area that comprises Nassau Street to the west, Poinciana Drive and Wulff Road to the south, Collins Avenue to the east and Shirley Street, West Hill Street and Delancy Street to the north.

The workers will be paid $220 a week, Mr Nesbitt said.

The most publicised component of the Over-the-Hill initiative has been its tax exemptions programme for residents and owners seeking to renovate their homes and businesses.

But at the initiative’s recent town-hall event, the need for jobs was on top of many minds.

One resident, Christopher, made his plea directly to Prime Minister Dr Hubert Minnis and other programme officials.

“I’m a proud fella from Bain Town and myself and, Valentino Stuart, we been going around from January as of last year looking for contracts and work,” he said at the meeting. “We go through Ross Corner and we clean it up every month. No one ever paid us for doing it, but we do our part every day and all sorts of work going on, but unfortunately there is no work for us and we been going to every meeting, every Thursday and Tuesday and still to this day we ain’ get no reward.”

Yesterday, Mr Nesbitt said both men have been employed through the new programme.