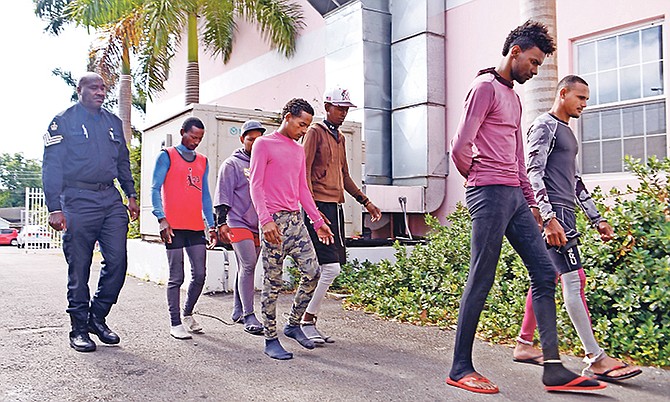 THREE days after they were apprehended by the Royal Bahamas Defence Force, seven Dominican fishermen were charged before the courts on Friday for poaching in Bahamian waters.

The RBDF patrol craft P-129 apprehended the Dominicans aboard two small go-fast type boats approximately 20 feet in length. The incident took place around noon last Tuesday in the area of Little Inagua. RBDF officers allegedly found the poachers with approximately 150 pounds of scaled fish and lobster on board.

Fausto Garcia, Gabriel Pailora, Carlos Duran, Ramon Lopez, Carlos Rodriguez, Elias Simon and Juan Duran all appeared before Magistrate Cara Turnquest in Court #11 and were charged with four offences under the Fisheries Resources Act: illegal foreign fishing within an exclusive fishery zone; possession of grouper during the closed season; and two counts of possession of a prohibited apparatus, namely an air compressor tank and spear guns.

In Friday’s hearing, all of the Dominicans pleaded guilty and were subsequently convicted and fined a total of $413,000 or face a custodial sentence.

Prison sentences are to run concurrently.

Prior to this incident, the Royal Bahamas Defence Force apprehended a total of 172 Dominican poachers and four Dominican fishing vessels with over 100,000 pounds of fisheries products in June, July and October of this year. The poachers were all charged and found guilty by the courts for various fishing violations, and sentenced to time ranging from six months to 18 months at the Bahamas Department of Correctional Services. Total fines awarded were approximately $7m.