Bahamas Feeding Network Gets An Extra $5,000 To Help Those In Need 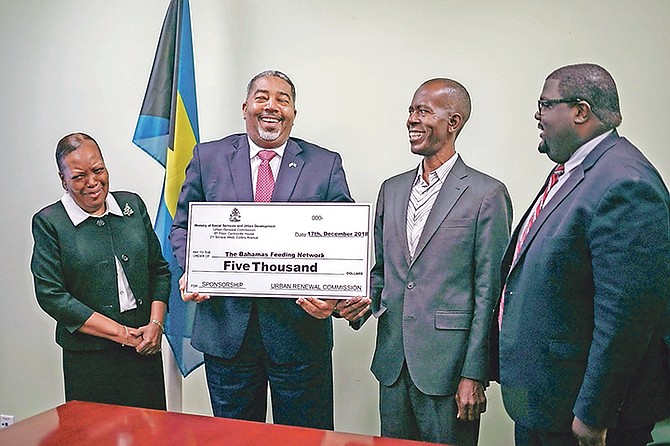 SOCIAL Services Minister Frankie Campbell announced yesterday that the ministry will donate $5,000 to the Bahamas Feeding Network (BFN) from the Urban Renewal Commission to assist citizens in need.

During a press conference, Mr Campbell admitted that “no amount of government programmes” could realistically accommodate every person in need of assistance.

He added that he is grateful for local organisations that have partnered with the ministry to help them in “adding quality” to the lives of the less fortunate.

“…We rely on our partners to kind of undergird us and give us that extra boost as we attempt to put in place safety nets for various aspects of vulnerable persons within our community,” he said.

Mr Campbell recalled a personal experience where he volunteered with BFN and helped to pack parcels and hand out food to what he estimated to be more than 3,000 individuals.

“I saw firsthand the impact of the work that the Feeding Network and Mr (Philip) Smith was having, and I committed myself right then and there that either as an individual, or as the minister responsible that we would partner with him,” he stated.

Mr Campbell said during meetings with BFN, officials discovered that the non-profit organisation hosts an annual campaign to feed 5,000 persons during the Christmas holiday.

“We looked through our budget and we wanted to makes sure we found something that would enable us to partner with them, and so we came up with $5,000 for five thousand,” he explained.

“We know it’s going to but scratch the surface, but we see it as a beginning and I do it to reaffirm my commitment as we move forward. As we go into the next budgeting period then I would look for more to ensure that we participate in a more substantive way,” he said.

Philip Smith, executive director of BFN, explained that the network has a team of about 100 members, including soup kitchens and churches, who cook and distribute over 2,000 meals on Sundays.

However, he admitted that the demand for meals has doubled as the Christmas holidays approach.

Speaking about the ministry‘s donation, Mr Smith said: “It’s very important particularly at this time. The Department of Statistics tell us that there are probably 43,000 persons that experience hunger.”

Mr Smith said it can be assumed that those figures have increased due to the harsh economic climate present that has affected many Bahamians today.

“I think that you will find that there are a lot of people that actually are challenged to eat,” he stated.

While the minister was unable to say whether there was an increase in people applying for government assistance, he did say that the ministry has not “exhausted” its existing budget. “I can say, based on budgetary figures, the ministry spent maybe about $12 million or thereabouts on food assistance, and so our budget in that regard is in that area…so we’re still continuing to assist,” he said.

BFN is a non-profit organisation made up of 13 establishments that joined together in 2013 to tackle the hunger crises in the country. The Feed the 5,000 Campaign is an annual drive to provide packages to families in need during the Christmas holidays.