Face To Face: ‘As A Mother, When Tragedy Strikes, You Could End Up In A Place Where You Forget About Your Spiritual Life; The Natural Kicks In And You Ask God: Why?’ 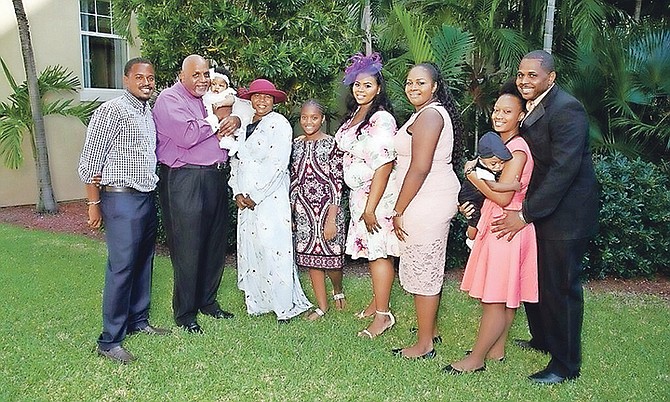 The Cooper family including, far right, Frahkan and his wife Dr Tina Adderley.

IT was really a shock to hear that Katherine Hilton, the mother of Ashlee Hilton, died just two weeks after her daughter was fatally shot by a gunman on the grounds of Sandiland’s Rehabilitation Centre. As the Hilton family prepares to lay both beautiful women to rest this week, many are offering their prayers and support and many are wondering if Katherine died from the shock and grief of losing her daughter so tragically.

The loss of a child can be one of the most painful losses in life – one that no parent would wish to experience. But it was one that Apostle Dr Flossie Mae Cooper (nee Moss) had to find the courage to deal with when she lost her first-born, Frahkan Cooper. The life of this vibrant young man with a great career ahead of him was cut short when the jet he was co-piloting with Captain Stanley Thurston through a rainstorm crashed with Dr. Myles Munroe, his wife and others on board. It was a tragedy the entire nation felt. For Flossie, it was one that changed her life.

In two days (December 20), Frahkan would have been 38 years old. For the past four years since the crash, his mother has been finding ways to cope. She went from not being able to pass a graveyard or stand seeing a hearse to writing two books that encapsulate her journey to a better place.

“As a mother, when tragedy strikes, you could end up in a place where you forget about your spiritual life; the natural kicks in and you ask God why?” Flossie said.

“Most of us will go to ‘why did this happen?’ But God gives us a space where we can come to him. A lot of us don’t hear God’s voice because we are not listening. When I asked God why he took away my son. I heard his reply. He said, ‘Your son? He is my son!’ Then I saw a vision of my precious son in the Father’s arms.”

She began to release her feelings by writing, which turned into the completion and release of her book: I Am That Mother. In it, she speaks about the steps she took to find herself back to a place of ‘complete balance’ after having been thrown off by the loss of her son. 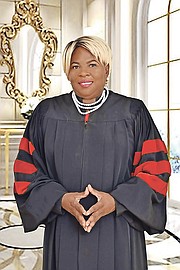 “Sometimes you feel like your finger is on the pulse and you got it all together. Life has a way of throwing that curve ball that makes one ponder,” she said.

“I feel personally at times a journal is what one needs to create in those difficult moments. The late Dr Meyer Rassin, my greatest role model, always emphasised an important conception of loyalty to oneself. Any one of you who has been in a dark place like me, please remember the Trinity (Father, Son and Holy Spirit) can turn opposition into a time of hope.”

On Sunday past, Flossie released her second book Let It Go at a special book signing event at her home. There, I got the opportunity to witness her loving family. Her husband, Pastor Jeffrey Cooper is the quiet yet demonstratively loving support of the family. The children rallied in support of their mother’s second book publication, and her daughter Jewel shared about the difficulty in accepting her brother’s death, which came just three days after she returned home from university.

Her daughter Jem, son-in-law Marvin and granddaughters were all on hand to support Flossie, who is also a Justice of the Peace. She sums herself up as a mother, wife, co-pastor, author, motivational speaker and dream interpreter. She is a former educator, chairman and founder of The Bahamas National Allied Health Provider Association, and president of the Queen Mary Sewing Guild, which will be distributing warm clothing and care packages to shelters and homes for the children and elderly this Christmas.

“Let It Go are three of the most powerful words for therapists the world over. It is an important command for anyone holding on to past hurts, because these things can weigh us down and even make us sick.

“I’ve learned first hand that holding on to pain profits us nothing and definitely doesn’t fix the situation,” Flossie advised. “We live in a world filled with uncertainty and disappointments, but we’ve been given the power from our heavenly father to overcome every situation we’ve been faced with. Let It Go shares my own personal experiences – my triumphs, my downfalls, my highs and my lows. In my book, I share my experience of letting go and I’m excited to teach you how to do the same.”

Her latest book covers chapters including: The Power of Forgiveness; A Decision to be Bitter or Better; Walking Alone; My Journey to Freedom; Knowing God; and a Time for Restoration. Her book comes with the encouragement and support of her husband and children Frahkan (deceased), Jaykano, Fay’jen, Jewel and Jem, as well as her daughters-in-law Tina, Anya and Sarah, son-in-law Marvin, six grandchildren and “hundreds of spiritual sons and daughters”.

The Coopers have a special mission – they are the founders of a parenting ministry that helps other parents who have faced their same plight of losing a child. The ministry also helps with parents in need of counselling and guidance, or support of any kind. They visit homes of parents whose children were terminally ill or even pronounced dead, like their daughter Jewel was when she had meningitis at the age of three. She miraculously recovered and this recovery is how their parenting ministry was birthed. That was nearly 30 years ago. Today, the Coopers hold regular parenting ministry and praise and worship sessions on Sundays on Soldier Road, they host sessions at the Department of Social Services, and they bring together experts from various fields to help young and even old parents in any way they can.

Even without knowing, Flossie may be doing something for others that her own parents needed. When she was born in the settlement of True Blue, Crooked Island, her father Wilfred Moss went to work on ‘The Contract’ in the United States and her mother Minerva, who was also a Moss but not married to her father, left and went to Nassau.

From birth, Flossie was first raised by Bishop Elikam Ferguson and his wife. Bishop Ferguson will be buried on Sunday coming. For ten months of her life, she was also raised by the grand-mother of Dr Bernard Nottage there on Crooked Island. By the time she was two years old, her grandmother Mary Hanna-Moss took her and as she grew, gave her strong “parental rearing and fundamental Biblical standards”.

By the time she was 11, her grandparents sent her to Nassau to live with her mother, who by that time, was married with five other children. While attempting to adjust to the Nassau lifestyle, she received a letter from her father, which her uncle had passed on to her. The letter was to let her know that her father did not forget her and as a matter of fact, he wanted her to move to New York City and to come and live with him. He promised to arrange her flight and take good care of her. She had only been in Nassau for six months, but she was ready to move on and see her father.

“I told my mother that I got a letter from my dad in New York and he wants me to come and I am going; I don’t think she believed me at first,” Flossie recalled.

“Imagine an 11 year-old girl, having just come from Crooked Island with no electricity and no television, moving to Nassau and trying to adjust, and then moving to the Big Apple after just six months! My uncle took me to the airport and the stewardesses took care of me on the flight. It made a stop but I did not have to come off the plane. When I got to the airport in New York, my knees began to buckle. I just realised that I don’t know what my daddy looked like. It hadn’t come to my mind before then. I was too excited. I saw people of all different races collecting their luggage, and I saw a man coming towards me. I said, that’s my daddy. I ran into his arms and shouted, ‘Daddy!’. When I think back on it I said God had to be with me – supposed that wasn’t my daddy! But there was a connection between us.”

Flossie remained in New York until she was 20 years old. Her father, Bishop Wilfred Moss, was a minister in the African Methodist Episcopal Church in New York, so much of her time was spent in church and participating in community building efforts. Bishop Moss and his wife had ten children and Flossie got to see many of them being born during that time. She believes that God guided her path as her life experienced was enriched by being with her father and being able to travel with him throughout the United States and Canada.

Today back at home in The Bahamas, she continues to grow spiritually and has a passion for helping others. She is hoping that her books will help to touch even more lives.

“My passion is to preach to souls, strengthen families and build communities to help heal our nation,” she said.

To purchase a book, email Apostle Dr Flossie Mae Cooper at globalparenting@yahoo.com, or send her a whatsapp message at (242) 445-0156.