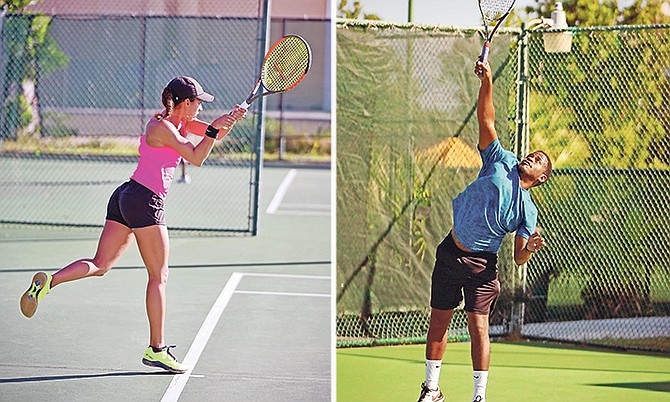 It was a clean sweep for Kerrie Cartwright, Danielle Thompson, Marvin Rolle and Kevin Major Jr as they closed out round robin play in the Bahamas Lawn Tennis Association’s 2018 Giorgio Baldacci Open Nationals.

Sydney Clarke fell short in joining the quartet, but she was extremely pleased with her 6-1, 6-0 triumph over Donesha Gibson on day two of the week-long tournament yesterday at the National Tennis Centre.

The 18-year-old Clarke was coming off her success in the BLTA’s hosting of the International Tennis Federation’s Goombay Splash Bowl last month when she captured the title.

On day one of the Open Nationals on Monday, Clarke was looking forward to her matchup with former arch-rival Iesha Shepherd. However, Shepherd sprained her right ankle in the first set of her first round win over Gibson and was unable to play Clarke.

“I was ready to play yesterday (Monday), so I had to make it up today,” Clarke said. 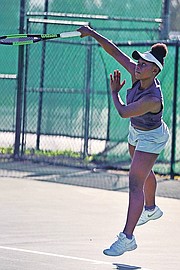 “But I stepped on the court and did what I had to do. I was a little up and down between the sets, but overall I played a good match.”

The victory in her final junior tournament has really inspired Clarke, who indicated that she’s looking forward to playing the top female players who are home, either from college or playing on the pro circuit.

“My game has improved tremendously since last year, so I’m just hoping to do well in this tournament,” she projected. “The competition is tough. The girls are back home, but I just feel like I have to give it my all.

“I just want to go out there and give it my best shot and play relaxed. I’m not really feeling any pressure right now. I will just play as best as I could.”

Morgan State University graduate Danielle Thompson didn’t allow 14-year-old Kinza Johnson to get into the match. Thompson, 24, applied the pressure from start to finish for her second round victory.

“Today (Tuesday) was a lot better than yesterday (Monday),” Thompson said. “I was able to get into a groove and played my points better. I was more aggressive with my selection of points, so I was happy with my play today.”

Now that she’s into the main draw, Thompson said she’s doesn’t have any expectations, except to play her best tennis and make the Fed Cup team next year. 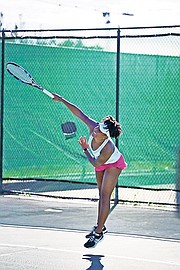 “I’m actually looking forward to playing doubles with Kerrie (Cartwright),” said Thompson, of her Fed Cup teammate. “We’ve never really played together, so I’m excited to see how that goes. Also, it’s always nice to be able to play Kerrie. She’s my role model. I look up to her. So I’m looking forward to that matchup if we have to play each other.”

Cartwright, in her second round match, swept Sydni Kerr in a 6-0, 6-0 decision as well.

On the men’s side, Kevin Major Jr continues to make his comeback after missing last year’s tournament as he made his transition from college to the professional ranks.

“I’ve been playing pretty well so I don’t really have much expectations. I rather play good and whatever happens, happens,” Major Jr pointed out. “I’m going to go out there and leave it all on the court and see what happens.”

With the field of players in the tournament, Major Jr said he’s not going to worry about anyone because he feels they have to be more concerned about his performance. “You can expect me to play much better the rest of the week,” he projected. “Win or lose, I will be playing some good tennis.”

Rolle in sweep over Michael Butler

After losing in a tiebreaker to 15-year-old Jacobi Bain on day one of the tournament on Monday, 35-year-old veteran Marvin Rolle took his frustration out on Michael Butler, easily winning 6-0, 6-0.

• In two other matches that the players didn’t even have to work up a sweat, Philip Major Jr won by walk-over against Macgregor Woodside and Baker Newman did the same against Bjorn Munroe.

The tournament continues 9am today with the start of main draw play.